The Hamilton County Democratic Party held a caucus June 27 at the Hamilton East Public Library in Fishers to appoint candidates for elected office that did not have a Democratic candidate in the primary. 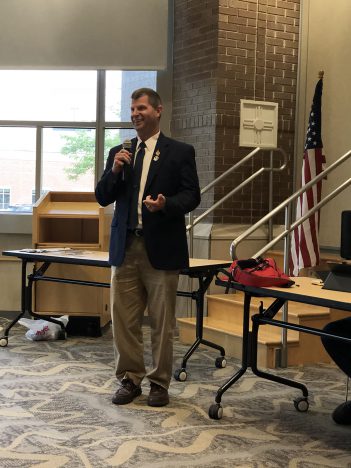 Jason Straw speaks on why he is running for Hamilton County Sheriff in the general election during a Hamilton County Democratic Party caucus June 27. (Photo by Anna Skinner)

Three candidates filed a Declaration of Candidacy at least 72 hours before the caucus. However, the party passed a resolution that allowed party chair Joe Weingarten to appoint candidates to fill vacancies at the time of the meeting. Four candidates voiced their hopes to run at the meeting, in addition to the three already filed. Seven candidates were appointed, six of which were in Current’s coverage area. They are:

The following are the remaining, opposed races in Current’s coverage areas: