You are at:Home»Current in Carmel»Carmel Community»City of Carmel works to quiet ice rink, building chiller after residents complain about noise 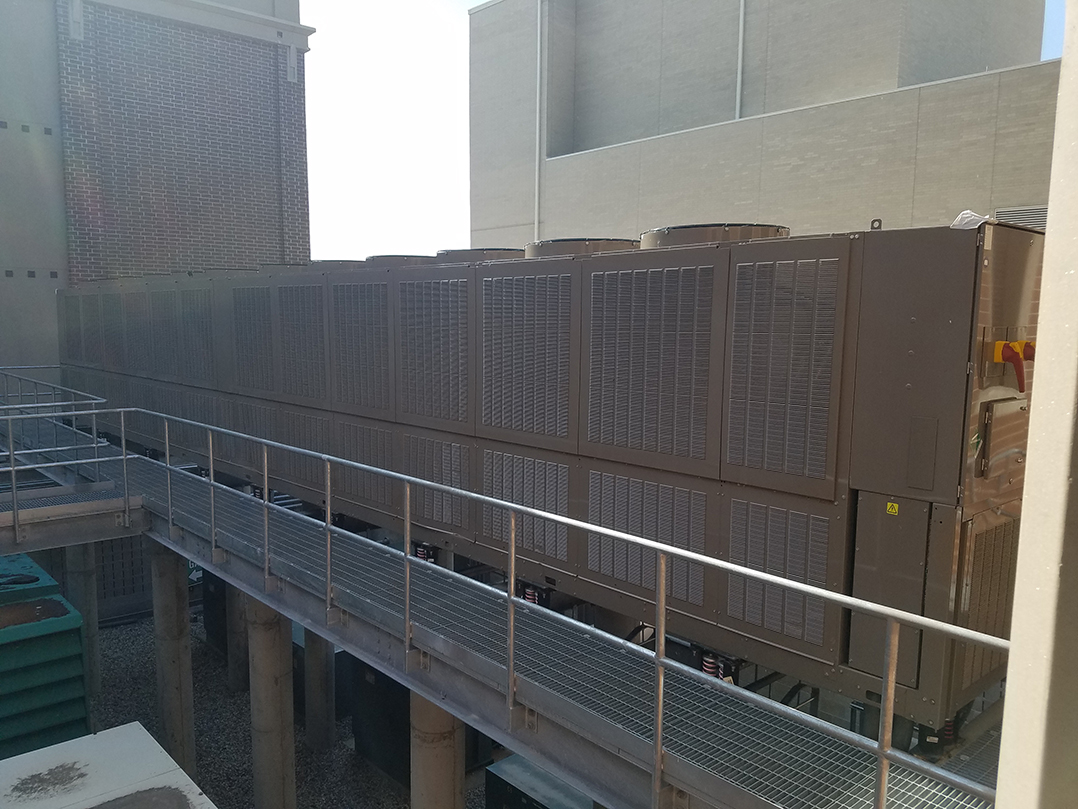 A chiller installed near the Mezz 42 apartments has been louder than expected, causing headaches for some nearby residents. (Photo by Ann Marie Shambaugh)

Carmel officials are hoping a piece of equipment meant to cool buildings and an outdoor ice rink doesn’t land anyone in hot water.

The city paid $238,000 to place a chiller on top of a brick structure between a parking garage and the Mezz 42 apartments, which is along 3rd Ave SW south of City Center Drive. Installation took place before The Ice at Center Green opened for its inaugural season in November 2017, but the chiller is used year-round because it also helps cool several nearby buildings, including The Palladium, police station and City Hall.

The chiller may be hard to see, but it’s made its presence known through sound. And many people who live and work nearby aren’t happy.

“Before the chiller went in, we could open up our windows without hearing the whine,” said Jennifer Mitchell, who lives in the Mezz 42 apartments on the opposite side of the building from the chiller. “In the wintertime it’s not even white noise, because it’s too high-pitched.”

The Carmel Redevelopment Commission spent approximately $30,000 in May to install a wrap to reduce the noise, which led to a 2/3 reduction in noise level, according to professionals who worked on the project. They also said the wrap has led to the noise level being near where the city expected it to be when the chiller was installed. People who live and work in the building said they’ve noticed a difference since the wrap was added.

But it’s still a problem for residents, Mitchell said.

“At night, if we lay down and go to sleep, you can hear it with the doors and the windows closed,” she said.

At least one resident moved to another apartment complex because of the noise, Mitchell said, and she knows of another using earplugs at night to block it out until her lease is up. Mitchell said she is looking to move elsewhere when her lease expires in October, with the noisy chiller a major factor in her decision.

She also said that one apartment near the chiller, which became vacant shortly before it was installed, has remained unoccupied. Carmel Mayor Jim Brainard confirmed that Anderson Birkla, which owns the building, has had trouble finding tenants because of the noise. He said the city is continuing to work to address the issue.

“We’ve talked with experts who say they can rebuild it so it virtually puts out no noise,” he said.

Brainard said the city has been aware of the noise issue since the chiller was installed and that it is part of a larger problem that dates back to the installation of the city’s nearby energy center. The city built the energy center several years ago to cool The Palladium and other buildings, but a faulty design led to it not being able to adequately do its job, he said.

For three years the city had been renting additional equipment at an estimated cost of $40,000 to $45,000 per year to help cool affected buildings. The chiller was intended to cool the ice rink on warm winter days and handle the load that the energy center wasn’t meeting in the summer, thus removing the need for rented equipment.

Brainard said the city has hired legal counsel and prepared a lawsuit against the designers of the energy center. The two sides are in settlement discussions, he said, and they have a tolling agreement so the city can still sue once the statute of limitations is passed if a resolution is not reached by then.

The city is also working with Anderson Birkla to remedy the situation.

“We have a good relationship with Anderson Birkla,” Brainard said. “We understand they have been damaged legally as a result of our contractors. We’re in discussions with them. We’re going to make sure the taxpayers are made whole and Anderson Birkla is made whole.”

An official from Anderson Birkla did not return a call for comment as of press time.

Even before it was turned on, the chiller caused problems for the City of Carmel.

The crew installing the chiller accidentally bent part of it as they attempted to put it in place.

“They were concerned it wouldn’t work and might have to get another one, but they were able to get the original one in,” Brainard said, adding that the mishap had nothing to do with the chiller’s loud sound.