You are at:Home»Current in Carmel»Carmel Community»After decisive primary victory, Thornton ready to prove a Democrat can win Indiana’s Fifth District

“I didn’t exactly set out to run for Congress,” she said. “It just kind of happened that way.” 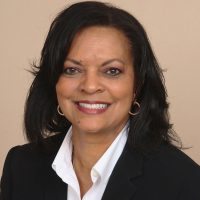 The Carmel resident beat out four other candidates May 8 to win the Democratic Party’s nomination for the Fifth District representative, a seat held by Republican Susan Brooks. The political newcomer believes she has what it takes to oust Brooks, an attorney and longtime civil servant in a traditionally Republican district who was elected to her current office in 2012.

To some, it may appear to be an uphill battle for Thornton to win on Nov. 6, but she doesn’t see it that way.

“It’s always been defined as a highly gerrymandered district. What I hear people say most of the time is, ‘You’ll have a hard time. You can’t win, because it was drawn up for you not to win,’” Thornton said. “I’m determined to prove them wrong.”

Ready for a change

Throughout her career as a business executive, Thornton had considered running for elected office – someday. The stars finally aligned this year, as recent changes in her career and family life made a run for office more feasible.

“I’ve had a great career. I’ve learned a lot and I have transferable skills I think would be beneficial in political life,” she said. “With the kids now gone, it gives me the time and the freedom to (run for office).”

The results of the 2016 elections gave her extra motivation.

“Part of what drove me to run for office is the lack of leadership and the lack of moral courage that we have in our current representation and our current leadership,” Thornton said. “That’s more important to me than a ‘D’ in front of my name or an ‘R’ in front of my name. It’s about moral character, and I think other people are feeling the same way.”

Thornton said the high number of candidates that ran for the Fifth District seat showed that residents are unhappy with their current leadership. She said she will do a better job of representing and connecting with constituents than Brooks.

“The biggest thing is lack of accessibility (for) her constituents. It’s like, ‘Where’s Susan?’” she said. “If you’re elected as a representative of the people you should make yourself accessible to the people. You’ve got to take the good with the bad. I’ve personally reached out (to Brooks as a constituent) and the responses I get are not satisfactory.”

Joe Weingarten, chair of the Hamilton County Democratic Party, said he was pleased to see Thornton emerge from the crowded primary and that she is a “phenomenal candidate.”

“She’s been traveling all over the district meeting with people,” he said. “Susan Brooks has fallen into the trap of voting with what the (Republican) party tells you to vote. It’s time to have a fresh face in there who is more concerned with the local problems.”

The Fifth District contains all or part of Hamilton, Boone, Marion, Blackford, Grant, Howard, Madison and Tipton counties. Since forming in 2000, it has only sent Republicans to Congress, but the gap between the parties has narrowed over time.

Thornton said she believes Democrats are gaining momentum, as evidenced by so many candidates choosing to run for a seat that typically offered voters in her party little choice. She said when she first moved to Hamilton County, Democrats tended to hide their party affiliation, especially in the business world. But not anymore.

“Over time, people are now living their true politics,” she said.

Thornton knows it will be a challenge to win as a Democrat in the district, but it’s one she’s ready to embrace. That’s why she’s been traveling throughout Central Indiana, meeting with voters and sharing her story.

“I’m focused on what I bring to the office in terms of not being a career politician and probably being more like the constituents I would serve (unlike Brooks),” she said. “It’s all about working families, and I think that will resonate with the voters.”

Thornton grew up in South Fulton, Tenn., the youngest of four children and one of the first to attend desegregated schools in her community. She earned a scholarship to play basketball at the University of Louisville, graduating in 1982 with a degree in communications and minor in computer science. She later got earned an MBA from Indiana Wesleyan University.

After college, she went to work for Xerox, which brought her to Indiana. She and her husband, Don, moved to Carmel 26 years ago, where they raised their three children, Brian, an assistant basketball coach at Ball State; Melanie, a business executive in Dallas; and Torrie, also a business executive in Dallas. Both daughters followed in Thornton’s footsteps, playing basketball at Carmel High School, and later for Butler University and Purdue University, respectively. Thornton has served locally on the Mayor’s Advisory Commission on Human Relations. If elected, Thornton said she doesn’t plan to become a “career politician.” She said she foresees serving in elected office for 10 years maximum.