You are at:Home»Current in Zionsville»Zionsville Cover Stories»A Place to Flourish: Calligraphy Guild of Indiana finds home in Zionsville 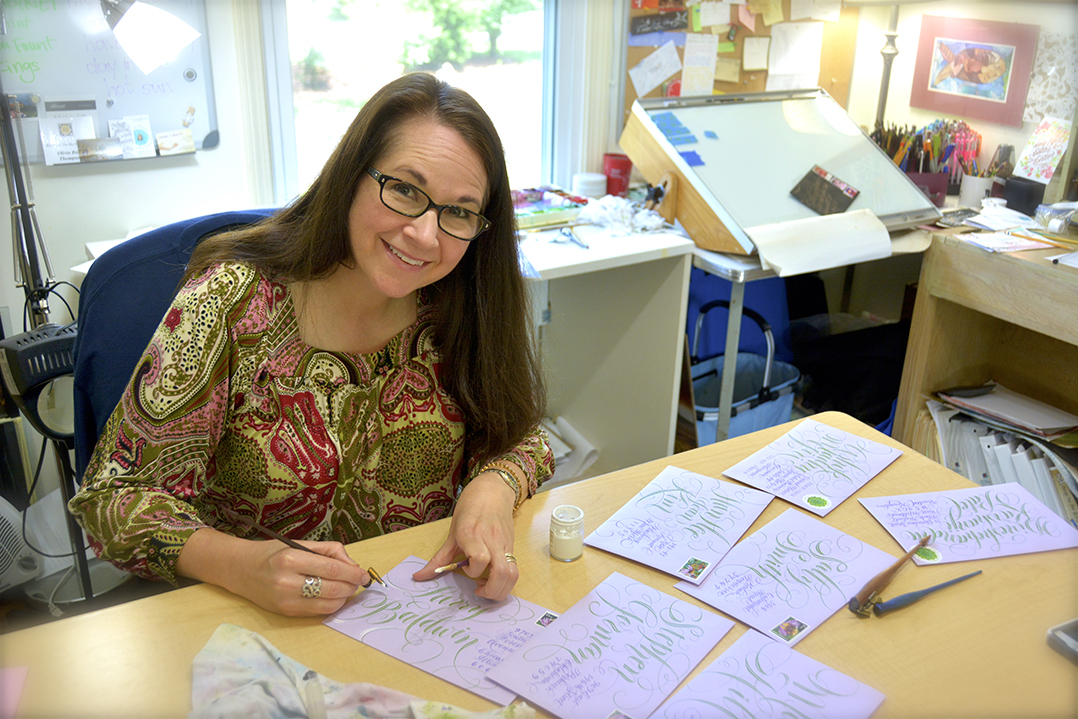 Julia Thompson, president of the Calligraphy Guild of Indiana, works on hand-lettered envelopes in her home studio. (Photo by Lisa Price)

Antique books. Coats of Arms. Wedding invitations. These are all places where one might find the art of calligraphy on display.

Simply put, calligraphy is an art form related to writing, particularly the styling of letters. Letters in calligraphy are painstakingly rendered using brushes or metal-tipped pens called nibs, a process which Julia Thompson, president of the Calligraphy Guild of Indiana, describes as “forming letters of quality.”

The Calligraphy Guild of Indiana formed nearly 40 years ago, in 1981, when Master Scribe Donald Jackson, of England, gave a lecture at the University of Indianapolis. The university’s Art Department called the group “The Alcuin Society” in honor of the Ancient English scholar and calligrapher, Alcuin of York. Eventually, the group began meeting off campus in Indianapolis.

During the past year, however, the Calligraphy Guild of Indiana has found a new home in Zionsville.

“We used to meet on Lafayette Road at Bate’s Art Supplies. The store shut down, so then we started meeting at an apartment complex’s café in Nora,” Thompson said. “We needed a meeting space. We were hunting high and low, across the whole Indy metro area, but it helped that I was from Zionsville.”

The guild now meets at Zionsville Town Hall and the SullivanMunce Cultural Center in Zionsville.

“This all just came together within the last year,” Thompson said. 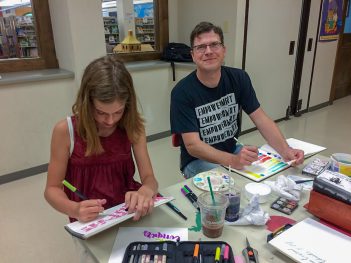 Guild meetings and workshops allow members to try new forms of calligraphy, test new tools and share their passion for the art with others. Famous calligraphers, such as Yves Leterme of Belgium, sometimes teach at the workshops, allowing members to gain rare instruction from masters of the craft.

“We send out a supply list so that people know what to bring,” Thompson said of the workshops. “If new members or visitors come, we have extras so we can share with everyone. Then we have a session where either someone is demonstrating or we are all doing something together. We’ve done different styles, which are called ‘hands’ in calligraphy. At the last meeting, we painted on rocks, which is something that nobody had ever tried.”

Like many guild members, Indianapolis resident Kathy LaPorte was drawn to the guild because of her lifelong love of calligraphy and her desire to learn more.

“All my life, penmanship and paper have been intriguing to me,” LaPorte said. “Even in elementary school, I loved to write and I loved the attraction that I had for different kinds of papers. I can’t remember exactly how I came across the info that there was a guild, but once I did I signed up and I’ve belonged ever since, and that was about 30 years ago.”

LaPorte has since held several leadership positions within the guild. She is currently the membership chairperson.

For LaPorte and those like her, the Calligraphy Guild of Indiana is about more than improving her artwork. It’s about forging a sense of community where artists can share their passion for calligraphy with one another.

“Three or four times a year, we sponsor an out-of-town calligrapher to come in and give workshops. There are also classes all over the country that we can attend,” LaPorte said. “There are a lot of different styles of lettering that we learn, but it’s the people I’ve met that have been truly special. We share a love of handmade letters and beautiful handmade work.

“I enjoy the camaraderie of the people that have the same interests that I have. There’s a narrow field of people who are intrigued with beautiful letters and letterforms and it’s educational and enjoyable to get together.” 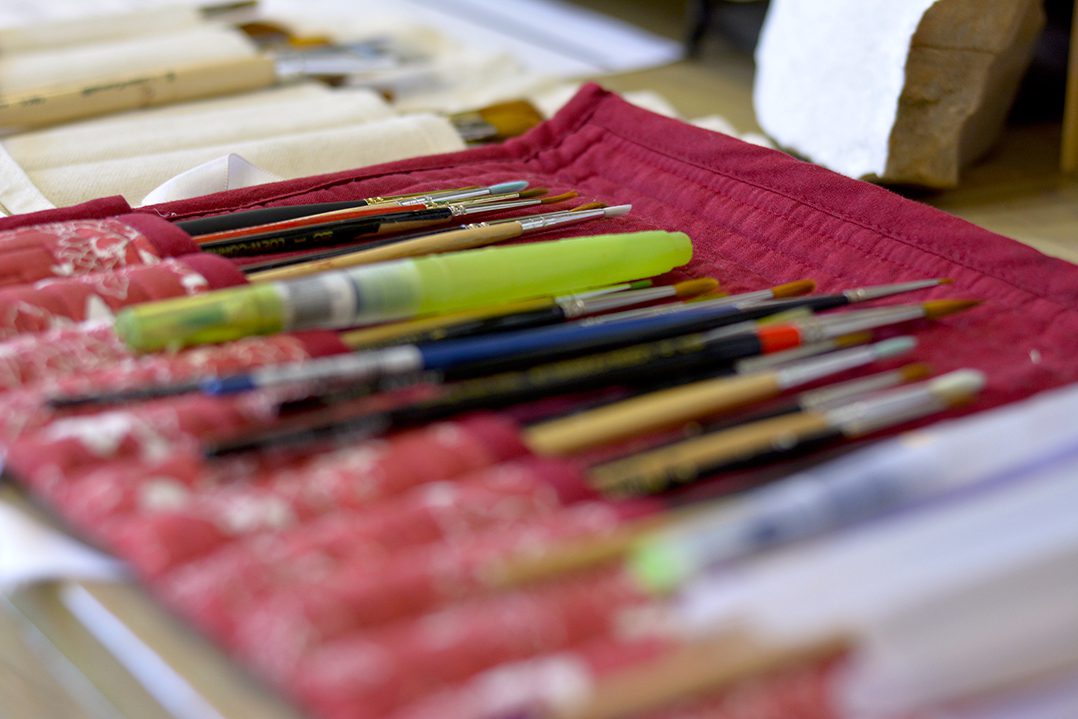 Calligraphy tools used by Julie Thompson and members of the Calligraphy Guild of Indiana. (Photo by Lisa Price)

Calligraphy does not require a big investment in equipment or tools. These basic tools will get an artist started with lettering.

Ink: There are many inks used for calligraphy, from pigment-based to water-based. Inks based in water contain color as chemically dissolved dye. They are thinner, usually not waterproof or lightfast, and dry with a more transparent look. When the work needs to last for many years,  pigment-based ink is typically used. A small reservoir is required to hold the ink.

Pens, Pen Holders and Nibs: The classic calligraphy tool is a “dip pen” or wooden pen holder with cork finger grip, with interchangeable metal nibs. Nibs come in a variety of sizes and shapes, allowing for diversity in style. Generally, dip pens have no ink reservoir, so the user must recharge the ink from an ink bowl or bottle.

Paper: On some papers, ink can spread and bleed, which is typically one of the first challenges calligraphy students will encounter. On the best papers, the ink will pool but not bleed. Many artists use 90 lb paper or watercolor paper pads.

Ruler: While graph paper is great for practicing letter forms, calligraphy artists eventually move on to heavier-weight papers.  Artists use a ruler to draw lettering guidelines before starting their work.

Pencil: An ordinary mechanical pencil is fine for drawing guidelines as long as the lead is not too soft, which creates smudging.