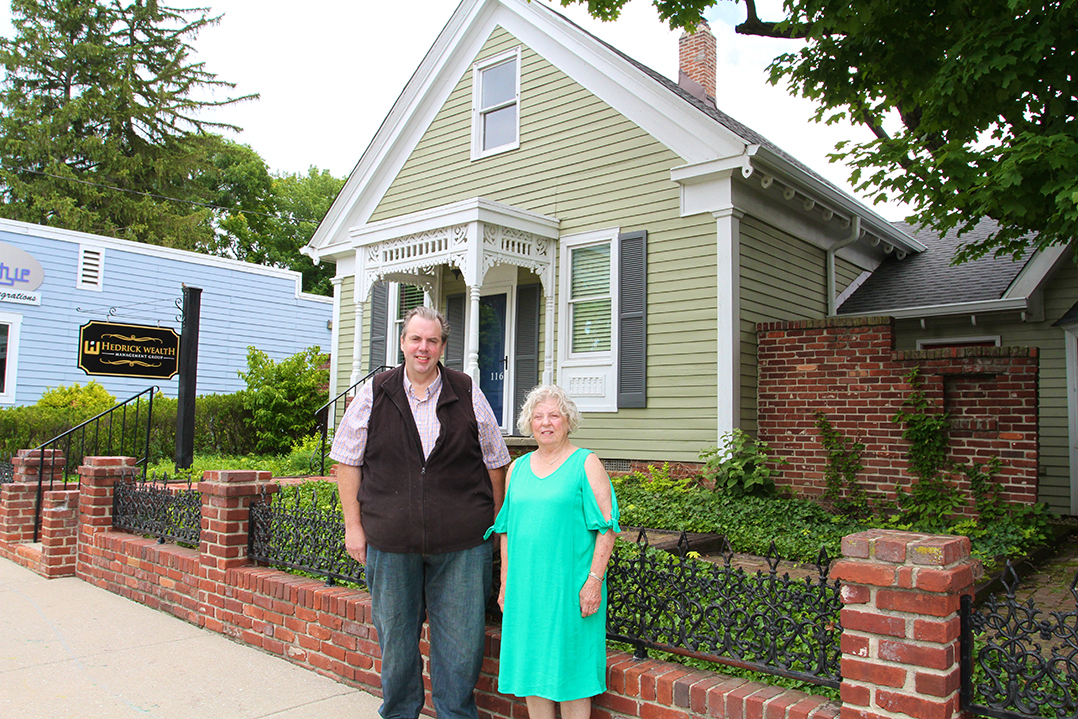 Westfield Preservation Alliance’s Bruce Hansen and Judi Shuck pause in front of a house in downtown Westfield dating to the 1800s. (Photo by Sadie Hunter)

Downtown Westfield already has an historic look, with some buildings near the Main and Union streets intersection dating back to the 1840s. But the Westfield Preservation Alliance wants the Westfield Historic Business District to be officially recognized on the National Register of Historic Places. 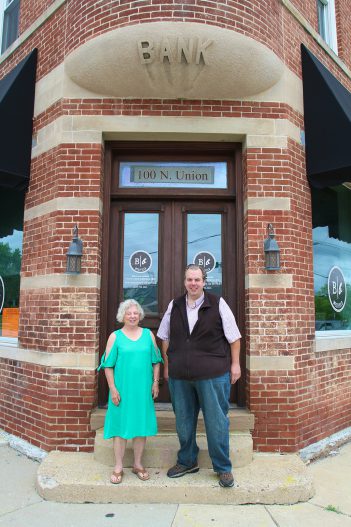 Westfield Preservation Alliance’s Bruce Hansen and Judi Shuck pause in front of the old bank building that was constructed in the 1800s in downtown Westfield. (Photo by Sadie Hunter)

Hansen said the alliance is not against future development in the city.

“Our main focus is really trying to preserve historic structures or places significant to the community,” he said. “What it really means is we always try to have conversations about history. When you have a living landmark, something physically still exists, you can carry on a conversation (about it). You can compare how a community grows to how they started. If you really want to create a relevant, vibrant, growing future, it always incorporates looking back on our past and appreciating it.”

The historic business district will include approximately 55 properties bordered by Penn Street to the north, Walnut Street to the east, Park Street to the south and Camilla Court to the west.

Hansen said the City of Westfield does an excellent job honoring its past while focusing on the future.

Another misconception about historic districts is that city or property owners cannot remove the building or landmark from the property. Hansen said that isn’t true. Rather, an historic district designation provides an opportunity for tax incentives and grants and creates an attraction for future residents.

“There have been people that assumed if that (a historic district) happens, a landowner or property owner or (organization) that owns the property loses the ability to control how the property is restored or improved or built upon or expanded. That’s not the case,” said Hansen, adding there are a few exceptions with significant, national historic sites such as in Philadelphia.

The designation allows property owners to apply for tax deductions or tax incentives and find ways to repurpose historic structures if they do not have the finances to do so.

Another plus to a historic business district is it attracts visitors to the city.

“It promotes and draws people in,” Hansen said.

Public hearings have been held, and the Westfield Preservation Alliance hired a consultant to work on the long process to receive the distinction. A private donor funded a portion of the consultant’s fee. Another public hearing will be announced soon.

“I think it means something pretty special,” Westfield Preservation Alliance Executive Director Judi Shuck said. “Being a fifth-generation Westfield resident, I’ve seen a lot. We’ve always had the richest history of any community in Hamilton County. I think this recognition is very important and very exciting for a lot of people.” 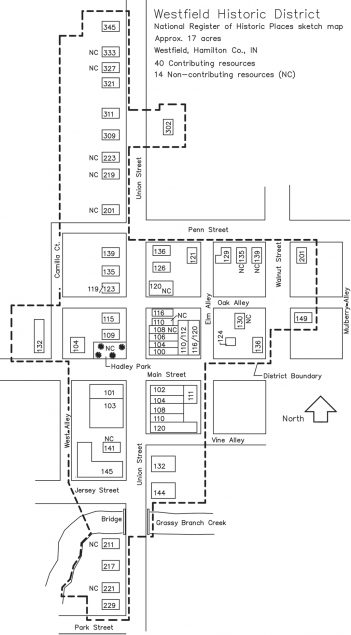 Hansen said according to a national registry, tourists with an interest in history and culture spend more money per day when visiting a city.

“The typical tourist who’s not interested in culture or history and is just coming because the hotels are affordable and the restaurants are close to the highway, those types of tourists spend $611 dollars in a town overnight, but a person who is more the type of tourist looking for something historical with heritage to it, that has a landmark to it, they spend $994 in a town overnight,” Hansen said.