You are at:Home»Current in Fishers»Fishers Community»Fishers High School sophomore Jones puts hammer down in nationals

Jones, who will be a sophomore at Fishers High School in August, has been doing the hammer throw for nearly 1 1/2 years. 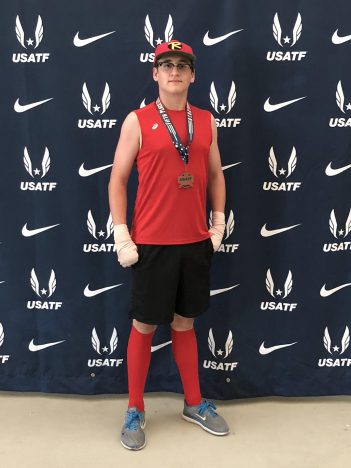 Nealon Jones with his fifth-place medal in the hammer from the USA Track and Field National Youth Championships. (Submitted photo)

Jones finished fifth in the hammer throw in the boys 15-16 division with a throw of 118 feet at the June 26 to July 1 USA Track and Field National Youth Outdoor Championships in Brockport, N.Y. He placed sixth in javelin, ninth in shot put and 13th in the discus throw.

“I experimented with the hammer with my (personal) coach Tyler Miller and it attracted me because it was something new to try,” Jones said. “It clicked with me. I understood the form a lot better than a lot of other implements. We just tried javelin almost a year ago, so I could say I could do all four. That just worked. I understand the javelin well now.”

Jones followed up that success at Brockport by qualifying for the USATF Hershey National Junior Olympic Track and Field Championships by placing third in the boys 15-16 division in the regional competition at Muncie July 7. He will compete in the national meet at Greensboro, N.C., July 23. It’s the second time he qualified for the hammer in the Junior Olympic meet. He placed 23rd in 2017 after only doing the hammer for four months.

“I just like hammer more because it gives you a lot more speed and a lot more power,” he said. “A lot of throwing is trying to get force so you throw the implement farther in the field.”

“I’m a volunteer shot put and discus coach for the kids,” Jones said. “I teach hammer to anyone who is over 15 years old.”

Jones does power-lifting at the gym, Force Barbell.

Fishers Fire team member Jacoby Woolver, 8, finished first in the long jump and 1,500 meters and second in the 800 in the boys 8-and-under division of USA Track and Field National Youth Outdoor Championships at Brockport.