You are at:Home»Current in Carmel»Carmel Community»Awards continue to add up for Carmel High School math duo

Two Carmel High School students credit early exposure to math for their success in elite math competitions. Joey Heerens and Kevin Liu, who will be seniors this fall, said they naturally gravitated toward the subject and were encouraged by teachers along the way. 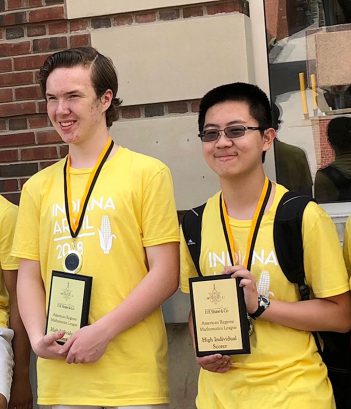 “I grew up doing advanced math and was introduced to math competitions during my last years of elementary school,” Liu said. “For the first time I was surrounded by people who were just as interested in math as I was, and I quickly found a home in the math competition community.”

Heerens, who spent a lot of time as a youngster reading math books, said the subject intrigues him because it is able to “provide answers to some of the most complicated problems.”

“The fact we can take this language of words and characters to provide answers to complex problems just amazes me and keeps me trying to find multiple ways on how to answer these,” he said. “So, I guess when I was younger it was about the challenge, but over time it evolved into a deep appreciation for what we as a society can achieve with math.”

The two teens have enjoyed much uccess in competitions. As sixth-graders, they were ranked in the top four in Indiana for the MATHCOUNTS event for middle schoolers. In 2015, Liu was ranked first in Indiana and Heerens was fourth. Their team went on to win the national MATHCOUNTS title with Liu finishing first overall in the U.S. while Heerens finished 14th out of the 224 participants.

“I was happy to win the competition, but what I enjoyed the most was the social experience,” Liu said. “I made many friends there and we keep in touch even today.”

That success has continued at Carmel High. Earlier this year, Liu finished fourth overall and Heerens seventh in the Harvard-MIT Mathematics Tournament in the Algebra and Number Theory category. In early June, the duo competed in the annual national competition for the American Regions Mathematics League, where Liu once again finished fourth and Heerens placed 12th.

“To me, it’s not about competing against other, it’s about striving for excellence, to improving myself and my abilities,” Heerens said. “Being consistent tells me I have been able to complete my goals, and I continue to try to push myself further.”

Neither student has applied to college yet but both plan to make math a significant part of their undergraduate studies.