You are at:Home»Current in Noblesville»Noblesville Community»West Middle School, district to return to school tomorrow 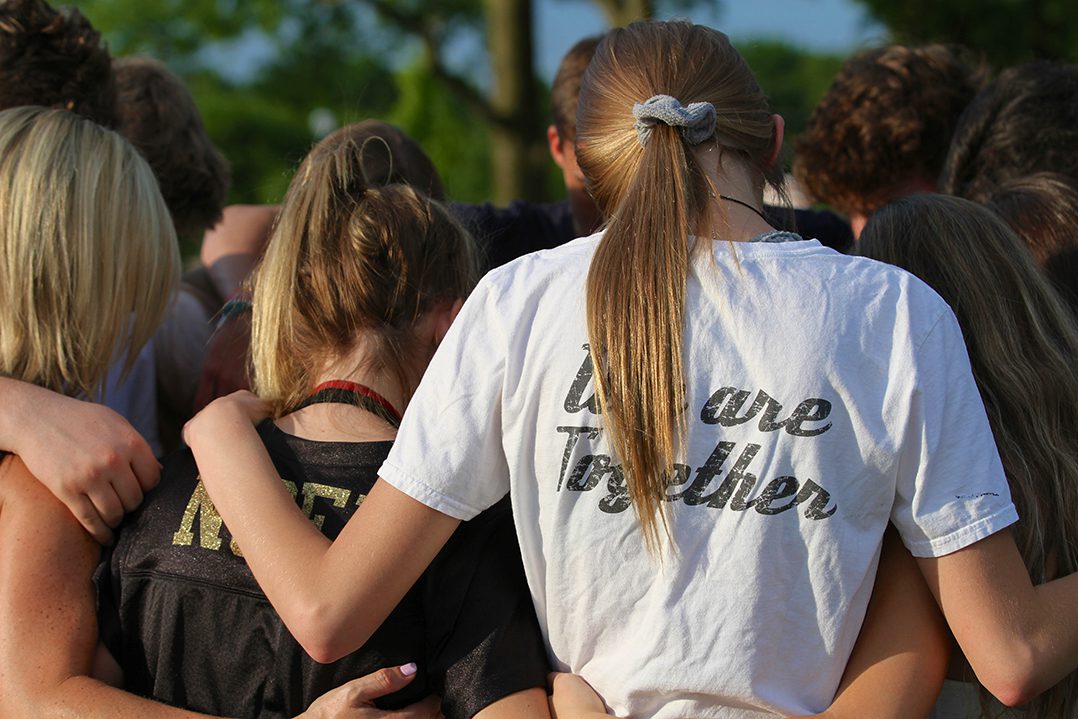 Students support each other at a prayer vigil May 26 at Federal Hill Commons. (Photo by Sadie Hunter)

“Jason Seaman, Ella Whistler and other staff, parents and students have told us they are anxious to return to ‘normal’ as they start this school year,” stated Marnie Cooke, Noblesville Schools director of marketing and communications. 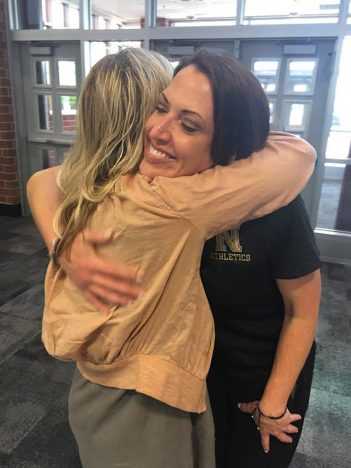 NWMS Principal Stacey Swan hugs a parent May 30 after NWMS students returned to school after the May 25 shooting. (File photo)

Cooke told Current that NWMS students and staff can expect to see extra counselors and therapy dogs at the school this week as students get back into their school routine. The district also has announced it will have a stronger police presence as students return. 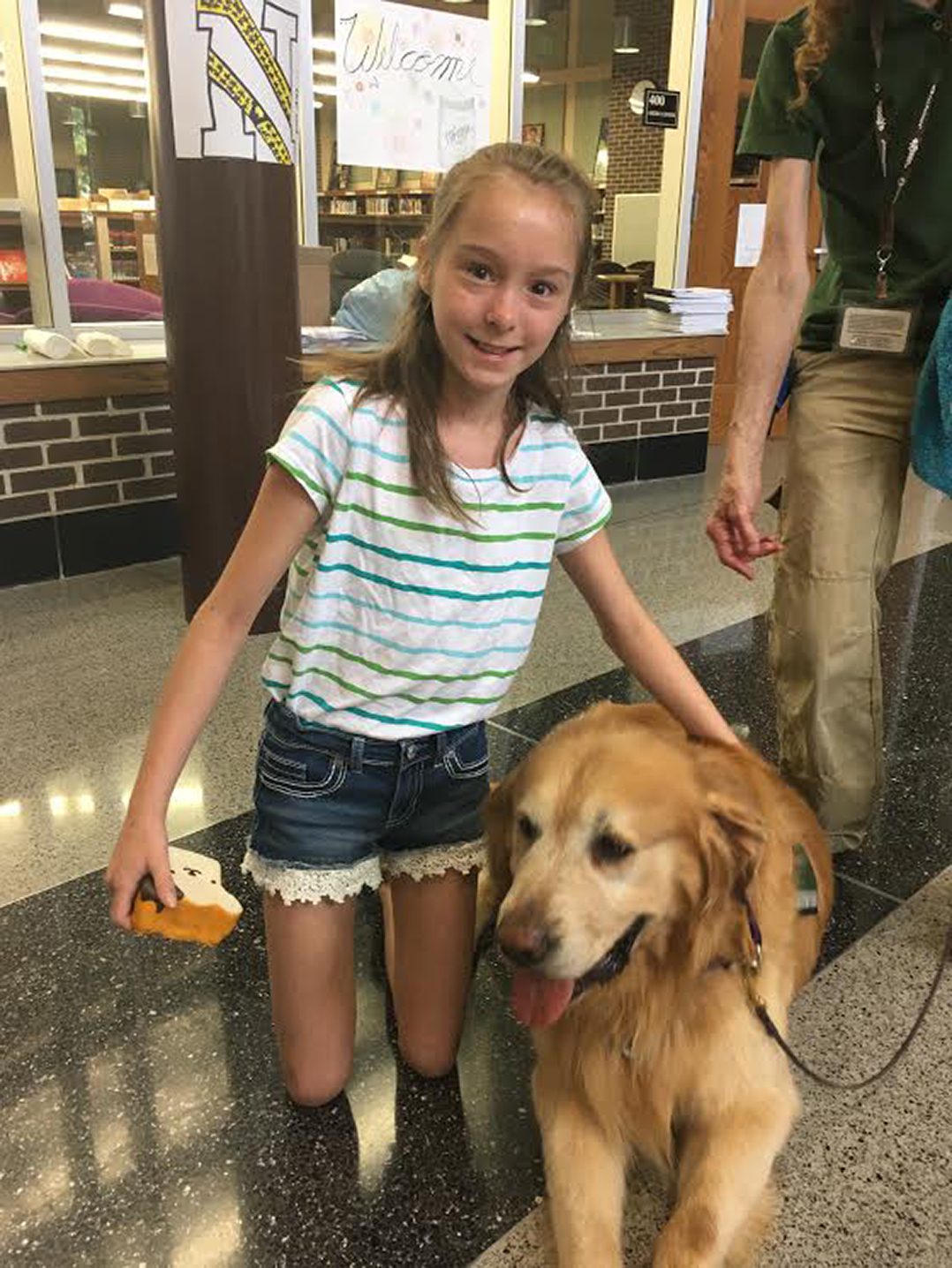 Therapy dogs have been used for students and staff since May 25 The district said additional dogs will be on site Aug. 1 when NWMS students return from summer break. (File photo)

Within hours of the shooting May 25, staff at Noblesville Schools began working to offer a variety of counseling services to students, parents and staff and has been working through the summer to continue those services, as well as study and implement changes in an effort to make each of its 10 schools safer. 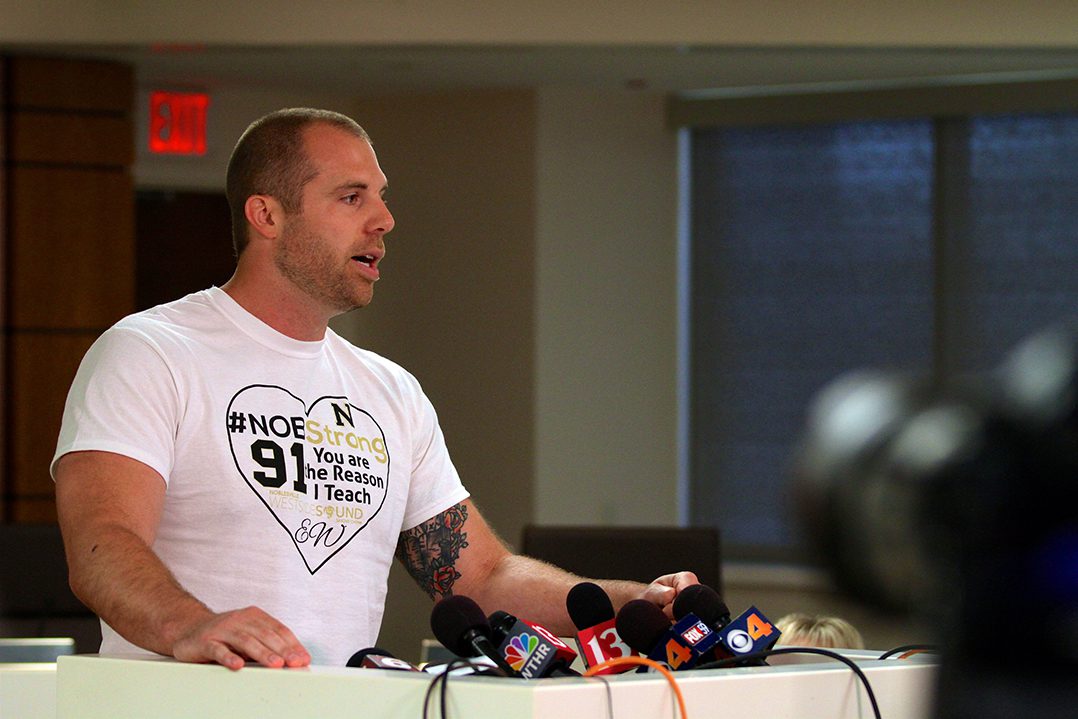 Jason Seaman speaks at a press conference May 28. (Photo by Sadie Hunter)

A proposed referendum, which will be on the Nov. 6 ballot, could provide additional funding to the district for both teacher compensation and safety enhancements, which would include hiring additional at-risk coordinators, putting one in each school, as well as giving more money to tangible changes like extra cameras, lockdown tools and more.

The proposed referendum will replace the district’s current referendum of 18.9 cents per $100 of a home’s assessed value to 37 cents.

To see more details from Current on the referendum, visit youarecurrent.com/2018/07/18/referendum-for-safety-staff-moves-forward-to-november-election/. 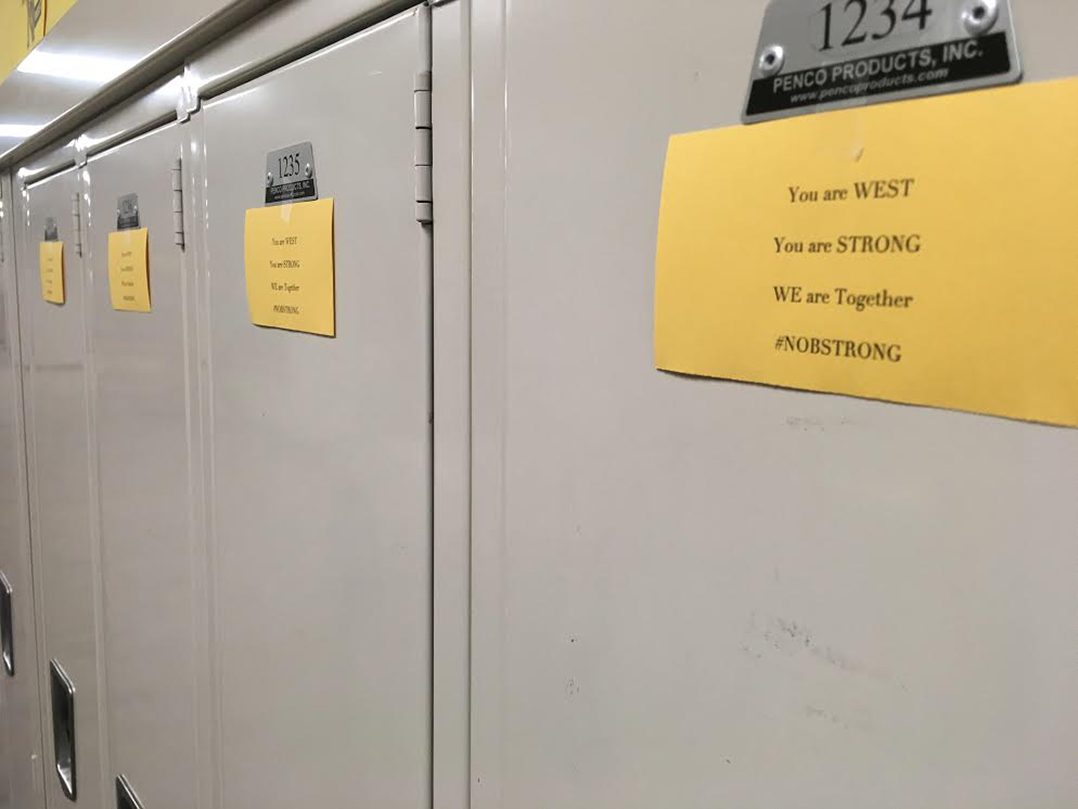 Positive notes and words of encouragement are posted to students lockers at NWMS. (File photo)

When people return to the schools on Aug. 1, staff, parents and students alike will see immediate changes in addition to counseling and support, like how people can enter a school to the complete elimination of portable classrooms. The district also has applied for metal detector wands from the state, but those aren’t set to arrive until mid-August.

At July 28’s Back to School Bash, an annual community celebration held by Noblesville Schools each year, Federal Hill Commons was visited by more than 8,000 attending, a record for the event.

At the bash, various showcases were held for the community, as well as a variety of art displays supporting Noblesville West Middle School and the district.

Earlier in the month, a partnership between the City of Noblesville and parents of Noblesville Schools parents led to MillerFest at Federal Hill Commons. The event featured live music, food trucks, auctions and raffles and more and served as a fundraiser for Jason Seaman and Ella Whistler. 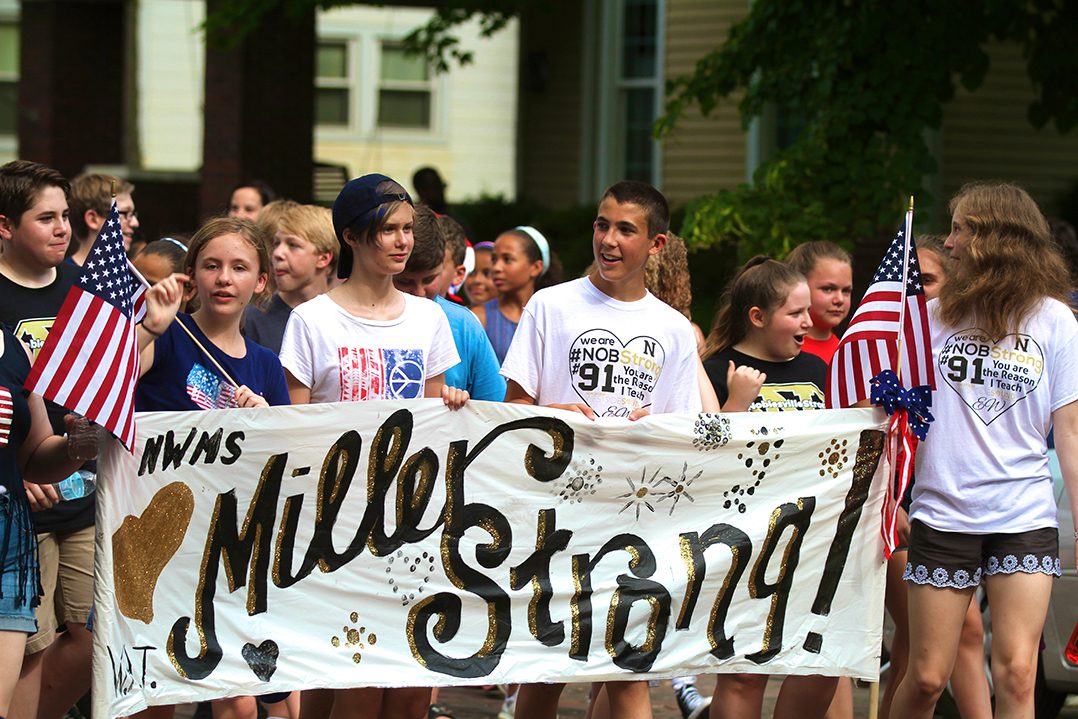 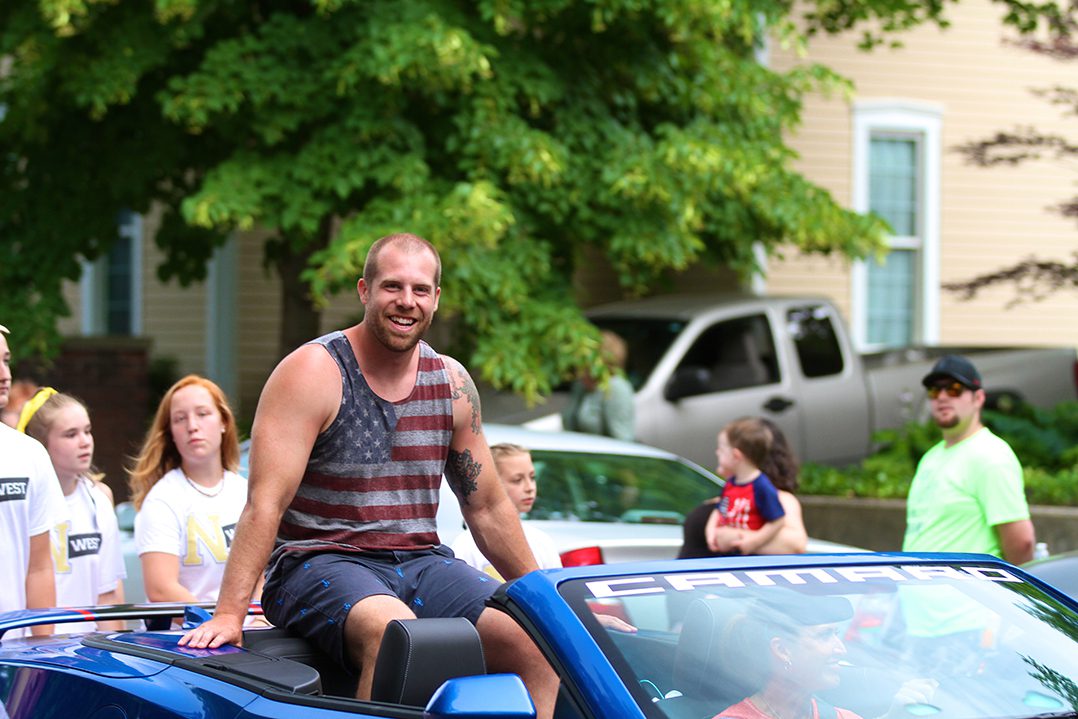 Jason Seaman rides at the front of the Noblesville July 4 parade as grand marshal. (Photo by Sadie Hunter)

On June 30, the City of Noblesville announced that the grand marshals for its annual July 4 parade would be Ella Whistler and Jason Seaman. Also during the parade, a large group of NWMS students finished the parade by leading tail with a “Miller Strong” banner. 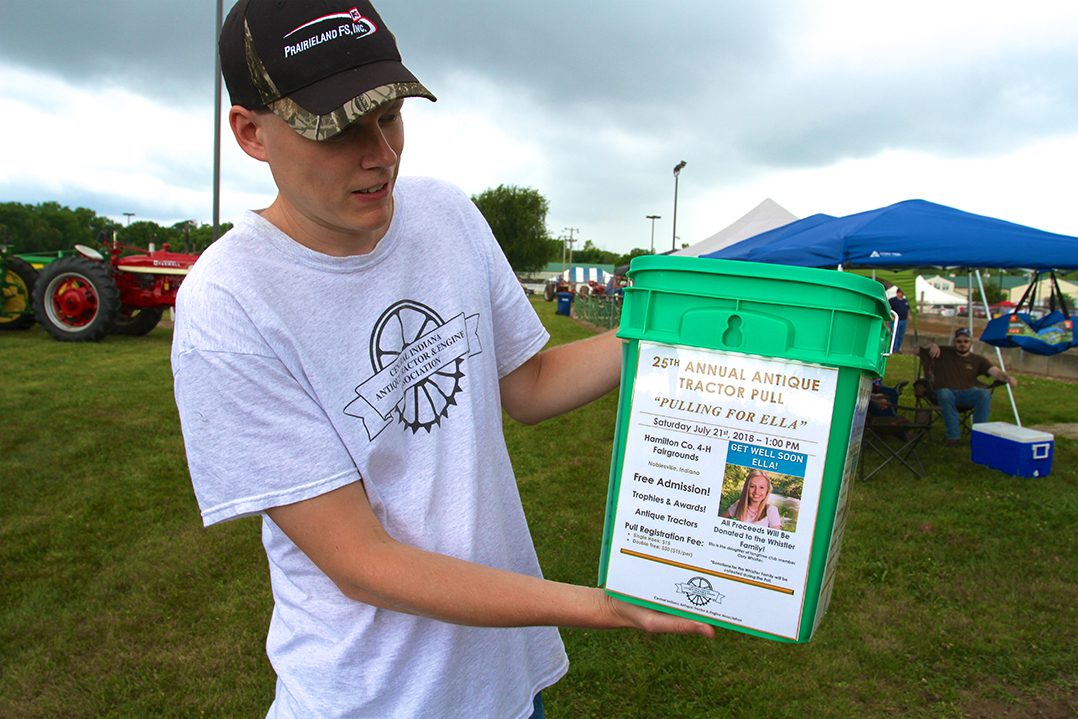 From lemonade stands to tractor pulls to 5Ks, the two summer months between the last day of school on June 1 and the first day of school on Aug. 1 were filled with dozens of efforts by community members to make a difference, all starting with the GoFundMe pages for both Whistler and Seaman, which have collectively raised more than $242,000 from nearly 5,000 people.