Many visitors to Anthony’s Chophouse will feel a touch of nostalgia. 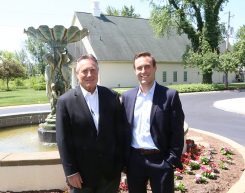 The building, 201 W. Main St., is owned by Chuck Lazzara, co-owner of Ritz Charles. The restaurant is owned by his son, Tony Lazzara, and wife, Kayla.

“We had this vision probably six years ago to say wouldn’t it be nice if it had a little Carmel history in the restaurant,” Lazzara said. “Then we heard Bru Burger was going to tear down Glass Chimney. We thought wouldn’t it be great to incorporate this bar into our restaurant downtown.”

Lazzara and his son met with the owner, Mike Cunningham, in 2014 to ask if they could buy the mahogany bar. Cunningham agreed because he didn’t have plans to use it.

“We thought we should try to save the bar for Carmel history,” Tony said. “It was more about Dad going there and knowing about the bar and service. I think I had only gone in there once. I knew it was a cool bar everyone remembered, but I didn’t have a vision of it yet until I saw it. It’s beautiful and is tied into the design of the entire building.”

So, they had the bar taken apart by a master carpenter to move it. Tony estimated it was around 100 pieces. The parts were stored in relatives’ homes before it was put back together at the restaurant. The master carpenter oversaw the assembly.

“We did a light refinishing,” Lazzara said. “We didn’t want to change the character of it. We did a little of steel wool. It’s all the original stuff. We wanted to go with an old Chicago look, so we put this marble floor in. We designed the space to fit this.”

In 1998, Glass Chimney owner Dieter Puska, with a builder friend James Taylor of Custom Homes of Carmel, decided to establish the Glass Chimney Bar room. The mahogany bar was built the same year, and it became one of the hottest spots in Carmel. People entering the Glass Chimney would be greeted the tuxedo-dressed Gabriel Piron.

“You’d go to the bar and hear what the $13 special for the night was,” said Lazzara, a frequent visitor. “It was packed to the gills. My wife (Lynn) and I went there often, and we saw a lot of people from Carmel.”

Lazzara said Puska has offered to display his cognac collection at the bar.

“A lot of people we’ve shown this to have said they can’t wait to come back,” he said. “At first we thought we have it up here and have a bartender up here in case a few people want to drink. But everyone who has come in said they want to come up here, so that’s why we sectioned it off in its own space.”

Lazzara moved to Carmel in 1975, working as a real estate agent before opening Ritz Charles in 1985.

A 2008 Carmel High School graduate, Tony made the feasibility of a downtown Carmel steakhouse his DECA project as a senior. Anthony, who played golf at Ball State, graduated from Ball State’s entrepreneurship program in 2013, using the steakhouse as his thesis.