You are at:Home»Current in Zionsville»Zionsville Cover Stories»Blowing smoke: Innocent-looking devices may be used for vaping

One looks like a highlighter. Another like an ipod. They can be in the shape of lighters, a pack of gum or bracelets.

The devices are used for vaping, a method of inhaling vapor and nicotine, and it is happening in Zionsville Community Schools. The vaping industry began in 2004 with the introduction of modern e-cigarettes and is expected to a $23 billion industry by 2023.

Vaping and e-cigarette devices have become the No. 1 tobacco products used by teens in the United States, according to the Center for Disease Control. In 2017, 11.7 percent of high school students and 3.3 percent of middle school students reported using electronic cigarettes in the past 30 days.

Vape flavors like watermelon punch, sour worms and cotton candy make them even more appealing to youth. Devices with names like JUUL have become one of the more popular products, which have the look of a flash drive and the ability to recharge through a computer’s USB port.

“A lot of schools are having problems with it because kids are using it in class or using it in the bathroom,” said Haughton, noting that students may exhale into their arm or under a shirt.

E-cigarettes and vaping materials are unregulated by the FDA. Even those without nicotine can still contain harmful chemicals.

Vaping is a relatively new concern in ZCS. During the 2016-17 school year, there were 10 suspensions involving vaping or possessing materials. Last year, that number doubled.

ZCS Supt. Scott Robison said vaping is much easier to hide than cigarette smoking and speculated that it’s likely happening without detection.

“With a ‘hit’ from a vaping pen, Juul device, etc., taking less than a couple of seconds, it is extremely easy to conceal,” Robison said via email.

The fruity smell emitted from the devices can often be mistaken for gum or candy.

“The old version of the problem was smoking,” Robison said. “Vaping is just the new incarnation of the deadly habit of ingesting something into one’s lungs.”

School officials worry that the prevalence of discrete products like JUUL may entice more students to engage in the behavior.

E-cigarettes were the most popular form of tobacco use by Indiana youth in 2016, according to the CDC, but the current use is lower than the national average, with 2.8 percent of middle schoolers and 10.5 percent of high schoolers reporting e-cigarette use within the past 30 days. However, the percentage of Indiana adults who use e-cigarettes is higher than the national average, according to the CDC.

Being able to purchase materials online without proof of age has allowed youth to obtain devices, and many acquire e-cigarettes in their own homes.

“We have become aware of cases in which parents have supplied vaping devices and smoking substances to their children,” Robison said.

Haughton said some students have reportedly charged classmates a fee for a few puffs on  vaping devices. 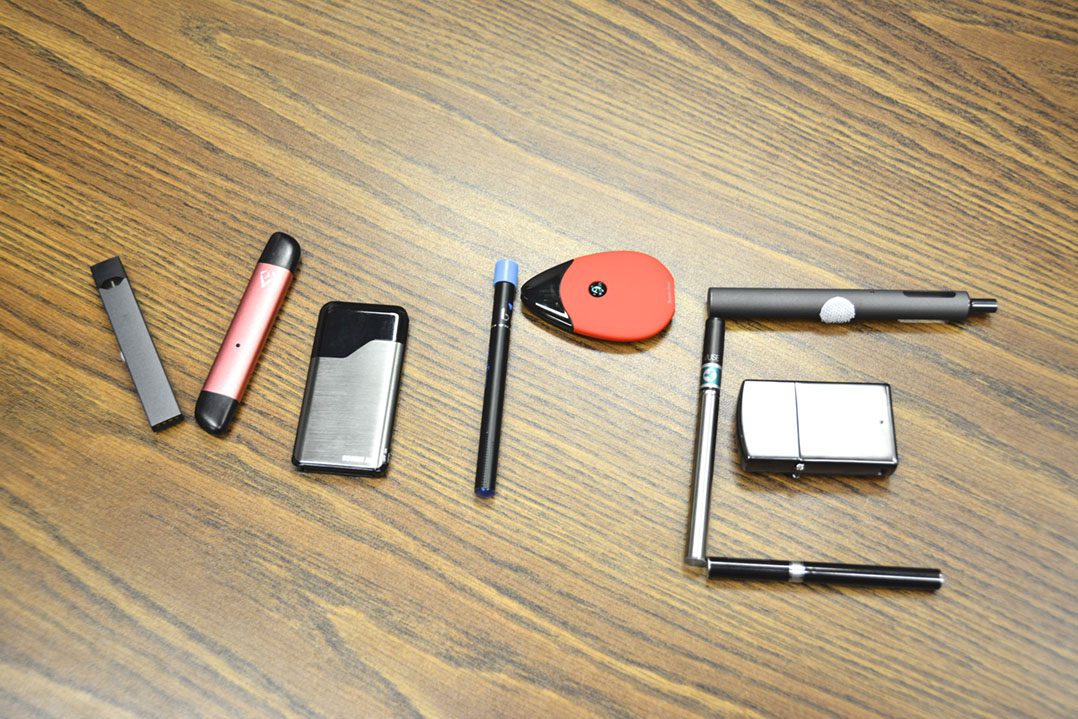 All of the devices pictured can be used for vaping. (Photo by Lisa Price)

Although some vape juices are labeled nicotine-free, Haughton said many do contain the substance.

“We’ve seen that people who are exposed to nicotine are more likely to get addicted to different substances later in life,” Haughton said.  “It’s really hard to study the lifetime effects that (vaping) can have on a person when they really haven’t been around for a lifetime.”

E-cigarettes and vaping materials are unregulated by the FDA, compounding the problem. In 2016, the FDA announced that vaping products would come under the same scrutiny as cigarettes, but the deadline to request approval has been extended until 2022.

Because the devices are small and leave little evidence, sometimes parents may not realize they are being used. Unexplained scents, gadgets that look strange or don’t work, sensitivity to caffeine, increased thirst and nose bleeds can be indicators of vaping.

“Families/parents that haven’t used tobacco products (are) probably the most naive,” said Cindy Murphy, division administrator for the Boone County Health Dept. “That’s not their world.”

It’s important for families to have an open, non-judgmental conversation about vaping with their children, according to Haughton.

“This isn’t something that they should ignore,” she said.

Sharing the health risks through conversations or text is a way the CDC also suggests connecting with teens.

“There’s so much that we don’t know about them. It’s important to outline the health consequences,” Haughton said. “It wasn’t too long ago that people thought that cigarettes were healthy.”

Electrical vaping devices consist of a mouthpiece, cartridge or refillable tank and a battery to heat it, which produces aerosol.

“Just like an aerosol would be released from spray paint,” said Claire Haughton, public health educator for the Boone County Health Dept. “A really common misconception is that they just release water vapor,”

Haughton noted that even aerosols without nicotine can still release dangerous chemicals, such as formaldehyde.

The cartridge or tank of e-juice, sometimes known as vaping juice, is filled with the flavored substance, plus chemicals like propylene glycol or glycerin, and often nicotine. Cartridges can have the look and appearance of a pack of gum, resulting in lawsuits and warnings from the FDA regarding similarities in packaging.

“We are seeing increased calls to poison control hotlines because little kids are (ingesting) these,” Haughton said. “It looks like candy, it smells like candy.”

Vaping initially became popular as an alternative to cigarettes. Murphy said she doesn’t discourage the use of vaping devices by adults who want to stop smoking, but notes it’s only a step in the right direction to completely break nicotine addiction.

For those looking for resources to stop tobacco use, a free hotline, 1-800-QUIT-NOW, provides individualized advice based on age and situation. Websites like QuitNow.net and TruthInitiative.org can also provide guidance and support.