You are at:Home»Current in Carmel»Carmel Community»Young Carmel runner has quick learning curve in qualifying for National Junior Olympics

However, the 8-year-old Carmel resident has shown quite an aptitude for sprinting. Despite not competing in meets until earlier this summer, Grilliot finished third in the 100 and 200 meters at the USA Track and Junior Olympics Regional 7 Championships for 8-and-under girls division at Ball State to qualify for the Hershey National Junior Olympics at Greensboro, N.C. 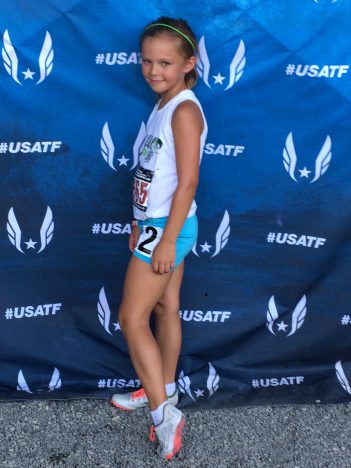 The Mohawk Trails Elementary School third-grader competed in the 100 and 200 meters July 23 to 29 in Greensboro, N.C.

“It was fun seeing how good everyone was around the country,” said Grilliot, adding she met a lot of friendly kids.

Grilliot was 52nd out of 60 participants in the 100 meters and 49th out of 58 in the 200. When asked if this made her eager to return to nationals, she said “absolutely.”

Cianna Cunningham, from the Fishers Fire team, placed 47th in the 100 and 51st in the 200 at the national meet.

Ferreri’s daughter, Gianna, a Westfield Intermediate School fifth-grader, was the only other Westfield team member to qualify for the National Junior Olympics meet.

Gianna said the best part of the experience “was meeting and talking to other kids (athletes) from all across the country. Also, hanging out with my dad.”

Gianna, who competes primarily in the 800 meters, 1,500 meters and the long jump, has been competing since age 6 in track and cross country. She also qualified in 2017 for the Junior Olympics meet at the University of Kansas in the 800 meters in the same 9-10 age group. She finished 38th this year.

“I learned there are some super-fast girls out there,” Gianna said of the national meet.

Eli Lesnet, a Westfield resident and member of Noblesville’s Body in Training team, finished third in the javelin throw for 8-and-under boys.