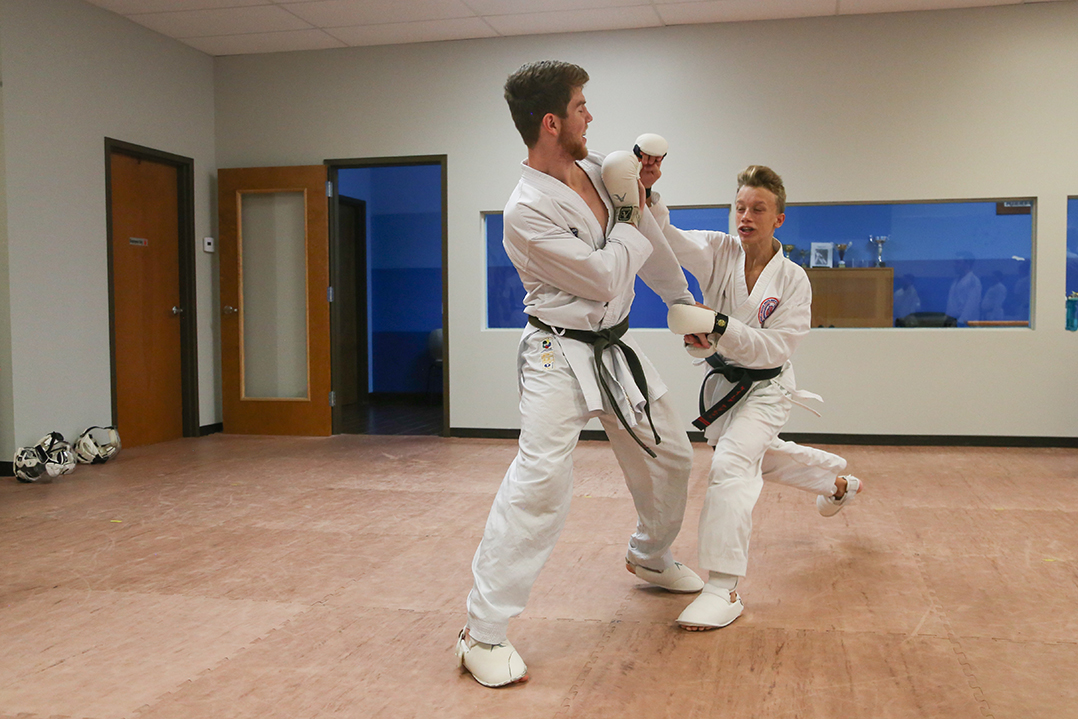 He watched dozens of classes at his parents’ dojo before he could even talk. His first communicative sound was a kiai, the shout used in karate when making an attacking move.

So, it made sense that the first word out of his mouth after a June 2017 skimboarding accident was, “nationals,” a single cry representing a dream that seemed as fractured as his throbbing right leg at the time.

The Carmel resident attended the karate national championship weeks later – on crutches – to cheer on his teammates. He was eager to get back on the mat, unaware that he was only at the beginning of a long and winding road to recovery.

And he was not alone.

Caleb, now 14, had his first surgery on Georgia’s St. Simons Island shortly after the accident and two more when he returned home. But at nationals, he knew something was seriously wrong when his stitches pulled apart and revealed the screw that had been placed in his bone. 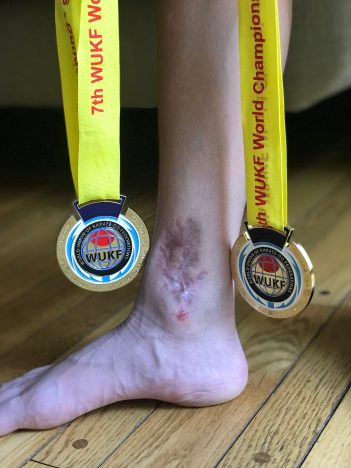 Surgeons performed a skin graft for Caleb’s fourth surgery, and when a small area of skin wouldn’t heal they put him under the knife for a fifth time in January to determine what was wrong. They discovered an infection in his bone, which finally cleared up after six weeks of antibiotics.

Through it all, Caleb felt a peace and confidence that he’d fully recover.

“I definitely knew I was going to be OK, but there were moments where I was really fighting,” he said.

The journey wasn’t so easy for his mom.

“It was the hardest thing that I’ve ever gone through in my life, to see my son and not know why (his leg) isn’t healing,” said Heather Adamson, Caleb’s mother and a sensei at Adamson’s Karate. “There were moments we thought he may lose his leg.”

With months of rehab still looming, it looked like Caleb would yet again miss out on competing at the national and world competitions in 2018. And it appeared one of the other top students at Adamson’s Karate would miss out as well.

Gabe Ruiz, who just started his junior year at Hamilton Southeastern High School, broke his nose and multiple bones in his face while attempting a double front flip on a trampoline on the last day of 2017.

“It freaked me out, because I knew I was going to be out (of karate),” Gabe said. “At first I tried to get up and walk it off, but then I walked past the mirrors on my way to the bathroom and realized I’m not walking that one off.”

Gabe, now 16, had to have his jaw wired shut for two months, crushing the high hopes he had for the big upcoming competitions.

But when the students were cleared to compete again — Caleb in mid-January and Gabe in March — they were surprised to not only shake the rust off quickly but win events. Caleb said he returned faster and stronger than before. Gabe said he knew he was back in form after getting hit and suffering a bloody nose in his first competition back and not feeling any trepidation.

Both boys qualified for the World Union of Karate-Do Federations competition in June in Dundee, Scotland, and became laser-focused on training in the few months they had to prepare for their trip overseas. 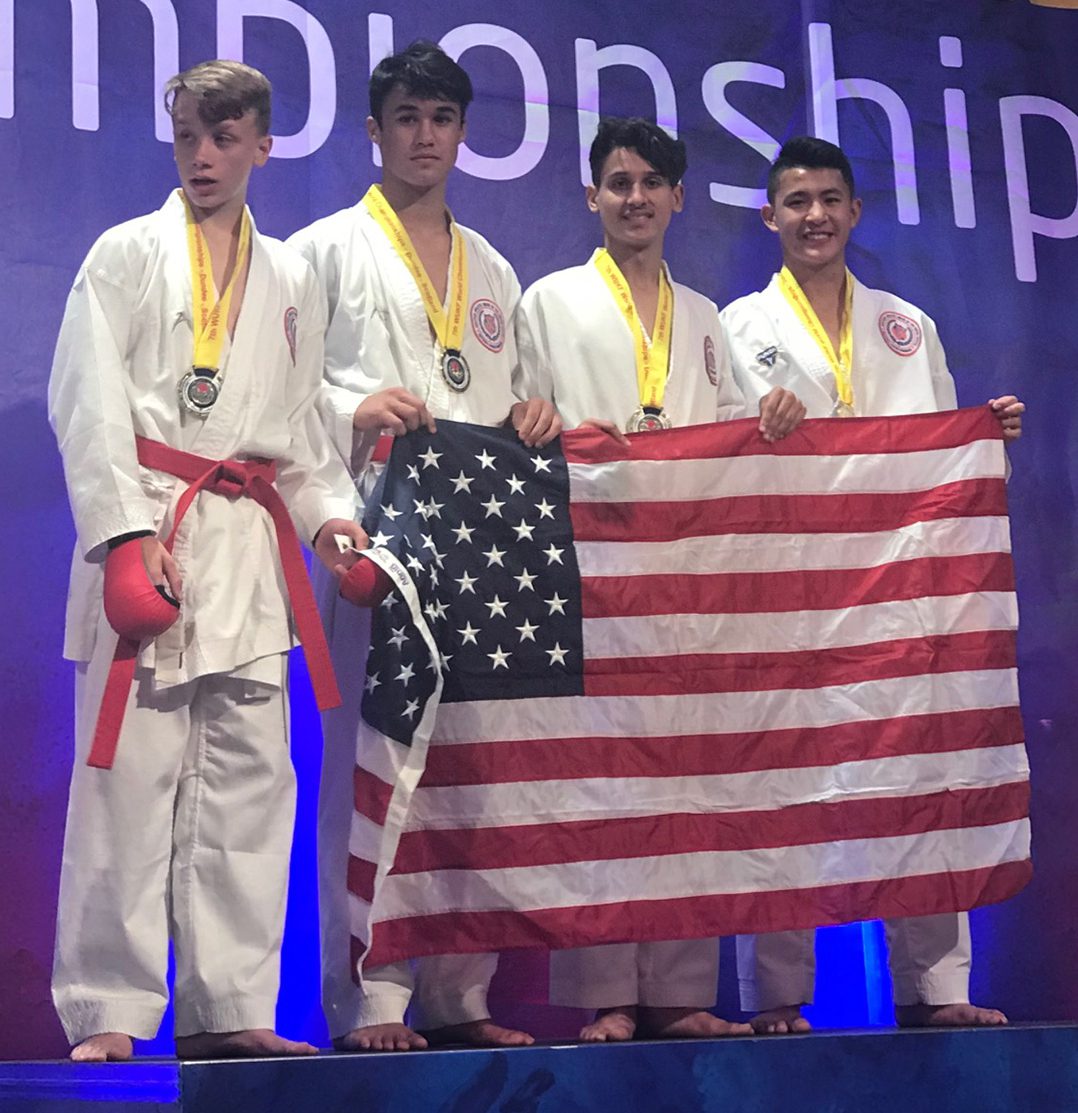 Caleb and Gabe were thrilled to reach their seemingly unattainable goal of competing at worlds, but for their parents it was a bit nerve wracking.

“I was terrified when we finally went to Scotland, because I was scared to death he was going to have put in all that work (to get back) and not perform in a way that validated his effort,” said Jim Ruiz, Gabe’s father.

But those fears were unfounded. Both boys finished on the medals stand, Caleb winning his first international golds in individual kata and team kumite for his age group, and Gabe winning individual silvers in kata and kumite after a dramatic comeback in one of his fights.

“You’d pay great money to have your son’s confidence built in the way that our son’s was, and we had no idea or guarantee of the outcome,” said Heather, who was able to coach Caleb in one of the events. “To see that happen was a beautiful moment. I cried.”

“(Gold) isn’t even what I was shooting for,” he said. “I was just shooting for gold at nationals, and this was worlds, so it was very surprising.”

Now, months removed from the many surgeries, it’s hard to see the trauma that shaped Caleb and Gabe by looking at them. But they’ve both matured through the process and learned some lessons along the way.

“Don’t give up,” Caleb said. “Sometimes you won’t even expect that your goals would be that big. Sometimes you get to your goal and realize it’s way bigger than you thought it was. It’s really surprising when you get there and it’s a lot better than you imagined.”

For Gabe, the lesson was more practical.

“You can come back from anything,” he said. “And don’t do anything really stupid right before you go to the world championships.”

As Caleb Adamson and Gabe Ruiz prepared for the karate world championship, they found inspiration and encouragement from the third member of their team.

Like Caleb, Luke Sartino, 22, has been a student at Adamson’s Karate since he was barely more than a toddler. He’s known Caleb his entire life and has watched him grow from a kid who hung around the dojo into one of his sparring partners.

When Sartino was a freshman at Brebeuf Jesuit Preparatory School, he injured his knee playing soccer and spent the next two years suffering multiple setbacks and four surgeries on his long, frustrating road to recovery.

Now, the Carmel native is an Olympic hopeful, and his story gave Gabe and Caleb hope as they rehabbed.

“I tried to convey to them that I went through a very similar thing,” Sartino said. “They took that to heart.”

Sartino said it hurt to watch his friends and training partners struggle with being sidelined, but he encouraged them to not rush back to the mat before their bodies were ready. He was thrilled to see them succeed at worlds.

“It was awesome. They totally deserved it,” Sartino said. “I’m lucky I get to train with them several days a week. It’s been fun for me. I feel like I’m helping the new generation while they’re helping me accomplish my goals.”