Thompson was arrested on the suspicious of operating a vehicle while intoxicated following a three-car crash in Indianapolis.

Gebhart began his law enforcement career in 1994 in Colorado and has served with FPD since 2000. He was appointed patrol commander in 2011 and to assistant chief in 2016. 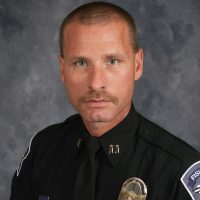 In his new role, Gebhart is assembling a command staff with a focus on revitalizing the department’s vision. The department will move into a new headquarters in a few weeks.

“Once I get a team in place, we will continue and build upon great things to set the tone (for the department) in moving forward with a good vision plan,” Gebhart said.

One of Gebhart’s plans is to utilize all of the department’s resources to serve the community. At the moment, the FPD’s Internet Crimes against Children force and other units work in a separate building. But all units within the department will work in the new headquarters when it opens Sept. 10.

“One thing we have definitely been working on is using all of our resources we have to serve the community, using everything we have,” Gebhart said. “This (new) department encompasses that theory. Individual missions and goals create silos, and I want to break away from any silos. I want to bring all resources together on anything the city might need us to respond to.”

Gebhart appointed Capt. Luke Gannon as assistant chief. Gannon previously was a captain within the investigations unit and has served with FPD since 1999. A search is under way to fill Gannon’s previous position.

“Right now, morale is improving as our guys get back to what they know best and move away from distractions created outside of the agency,” Gebhart said.