You are at:Home»Lifestyle»Health»Nonprofit encourages sheet donations in September during Childhood Cancer Awareness Month

September is Childhood Cancer Awareness Month, and a Carmel family is encouraging community members to do their part to make hospital stays a little more comfortable for kids who spend a lot of time there. 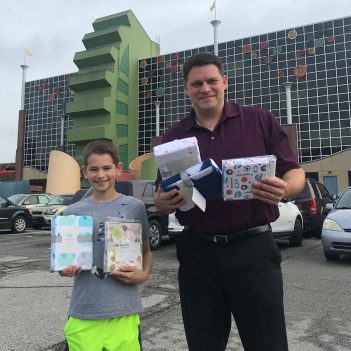 Tamir Halevi displays sheets to be donated to a hospital through Sheets from Home. (Submitted photo)

The “I give a sheet. What about you?” campaign aims to collect as many new sheets as possible to donate to children’s hospitals at the end of September. The campaign is organized by Carmel resident Ya-el Halevi, co-founder of the nonprofit Sheets from Home.

“September brings in the new school year, and with that lots of excitement for the little ones. Sadly, not all kids can share that feeling. Some have to face a different, tougher reality because they’re fighting cancer,” Halevi said. “The reality is they’re spending a lot of time in hospitals away from the comforts of their home. Sheets From Home launched the ‘I give a sheet. What about you?’ campaign geared toward Childhood Cancer Awareness Month. The plan is to bring that home-like feeling to as many kids as possible all over the world.”

It’s a battle Halevi knows all too well. She fought melanoma and cervical cancer between 2006 and 2010. Then, in early 2010, her son, Tamir, was diagnosed with neuroblastoma and spent the next 18 months fighting the disease.

“Our son would spend many, many nights confined to his hospital bed. We brought lots of love, we brought courage and hope, and we even brought in toys. We also brought sheets from home, and this did unexpected and amazing things,” Halevi said. “On the first night of his chemo at the hospital, we ripped off the white patient hospital sheets and replaced them with sheets from home. We thought this was just a small gesture, but over the course of treatments, a nurse, another kid or a mom would stand outside our hospital room and marvel at how the sheets brought life to the room. We were amazed at the positive impact and the smiles.”

Although it didn’t make the pain go away, her son’s hospital bed felt more like his real home.

To participate in the campaign, Halevi recommends organizing an event to collect sheets with donors creating personal notes of encouragement to be sent with the sheets. Groups can schedule a drop off with a local hospital.

“We’ve been donating sheets since 2011 and received the official nonprofit charity status in 2015. Since then, we were able to bring smiles to kids from Maine all the way to Florida to the Midwest to Texas and California,” Halevi said. “Some (staff) make it into a big party and let the kids choose from the pile. Others surprise the little ones after a rough procedure with colorful sheets already on their bed.”