You are at:Home»Current in Carmel»Carmel Cover Stories»A healthy harvest: As Gleaning Garden grows, so does its ability to help food insecure

Travel along the Monon Trail in Carmel, and it’s easy to see that the city is booming.

But nestled between the luxurious Carmel City Center and ever-expanding Midtown area is a small community garden that got its start as a way to help neighbors in need.

The Gleaning Garden grows just south of Union Brewing Company on a small plot of land along the Monon Trail that’s easy to miss. It’s here that six years ago Carmel’s Andrew Fritz began growing fresh food after a doctor asked about his diet following a serious bicycle accident.

“I felt really ashamed because my diet was terrible, which involved no vegetables or fruits. I didn’t really eat an actual banana until I was probably 30 years old,” Fritz said.

So, Fritz set a goal to eat a different fruit or vegetable each week from A through Z, and he began making smoothies and preparing produce in ways that he found palatable. His diet and health began to change, but it wasn’t always easy.

“I took a pay cut and I wasn’t making as much money,” he said. “The thought came to mind: If I can’t eat good, healthy produce, then surely other people are having the same issue, and everything kind of converged into starting a community garden,” he said.

Thus, the Gleaning Garden was born.

Carmel’s Leum family are no strangers to the Gleaning Garden, stumbling upon it during a trip from the Carmel Farmers Market a few months ago. They have been involved ever since.

Sheri Leum and her husband, Brandon, had cooked with fresh produce while their kids were growing up and were delighted to find the Gleaning Garden.

“We just moved to Carmel a year ago, and we never thought we’d ever have the opportunity to have a garden in Carmel,” Brandon Leum said.

For Fritz, who wanted a place to integrate himself into the Carmel community, the garden quickly became a place to meet and connect with people.

The Leums said the community aspect of the garden is their favorite thing about it because they have met many people from Carmel and learned a lot from the exposure to diversity.

“(The garden) is a learning tool for a lot of people who walk through, for the community,” Sheri Leum said. “We’ve been connected with people who are from India, and we’ve learned from them. We’re coming together as a community and learning.” 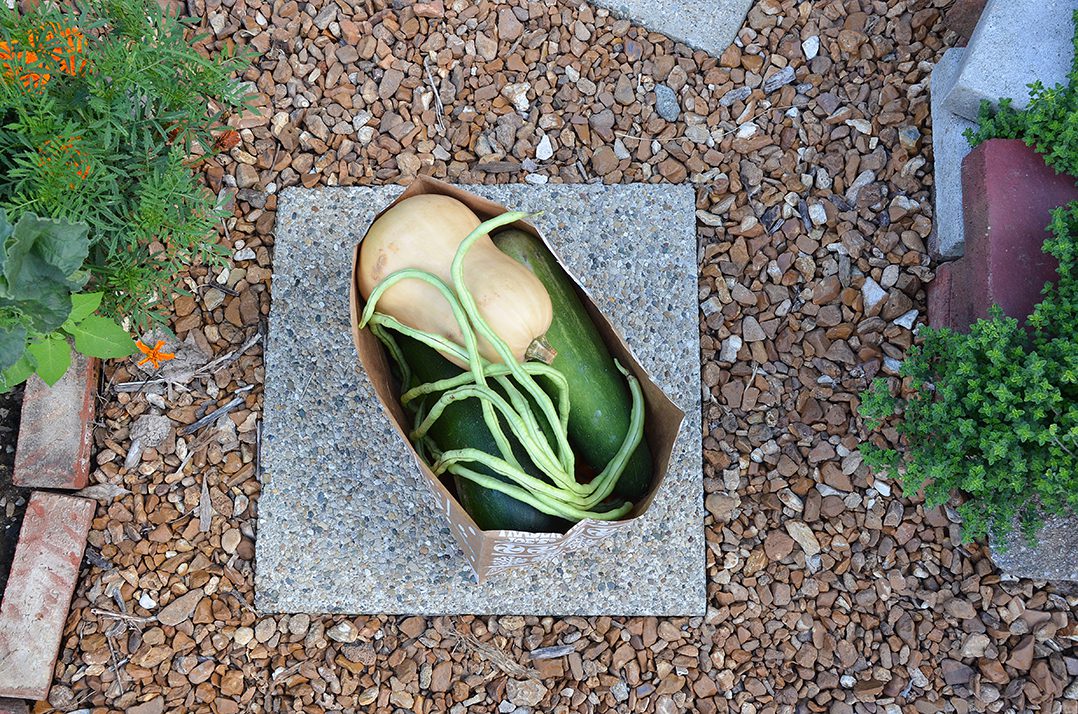 Anyone from the community is welcome to take a day’s worth of produce from the Gleaning Garden, but its mission is to provide healthy produce for the food insecure. (Photo by Sara Baldwin Schatz)

The Gleaning Garden’s produce is available to all, and whatever isn’t taken is delivered to Carmel United Methodist Church’s food pantry.

That was one of the reasons Austin Leum decided to get involved.

“Amila, my girlfriend and I, had never done any kind of gardening in my life. When the opportunity entered when my parents got there to have a little plot to ourselves, we wanted to try to do something new,” Austin Leum said. “We found out that the excess vegetables go to food pantries. We’re helping others and helping ourselves.”

Volunteers from all around Carmel nurture and tend to the Gleaning Garden, keeping it beautiful for all residents to enjoy. A picnic table rests in the center of the garden, and there are chairs in the wooded area behind it.

“This is a spot where people can come and sit without having to pay for anything,” Fritz said. “They can simply sit and receive.”

Fritz encourages residents to visit the garden if they need a quiet place or simply want to be closer to nature.

“Gardens are truly invigorating and inspiring, yet I can’t get away from this idea that gardens are also meant to humble us,” Fritz said.

The Gleaning Garden is open to all, but a few guidelines are in place to help it meet its purpose: