You are at:Home»Current in Westfield»Westfield Cover Stories»Bearing the Bible: Lutheran pastor to experience deployment as U.S. Army chaplain

Westfield’s New Joy Lutheran Church Pastor Chris Duckworth has to meet physical standards for his role as chaplain in the U.S. Army National Guard, but he won’t carry a weapon when he’s deployed to the Middle East early next year.

Duckworth joined the National Guard at age 39 and has never been deployed. Now 43, the Carmel resident is the only chaplain in his battalion of 500 soldiers.

An armed soldier, known as a chaplain’s assistant, accompanies Duckworth because as a chaplain, he isn’t authorized to carry a weapon.

“We don’t shoot but we are soldiers,” Duckworth said. “We don’t qualify on a weapon. I’m not allowed to pick up a weapon and fire it. His (armed soldier’s) lane is shooting and my lane is spiritual care and drawing us to that higher power. I don’t know how to shoot and have no desire to. It’s not my job.”

By joining the National Guard, Duckworth fulfilled a longtime ambition of serving in the military. In high school, he wanted to follow his grandfather’s footsteps and join the Marines, but his mother forbade it. Now, he gets to serve his country ministering to soldiers’ spiritual and emotional needs.

“I had no idea there were chaplains in the National Guard,” Duckworth said. “It was a huge ‘a-ha’ moment that re-awakened a sense of call within me to military service, a call that I first heard back when I was a kid.”

Several members of Duckworth’s congregation served in the Vietnam War. They have supported him and shared their details of their experiences.

“They’ve told me some of their stories, and we’ve spoken about what has changed, or hasn’t, in the military since their time in the service,” Duckworth said. “I am grateful for their moral and spiritual support and appreciate that when I’m overseas we’ll have some active church members who can understand what’s going on for me and my family.” 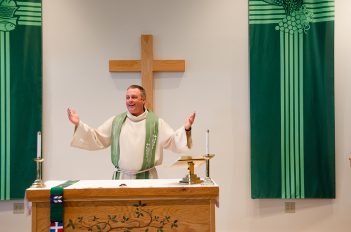 Because Duckworth is Lutheran, he isn’t well-versed in the traditions of other denomination or faiths, but he can support Muslim, Jewish and Christian soldiers in his own way. He provides religious support to soldiers regarding suicide prevention, emotional care and other non-secular support.

“An army chaplain is an approved ordained religious minister to carry out a religious support function,” Duckworth said. “I support Muslim, Jewish and Christian soldiers. (I support) every soldier I can to practice their faith. I am not Jewish, I am not Muslim, I’m not Roman Catholic, so I can’t perform all the rites and rituals those soldiers know, so I help them find the right religious support they need. I’m called to perform religious service or to provide for that religious service, and I love it.”

Duckworth also a tends the needs of non-religious soldiers.

“My call, my faith, drives me to serve people, period, to put the needs of others before myself,” he said. “I am not less comfortable serving a Muslim soldier or a nonbelieving soldier. Not at all. I do it unflinchingly.”

Duckworth arrived at New Joy Lutheran Church in 2014, a month after he joined the Army. An intermittent pastor will serve the congregation during his one-year deployment.

“There will be some element of danger here or there, but I’ll be focused and I’ll be OK,” he said. “But it’s my family and my congregation that’s going to be dealing with some bigger adjustments. They’re sharing the sacrifice, and I’m so grateful they do. It’s not just me who’s doing this, it’s (us) who’s doing this. My congregation is experiencing deployment, my family is experiencing deployment, and the Army couldn’t do it without them.” 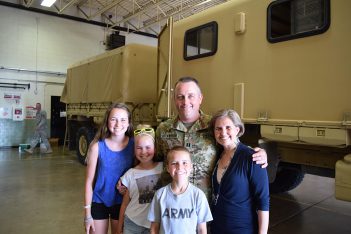 Pastor Chris Duckworth, center, pauses with his wife, Jessicah, right, and his children, from left, Tali, Cana and Naaman, after he was promoted to captain in 2017. (Submitted photo)

Duckworth’s wife, Jessicah, is an ordained Lutheran pastor and program director in the Religion Division at Lilly Endowment, Inc. She fully supports him in following his calling.

“We’ve always believed in following our callings and supporting each other in our ministries, even when it wasn’t easy,” she said. “That approach has taken us from Philadelphia to D.C. to Minnesota and, five years ago, to Indiana for my work. Some of those moves were easy, some were a bit more difficult. So, too, with this. Chris is pursuing his calling. He loves it and we support that. We know it is good and important work. Still, being apart for that long, it won’t be easy on any of us.”

One weekend each month, New Joy Lutheran Church Pastor Chris Duckworth preaches while wearing his army fatigues under his Lutheran pastor robes. Combat boots protrude beneath the robes. He comes straight from his monthly training and doesn’t miss his church services.

“I’ll be here on Sundays with my uniform on underneath my robes, and as soon as worship is done, I run right back to the armory and right back to duty,” he said. “That’s the normal rhythm.”

Early in his tenure as pastor, Duckworth spent three months away from the church to train as a chaplain with the National Guard. He spends two weeks during the summer at training in addition to his monthly weekends.

“New Joy called me to be their pastor knowing I would be in the Army National Guard and supporting that call and realizing times there might be schedule conflicts, I might be pulled into training, that I would have this dual mission,” Duckworth said.