You are at:Home»Current in Noblesville»Noblesville Cover Stories»Building on the past: Father-son duo transforms historic building on Ind. 37

For nearly 80 years, a brick structure has stood north on Ind. 37 at the 256th Street intersection with nothing around but highway and fields.

This week, a father and son duo will launch a business in a familiar local building — the former home of Wheelers truck stop and restaurant — that has been empty since the 1990s. 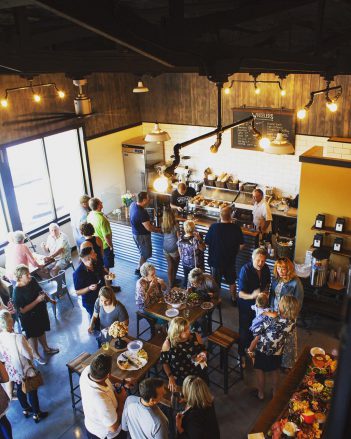 “We had kind of been working on the project for about a year and started building in December around Christmastime,” Nick said. “The old brick diner building was here, and we added an additional couple of thousand square feet off the back. It’s about 50 percent more if you consider the (original) upstairs.”

The brick building was constructed in the 1940s by Nick’s wife Emma’s great-great-uncle, Cecil Scott, who called the diner, hotel and truck stop that occupied it Scotty’s.

“It was one of the only places to stop between Indianapolis and Fort Wayne. It was really popular, and (Ind.) 37 was the main highway,” Nick said. “It was really successful and busy with the diner, truck stop and hotel rooms upstairs. It was kind of a one-stop shop for truckers and tourists. From there, it changed hands a few times. Somebody bought it, it didn’t work. Another person bought it, and it didn’t work. There was a fire in the ’70s. One lady was getting ready to launch (a café) and had the fire. We read an article, and it said the fire was devastating beyond repair, but someone bought it, made it work, and opened it up as Wheelers Café, Wheelers Truck Stop and Wheelers Restaurant. That’s the name that people know. Everyone knows this as Wheelers.”

Nick said although he and his wife knew the spot had been in the family, they had no plans to buy or restore the building until recently.

“Emma’s family still farms around here, and she grew up in a house right down the road,” he said. “So, we knew it was in the family, but two years ago we had no idea we’d be bringing it back into the family.”

Another investor was interested around 2007 and had plans to open a meat market there. 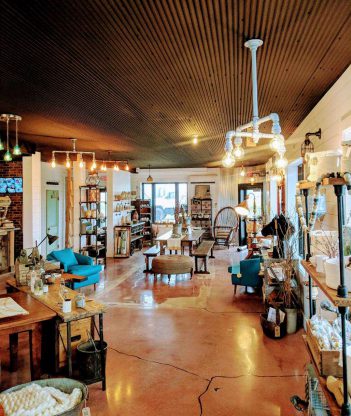 Approximately half the Mercantile 37 building is dedicated to showcasing work from Indiana artisans and makers. Furniture, lighting, general home décor and other items adorn the showroom. (Submitted photos)

“He actually saved the building. He put a roof on it and jacked it up and gutted it,” Nick said. “If he hadn’t done that, it would have been knocked down.”

When the Roudebushes bought the property, it was gutted. Today, the interior walls have been shiplapped or re-bricked. The floors have been ground down to the original terracotta-colored terrazzo, which had previously been covered for decades with tile and other flooring.

“We had to do all-new outside infrastructure, too,” Nick said. “That was one of the biggest challenges was fitting all of that. There’s new septic, a new well, new drainage. That was definitely the hardest part.”

Nick said the store’s emphasis is on local goods. Most of it is filled with items by Indiana makers and assorted specialty products.

“It’s all a mixture of local, vintage and some other stuff we bring in,” he said. “We have 25 local makers right now. It’s all based on quality and trying to fill holes in what we need. We’re pretty selective, and we kind of have a process where we look at people’s followings and their training. We want to be at an artisan level. They don’t need to only be artisans but also need to show that they’re high-quality craftsmen. Dad has a knack for finding neat, vintage stuff.”

Nick and J.R., who, before opening Mercantile 37 had custom-lighting businesses on the side, make all of the interior lighting, which also is for sale.

“We started that a couple of years ago. We sold online,” Nick said. “Dad just retired from corporate food sales, and I was working on my wife’s family farm. I also still teach at Indiana Wesleyan University (as an adjunct professor of art) and make things.”

Upstairs, where hotel rooms once were, is a space for customers to design custom lighting and furniture pieces.

The remaining portion of the upstairs is dedicated to office and conference room space and a lounge area.

Co-owner Nick Roudebush, who owns Mercantile 37 with his dad, J.R. Roudebush, said most people who know the spot usually knows it as Wheelers. 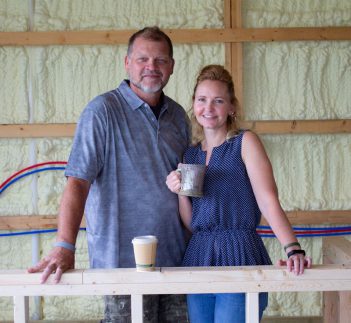 Neal and Angie Fine will operate the new café, built just off the southwest side of the original Wheelers. Together, they have worked in the restaurant industry for more than 25 years.

Much like the Mercantile 37 store, Wheelers will focus on sourcing local food. The coffee is from Cicero, and ingredients for the rotating menu of sandwiches will come from local farms and meat producers.

“The café will also be a market,” Nick said. “We’re going to have local veggies from across the street and other food from the area. The Wheelers menu is really simple, small and will rotate.”