After 22 years with the FBI, Doug Kouns was ready for a new challenge.

Kouns, an Indianapolis resident, is the owner of Veracity IIR (Intelligence-Investigation-Research), an investigation and consulting service at 7060 Pro-Med Lane, Carmel. A ribbon-cutting celebration is set from 4 to 7 p.m. Oct. 18. 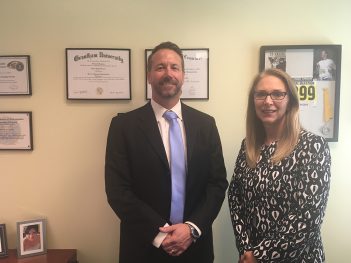 From left, Kouns and Guider.

He is joined by Kathy Guider, a Zionsville resident who retired Aug. 31 after 23 years with the FBI, all in the Indianapolis office. Guider, vice president of Veracity IIR, will lead the training division and oversee investigations, human resources and most administrative functions.

Kouns said agents qualify for a pension when they reach age 50 and have 20 years or more of service. He retired Sept. 10 when he turned 50 and opened the business the next day.

“We want to specialize in legal and corporate clients,” Kouns said. “If they are considering partnership or acquisition of another business, we would do a background investigation to the business that they are potentially going to enter into business with, making sure there are no hidden lawsuits or an employee is going to file a sexual harassment lawsuit against the CEO, stuff they are trying to hide so they get the deal done before it comes out.”

Other items the firm will investigate are workplace violence, embezzlement, misconduct and accident investigation. The firm also will supply legal support with investigations, such as pre-trial interviews and finding witnesses.

“If somebody wants us to put on a seminar for an active shooter, then we can do that,” she said. “We’ve already talked to one law enforcement agency about possibly putting on an interview and interrogation week-long course since I’ve taught those things.”

School safety is another subject Veracity can address.

“My wife (Maria) is a teacher (at Brownsburg West Middle School),” said Kouns, who has two sons at Purdue. “I used to be a high school chemistry teacher, and my sister is a teacher.”

“After Sept. 11, I became a counter-terrorism investigator,” Kouns said,

After six years in Sioux Falls, he got transferred to the Bloomington, Ind., office.  Kouns, who grew up in Hartford City, eventually transferred to Indianapolis as supervisor of field intelligence group. Then, he was team leader for a special operations group, which included Guider. Guider took over as team leader and Kouns went back to working cases.

At the FBI, Guider worked health care fraud and insurance fraud cases, among other assignments. Guider also served as an adjunct faculty instructor teaching classes in interview and interrogation, body language, presentations skills and instructor development throughout the United States and internationally.

Another staff member is Lori Achilles, director of the fraud division, who is a former special agent of the FBI specializing in white collar crime working in the Indianapolis and New York City divisions for more than seven years.  She will work remotely from the Chicago area.