You are at:Home»Current in Zionsville»Zionsville Cover Stories»Fighting for acceptance: Woman defends sister with Down syndrome denied by sororities

Sororities initially began as a way to help women feel connected in predominantly male schools. For many, so-called “Greek life” can be a way to build friendships, become part of a smaller community within a university setting and find opportunities for leadership and service.

But some sororities have been called into question for inclusion issues. Sources such as the New York Post, USA Today and Huffington Post have reported on problematic details of racism and elitism within sororities.

The recent exclusion of a student with Down syndrome from sororities at George Mason University in Fairfax, Va. has raised eyebrows across the nation. 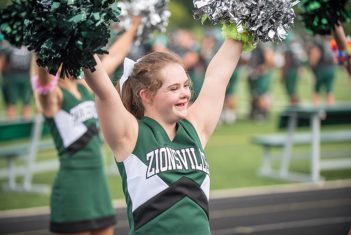 As an NCAA Division I cheerleader at George Mason University, AnnCatherine is the first intellectually disabled collegiate cheerleader in the nation. (submitted photo)

AnnCatherine Heigl, known as AC, is a cheerleader at GMU, is in class eight hours each day, has high grades and works part-time in a preschool. AC graduated in 2017 from Zionsville Community High School, where she was a cheerleader and active in the community.

AC is the first person from Indiana to be accepted to GMU’s Mason LIFE program, open to students with intellectual disabilities. Through the program, students focus on an area of work specialty and after four years receive a certificate of completion rather than a traditional degree.

After making the school’s NCAA Division I cheerleading team, AC became the nation’s first intellectually disabled collegiate cheerleader. She then decided to go through the sorority recruitment process, known as rush, at GMU in mid-September with encouragement from her older sister, Lillie Heigl.

AC visited all eight sororities the first evening, then received invitations to return to two the next day. The following day she was told she would not receive any bids, invitations to join the chapters on campus.

“She did literally get dropped from every single one,” Lillie said.

The sororities’ exclusion of her sister has Lillie frustrated and upset. When AC was rejected by all GMU sororities, Lillie expressed her disappointment via email to the Mason Panhellenic, the governing body of the college’s Greek organizations.

“I felt like in a world that is not made to be inclusive to people with intellectual disabilities, once again she was excluded,” she wrote in the email that was later posted on Twitter. “I hope that your chapters went in with open minds when it came to talking to her. Many chapters have values like scholarship or intellectual curiosity, values that for a person with an intellectual disability might look different.”

In the email, she shared that her own college sorority experience positively impacted her and had encouraged her sister to go through rush. A law student at Syracuse University, Lillie Heigl has added to her workload the task of figuring out why this happened and how to make it right. 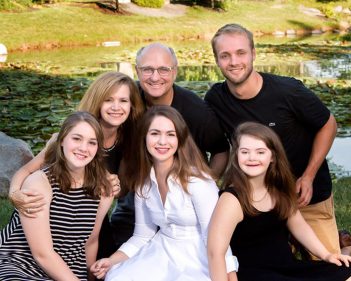 The Heigl family. Front, from left, sisters Mari, Lillie and AnnCatherine Heigl. Back, from left, parents Laura and John and brother Tim Heigl.

The community response she created by tweeting screenshots of the email has taken over her already busy schedule. Her Twitter post has more than 1,400 retweets and 3,800 likes.

Several days later, GMU’s Panhellenic Executive Council released a statement acknowledging that AC was released but stated the selection of members is up to the individual chapters.

“As a council that promotes inclusivity, we recognize that people have been harmed by the decisions of our members, and we are committed to engaging all communities in dialogue on these issues to do better in the future,” the statement said.

“You’re going to have these conversations but what does that actually do? What’s going to change?” Lillie said. “I don’t see concrete action points, which is what I’d really like to see.”

AC refuses to speak more about her experience. Her mother, Laura Heigl, said she compartmentalizes as a way of coping.

“She just said, ‘My heart hurts, I don’t want to talk about it,’” Laura said. “We know how she feels about it.”

Laura said AC is a persistent and determined person, but despite her successes, this is a different kind of rejection.

“It feels personal. At the end of the day her question was, ‘Why does no one want me for their sister?’” Laura said.

LIFE students weren’t able to rush until last year, when the only woman who went through the experience received a bid. AC was the only LIFE student to rush this year.

Heidi Graff, director of the Mason LIFE program, said AC was among 49 students at GMU who didn’t receive bids out of a reported 288 who rushed.

Although there’s no information about the number of students with disabilities involved in Greek organizations nationally, Shawn Eagleburger, Pi Beta Phi’s director of strategic operations and communications, said the sorority follows a non-discrimination policy and will not tolerate discrimination by its chapters.

Kristen Douglass, program manager of digital marketing for Alpha Phi, said, “We are saddened by the recent events at George Mason University. Our GMU chapter is committed to joining the dialog to ensure an inclusive recruitment process for all young women who seek to join the (National Panhellenic Council) system, and that students in the Mason LIFE program have the support they need should they join any NPC member organization.”

The international headquarters for the other campus sororities did not respond to messages.

Lillie is attempting to clarify whether the issue comes down to individual bias or whether national policy for each sorority might limit students in the LIFE program who are not eligible for a university degree.

“I hope the outcome, regardless, is a more inclusive environment and a larger-scale conversation for everybody about the importance of representation for people with disabilities and the value that they bring to the table,” she said.

October is Down syndrome Awareness Month

The National Down Syndrome Society started Down Syndrome Awareness Month in 1984 to celebrate those with Down syndrome and to spread awareness, advocacy and inclusion throughout communities.