You are at:Home»Current in Westfield»Westfield Cover Stories»History in the making: Wheeler family recognized for 150-years of farming

A well-known family whose ancestors lived in the Town of Westfield when it was created was recently recognized at a ceremony in August during the Indianapolis State Fair in Indianapolis. 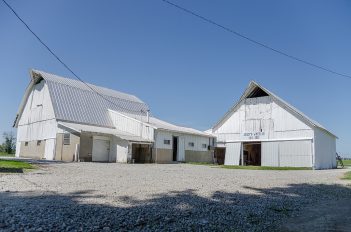 The farm at 181st Street and Wheeler Road was deeded to the Wheeler family in 1851. (Photo by Daniel Nolan)

Dave Weiss, former owner of Westfield Pharmacy, compiled a decade of research to apply for two Hoosier Homestead Awards, which he presented to his mother-in-law, Mary Lou Day.

The awards, a centennial and a sesquicentennial award, recognize the Wheeler farm as being owned by the same family for 150 years.

Day, whose maiden name is Wheeler, was born in the original Wheeler house on 181st Street and Wheeler Road, where Dave and his wife, Becky, Day’s daughter, live.

Weiss began doing research for the award approximately 10 years ago, but he went at it full-bore when he retired from the pharmacy last year.

“I’m a history buff,” he said. “When I went to the courthouse (for documents), I was looking for (data for) the hundred, the centennial award.”

However, as Weiss dug further into his in-laws’ history, he realized the farm also was eligible for the 150-year award.

“I knew that Joseph Benjamin Wheeler received the property from the original Joseph and Delilah Wheeler, but that was 1867,” Weiss said. “I wanted to go back further and see how far back did it go. That’s where I found that Joseph purchased it from Jonathan Mendenhall.”

The farm was originally deeded to the Wheeler family on Oct. 4, 1851. The original plat was 80 acres. It is much larger than that today. Weiss said he assumed the Wheeler family farmed corn and grains, but eventually a dairy farm  began operation until the mid-1980s.

The Wheeler house where the Weisses currently reside was built in the late 1800s. Weiss said, as a history buff, he also loves antiques. Many components of the house remain the same today.

“The logs in the basement have bark on them,” he said. “It still has some of the original components. The basement and original construction are original.”

Approximately 25 years ago, the Weisses renovated the home.

Weiss compiled all the information and presented it to Day on Mother’s Day.

“I was so surprised and so happy because I had never taken the time to do it,” she said. 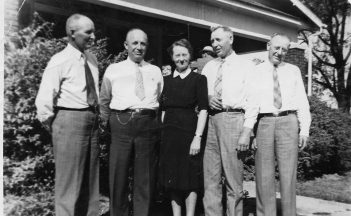 Day said the Wheelers practice many of the same family traditions from when she was a child.

“All the Wheelers gathered here on Christmas Eve, and the dining room was full, the kitchen was full and us kids had to sit on the stairsteps,” she said. “Christmas presents would be halfway to the middle of the living room floor, and we always had oyster stew and sandwiches.”

Today, Weiss said a lot of family meals are still held at the house.