Just four months after the May 25 shooting at Noblesville West Middle School, the school’s nurse, Megan Schlueter, is being recognized locally and statewide for the care she provided that day.

On Sept. 26, Schlueter was awarded Caregiver of the Year by the Indiana Hospital Association at its annual convention in Indianapolis. She was nominated by Riverview Health Chief Nursing Officer Joyce Wood after receiving the hospital’s Daisy Award.

“I think it all attributed to the circumstances on May 25,” Schlueter said. “I think it’s just such a story that is where our culture is right now. So, I think that is probably why it’s getting the different attention.”

Schlueter’s career began with an ER nurse internship through Indiana University, eventually leading to what she now says is the perfect job for her at NWMS.

“Riverview employs all the school nurses, trainers, anything medical at the school. And typically, when people think about school nurses, they think they’re handing out Band-Aids or taking temperatures,” said Brandy Hill, director of marketing and PR at Riverview Health. “They are taking care of kids with complex medical issues, so they have to have experience and really be able to take care of the kids.”

“I’ve been a stay-at-home mom with my kids for several years,” Schlueter said. “I just started back as a school nurse last November. I’m in a middle school that has close to 1,350 to 1,400 kids, and there are days when I see 70 kids. It’s busy, and kids see the school nurse for a lot of different reasons. There are more serious issues like diabetic students, seizures and kids with (gastrostromy) tubes, so there are a lot of kids who need good care in the school system. I think my ER background was great because you never knew what was coming through the door, and you had to be ready for it and ready to give the right care. I think that’s what enabled me to keep the composure I was able to keep (on May 25).

“But ER is a controlled environment with lots of people to help you,” she added. “So, I think just from that perspective, yes, I went into a certain mode, but it was definitely different. I had fears like, ‘Were my children going to be involved in this? How many children?’ It’s our children who should be safe at school, so that’s the hardest thing for me, to think that this is part of our kids’ story now. When someone brings up middle school, for the rest of their life, this is going to be part of their story, and my heart breaks for them.”

Schlueter is a third-generation Noblesville resident. She graduated from Noblesville High School in 1994. After college, she worked at St. Vincent Health as an ER nurse for six years before stepping back from nursing to become a stay-at-home mom.

“I was home with the kids for 13 years. I kept up my nursing license because I loved nursing and ER, but after having my own family, I wasn’t sure I wanted to go into that knowing I’d have to work weekends and holidays,” Schlueter said. “So, when the school nurse position became available, I knew it was the perfect job for our family situation.”

Schlueter was highly involved as a volunteer at NWMS for three years before accepting the school nurse job.

“I had two children (at NWMS) last year, a seventh- and eighth-grader. (Volunteering) is where I grew this love of interacting with the kids,” she said. “Even though I have my own two, I really saw how effective you could be with kids who didn’t want to look you in the eye when you walked in, but I made it my challenge to interact with them. It was amazing how that little time with someone could really change the way that they acted.

“I really got to know the office staff well and really enjoyed volunteering there,” she addied. “I love middle school kids and love the age, so one day, when I was leaving volunteering, (Principal Stacey Swan) said, ‘Hey Megan, just wanted you to know the full-time nurse position is going to be available,’ and I was like, no way, I’m not going back to full time. I’m a stay-at-home mom, and I love what I’m doing, but then that afternoon, I called back and knew I had to take this job, and I love it. A month into it, I was so thankful.” 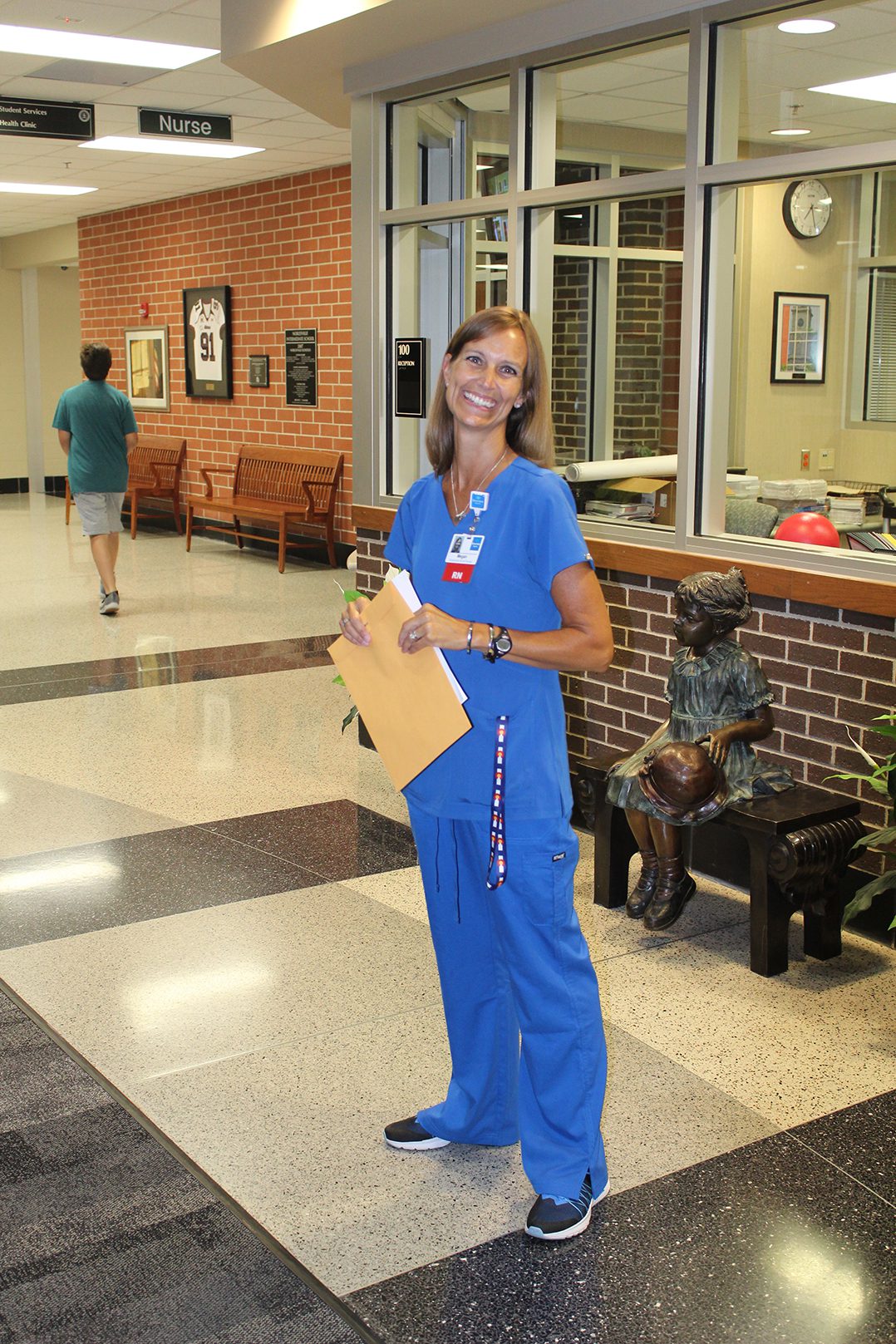 Noblesville West Middle School nurse Megan Schlueter began her job in November 2017. She lives in Noblesville with her husband, David, and three kids, Anna, a freshman, Jacob, an eighth-grader, and Andrew, a second-grader. They have a beagle named Indy. 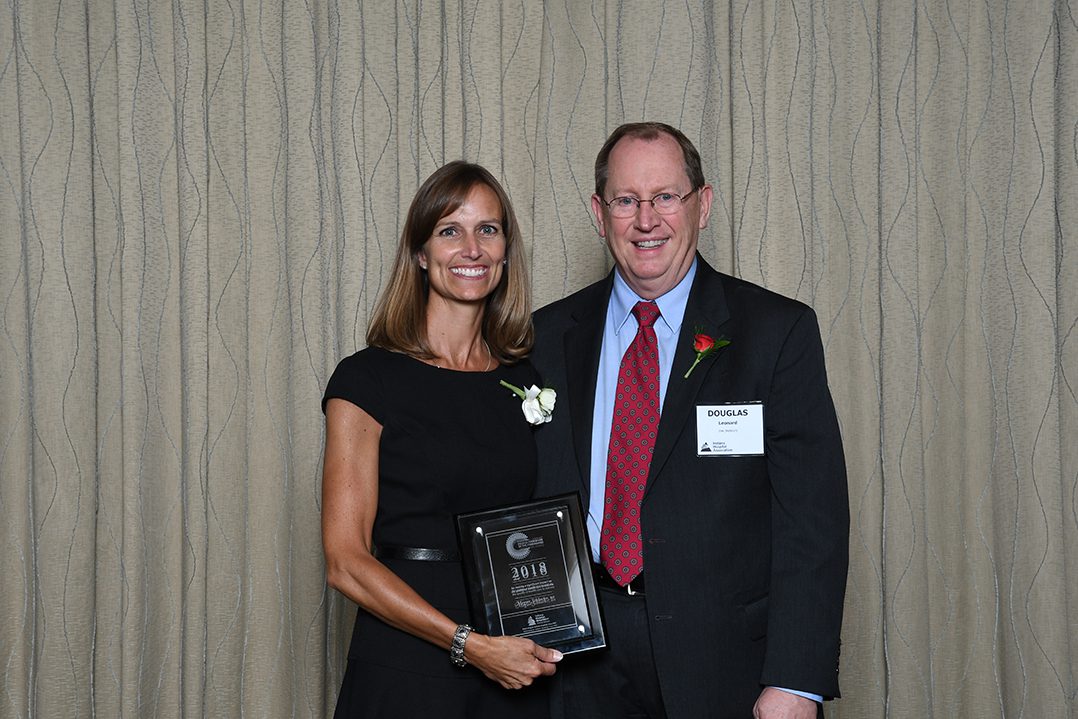 “The Daisy Award is an award we give out quarterly. It’s a national award that was started by a family,” said Brandy Hill, director of marketing and PR at Riverview Health. “They had a son who had a complex medical issue, so they were in and out of hospitals quite a bit, and they wanted to start an award to honor all of the nurses who played such an important role in his care. Most hospitals give out the Daisy Award. Anyone can nominate a nurse for a Daisy Award, whether it’s a coworker, patient, manager, whomever, so quarterly, we have an awards ceremony where all the nominees are honored, and then there’s one winner.”