You are at:Home»Current in Zionsville»Zionsville Community»ZMS student has discus success

Essley, 12, took first place in shot put and discus in the 11-12 age group at the recent USA Track and Field state and regional meets in Muncie. 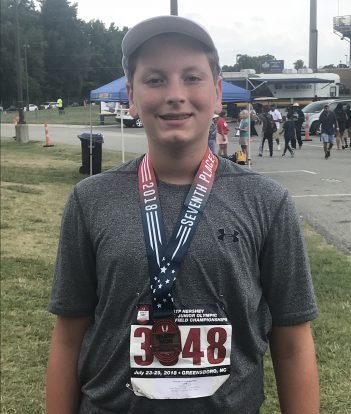 “I improved a lot through the competitions,” said Essley, who had a personal best discus toss of 100 feet, seven inches in the regional.

He also had a personal record throw of 37 feet, 7 1/4 inches in the regional competition.

In his first national meet, Essley finished seventh in the discus, earning All-American honors, with a throw of 95 feet, 11 inches at the USA National Junior Olympics Track and Field Championships in Greensboro, N.C. in late July. He placed 18th in the shot put.

Essley got interested by watching one of his mother’s co-workers, Rod Ferguson, coach his son Eric in shot put and discus at Noblesville High School.

“When Rod’s son, Eric, was a senior, Fin would watch him throw. Rod really started working with Fin when he was in fourth grade,” Elley’s mother, Amy Essley, said.

Ferguson decided to help Essley with his throws as a ZMS assistant this past spring. He then coached him during the summer meets.

“He’s got real talent,” Ferguson said. “I would take my two kids to those Junior Olympic meets and I know how hard it is to medal at those things. He was able to do it in his first year.”

“You ask him to do something when you are not there and he would do it,” he said. “He’s very coachable.”

Ferguson was a NHS assistant coach for two years when his son was competing. His daughter, Alex Ferguson, threw the shot put and discus for Western Michigan after graduating from Albion (Mich.) High School.

“He had always coached his kids, so I think he was looking for someone else to take under his wing,” Amy said. “Fin worked really hard to get there which is what we’re most proud about.