You are at:Home»Current in Carmel»Carmel Community»Carmel High School junior refocuses on strengths, conditioning on way to state singles tennis title

After all, he had blown by Thieneman 6-1, 6-2 during the regular season. 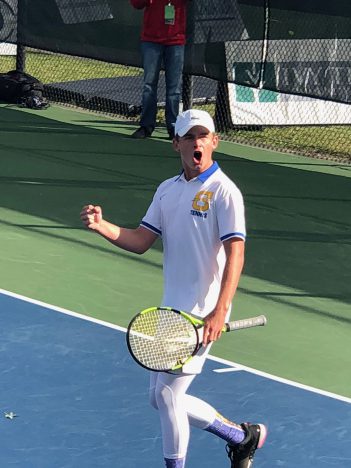 “After that loss, I started focusing in and working out a lot more,” Thieneman said. “My movement just got a lot better. I started hitting the ball a lot better. I hit a lot of forehands. I zoned it and played my best tennis.”

Thieneman turned the tables, beating Harris 6-0, 6-3 Oct. 20 in the IHSAA state singles championship at Park Tudor School in Indianapolis. Thieneman finished with a 21-1 record. Harris was 19-2.

After losing to Harris, Thieneman made an effort to improve his conditioning.

“He got back to playing to his strengths instead of worrying what he needs to do to play against what an opponent is going to do against him,” Hanan said.

“Even though we lost in doubles, that is probably the best we played all year,” Hanan said. “They were going against two of the better players in the state playing together at No. 1 doubles. We just had a couple break points not go our way. We had some chances in that third set.”

The Greyhounds had captured the state team championship Oct. 13.

“It was sweet to clinch (the third point for) the team title and then come back the next week and get the individual title,” Thieneman said.

Thieneman moved to CHS his sophomore season after playing at Louisville Trinity High School as a freshman. As a sophomore, he played No. 2 singles behind Patrick Fletchall, who won the state singles titles his junior and senior year.

“I learned a lot from him,” Thieneman said. “It was a really good experience playing with him for a whole year. He was at a whole other level. That helped me grow as a player.”