Catelyn Combellick was well prepared for her first foray into the pageant world.

The Carmel High School sophomore took public speaking lessons and received instruction from peers on how to walk. 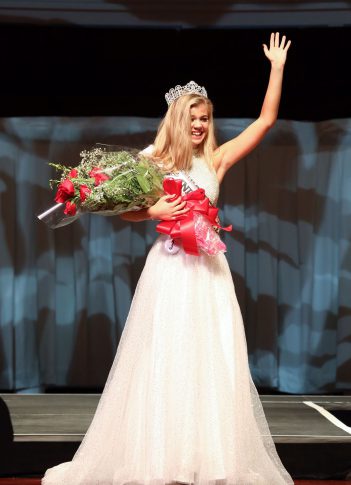 “I was so nervous,” Combellick said. “I tried not to let it show. I think the four-minute interview at the beginning was the most nerve-racking. It was just me and two panels of judges. I had no idea what to expect and what kind of questions they were going to ask. After that I was so ready to walk on stage and do everything.”

Combellick must have done just fine, because she was named the 2019 Miss Indiana Teen USA Oct. 21 at the Palladium at the Center for the Performing Arts in Carmel. The 2019 date for the Miss Teen USA pageant date hasn’t been set yet.

“I was convincing myself I had to get a year under my belt before I could actually be competitive (in pageants),” Combellick said. “I had no idea this would happen. I made top 12 and I was so proud of myself.”

The group was trimmed to the top five before she was crowned. Combellick, 15, said the experience taught her a lot about herself.

“There was another side of me I’ve never seen before,” she said. “This confident, independent woman I had no idea was me.”

Combellick has been training with a national public speaking expert to improve her confidence.

“Once I realized I can be myself and that’s enough, it helped me get over that fear,” Combellick said. “I love talking to people now.”

Combellick credited the other contestants for her success.

“They are all probably the most sweet and most genuine girls I ever met in my life. I had no idea I would be falling in love with 20 girls in the span of two days,” she said. “I was already in love (after five hours) of working with them. They helped me with my hair, how I was doing the walk and talk. They were so eager to help me.”