Zionsville cartoonist and author Rob Harrell will present his three-part series, “The Life of Zarf,” at 3:30 p.m. Nov. 15 at the Hussey-Mayfield Memorial Public Library. The event will include bingo, jousting, a drawing and a book signing. 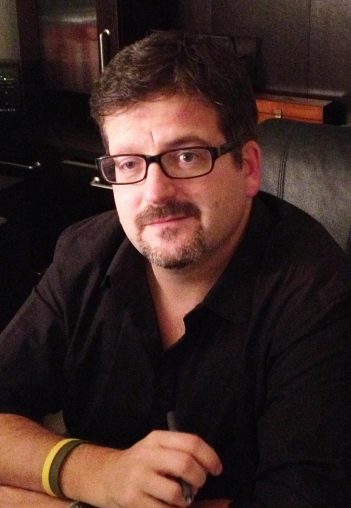 Rob Harrell will present his three part series, “The Life of Zarf”, 3:30 p.m. Nov. 15 at the Hussey-Mayfield Memorial Public Library. “The Trouble with Weasels” is the first book in the three-part series.

“The Life of Zarf” is the story of a troll named Zarf and his two best friends who know how to make the most of life at the bottom of the school hierarchy.

“Trolls are kind of the ultimate underdog. Nobody likes trolls. They’re usually the bad guys,” Harrell said. “And even the classic illustrations are so ugly and demeaning. I thought life in middle school would be particularly rough for a troll.”

According to Harrell, the idea for “The Life of Zarf” just popped into his mind.

“I love the process of building a whole new world where you get to make up the rules, the characters, all of that,” he said. “And working in a fairy tale world gave me a lot of inside jokes with the reader, like the idea of having the grown–up Goldilocks be the lunch lady because she knows her way around a bowl of porridge.”

When it came to naming his main character, Harrell said he brainstormed and came up with several funny-sounding names. Zarf stuck.

Harrell, who created, wrote and drew the syndicated daily comic strip “Big Top” from 2002 to 2007 and currently writes and draws a daily strip, “Adam@Home,” said he told his parents he wanted to be a cartoonist in the fourth grade.

“I went to Ringling School of Art and Design thinking I wanted to be a Disney animator, but by the time I got out I had switched gears and wanted to try my hand at freelancing,” he said. “I loved writing my comic strip, ‘Big Top.’ Then I did my graphic novel (‘Monster on the Hill’) and some graphic middle-grade books. I slowly started realizing I like the writing part as much, if not more, than the art part.”

Response to the trilogy has been positive.

“I mean, they’re not burning up the charts necessarily, but the response I’ve gotten from kids has been amazing,” Harrell said. “Kids seem to really respond to the character and the humor, which is what it’s all about.”