You are at:Home»Current in Fishers»Fishers Community»Fishers resident to appear on ‘Master of Arms’ show

A Fishers resident will be one of three forgers competing against each other during the 10 p.m. Nov. 2 Discovery channel showing of “Master of Arms.” 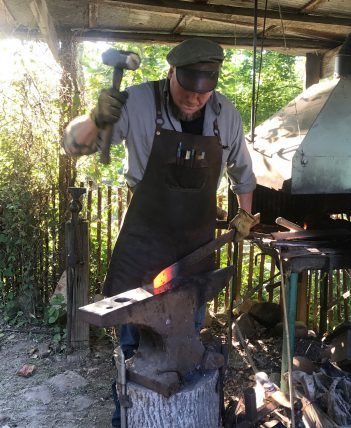 Sharek Gadd works at his forge on the White River in Fishers. (Submitted photo)

Sharek Gadd lives on the banks of the White River in Fishers, and he forges commissioned works for organizations such as the American Red Cross, the American Lung Association, the United States Special Forces Association and the Infantry Bugler. Gadd has worked with metals since high school.

“It’s always been fascinating to me,” said Gadd, who forges tools, chests with locks, guns, knives and other items. “I do a lot of donation work for father-son camps. Dads bring their sons over, and we forge a knife together.”

Gadd was born in a commune called Padanaram — a primitive living experiment — in Silverville, Ind. in 1971. He joined “modern life” after a hereditary cancer killed several of his siblings and his father. Gadd originally heard about “Master of Arms” while in Kentucky, where he had some of his items on display at a long-rifle event. A friend he knew was there and approached him.

“He’s always quick to shout praise or offer advice. He’s done work for movies, and he came across a call for applications (for ‘Master of Arms’) and reached out to me,” Gadd said.

Originally, Gadd was hesitant to apply because he thought of himself as a private person. However, his desire to make things and share them with others encouraged him to explore it.

“I didn’t expect anything to come from the application. The world’s pretty large,” Gadd said. “I’m grateful they took a chance on me.”

“It should be pretty exciting. There’s a lot of passion, a lot of stress, a lot of talent, a lot of sparks and flames,” he said. “It’s kind of neat being in the public eye. I always kept myself pretty private.”