You are at:Home»Current in Geist»Geist Cover Stories»Enrollment freeze: Pause on new out-of-district students passed by Mt. Vernon school board

At the beginning of the month, Mt. Vernon Community School Corp.’s board of trustees confirmed the decision of district officials to put a hold on students enrolling from outside the MVCSC district.

Effective immediately, from Oct. 1 to June 1, 2019, Mt. Vernon’s five schools will not accept new students who live outside of the district’s boundaries, which include all of Vernon and Buck Creek townships in Cumberland, Fortville and McCordsville in Hancock County. The change does not affect those who are already students at MVCSC.

“We have recently secured the services of a demographer to complete a demographic study for our district and kind of give us an idea of where we’re going to be,” said Chris Smedley, CFO and interim co-superintendent for the district.

As of Oct. 1, the district has 673 students enrolled who live outside district boundaries – 322 across the district’s three elementary schools, 127 at the middle school and 224 at the high school.

“This resolution has been put in place right now just to kind of put a cap on the out-of-district flow that’s coming in,” Smedley said. “That demographic study is going to help us drive a lot of decisions, one of them being what we want to do as we move forward with considering opening that possibility back up to out-of-district students in the future. That’s really going to drive that discussion, as well as what we need to start planning for with possible expansion if those numbers show continued, substantial growth.”

Surrounding the district are very large school systems like Hamilton Southeastern and the Metropolitan School District of Lawrence Township.

“I personally haven’t drilled down to see exactly where the (out-of-district students) are coming from,” Smedley said. “I know, just in general, I think most of the students are coming from the Lawrence area.”

“There is a good amount from Hamilton County, too,” said Maria Bond, MVCSC’s director of community relations. “With our district bordering both Marion and Hamilton counties, I think we’re getting students from both sides.”

Bond also said she believes MVCSC is appealing to families because it has more of a personal touch, offering more one-on-one time with teachers and smaller class sizes compared to some neighboring districts.

Smedley said academic performance in recent years also has drawn the attention of parents outside the district.

“Our academic performance over the last few years has been very attractive,” Smedley said. “This is definitely a district that has shown improvement in those areas. We were an A District (designated by the Indiana Dept. of Educaton) last year, and we anticipate being an A District again this year. So, I think that attracts a lot of interest for people around our area.”

Smedley said over the past five years, MVCSC enrollment has grown, on average, by approximately 150 students each year. In addition to out-of-district students wanting to attend school there, housing within district boundaries also is growing significantly.

“We do meet with our towns quarterly – the Town of Cumberland, Town of Fortville and Town of McCordsville,” Bond said. “So, we get updates on our housing markets, what has been proposed, what might be coming and an actual number of plots that are planned. That data has been really important to get us to the point that we’re at right now.”

“Another thing we hope to take away from our demographic study is just how many new families will be moving to the district because of all the new housing developments that are going up, and again, just trying to stay ahead of that as well, both from a possible next phase as far as our buildings and facilities go, but also in helping us decide what we want to do moving forward with our out-of-district enrollment. Our biggest challenge in keeping up with that growth comes from those tax-supported funds. That’s the issue. Obviously, we’re trying to manage class sizes, but we’re also trying to manage space in our facilities. So, those issues typically are funded through our tax funds, and that’s why we’re trying to take a proactive, responsible approach to be able to stay on top of that and manage that appropriately. At this point, there has not been (a discussion of a referendum). We are a data-driven district, so we want to make our decisions based on that, and that information is really important for us to have before we can move forward.”

Smedley said the study has already begun, and district administrators hope to have final results by the end of December, which would then be presented in early 2019, likely at the January or February school board meeting.

Board meetings typically occur on the third Monday of each month and begin at 7 p.m. at the MVCSC administrative building, 1806 W. Ind. 234, Fortville. Parents looking to newly enroll their child are encouraged to contact the district officials in April 2019, as the resolution will come under review annually each spring. 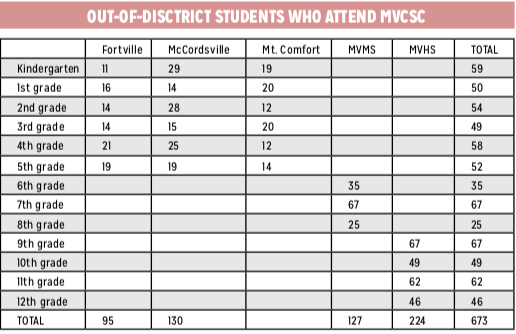