You are at:Home»Current in Carmel»Carmel Cover Stories»Feeling like A Kid Again: Carmel woman leads local expansion of nonprofit that provides adventures for ill children

An Ohio nonprofit has expanded to Indiana to help children with life-threatening illnesses feel like kids again, and a Carmel resident is leading the charge locally.

Katie Pappas of Carmel is the executive director of the Indiana Chapter of A Kid Again, which gives children and their families a chance to take a break from the daily grind of dealing with illness and create lasting memories through year-round A Kid Again Adventures. Experiences include trips to local amusement parks, zoos and sporting events. The organization provides more than 30 adventures to more than 13,000 people each year and has served more than 219,000 people since its inception in 1995.

The Indiana Chapter is the first outside Ohio and is part of a strategic shift to expand the organization to a national level.

“I just fell in love with the mission,” said Pappas, who became executive director April 30. “What we’re trying to do is just help families take a time out from their illness and make some memories.”

Pappas previously served as the director of development for the Juvenile Diabetes Research Foundation.

Pappas said the anticipation of A Kid Again Adventures helps keep children with life-threatening illnesses inspired, and the memories can help them persevere until the next adventure.

“The anticipation of our adventures for these families and these children is almost stronger than their actual participation in the adventure,” Pappas said. “Their excitement and the fact that they have something to look forward to can help them get through a treatment. If we can keep that loop going and make it strong and consistent, there’s so much power behind that.”

In July, Carmel resident Mindy Cameron and her sons, Christopher and Ross, attended the A Kid Again Adventure at King’s Island. When he was 2 years old, Christopher, now a 17-year-old a junior at Carmel High School, was diagnosed with Duchenne muscular dystrophy, a genetic condition that has slowly eroded his physical capabilities. Cameron said the progressive disorder is the most severe and most common form of muscular dystrophy.

“He’s the only disabled kid in the room most of the time, so these events make him feel like he’s part of a community,” Cameron said. “I think it’s nice that they provide funding for families to go out and have a great time, to be typical.”

“To be around a lot of kids like him is very good for him because it makes him feel like he’s not alone,” she said.

Cameron has been an active advocate in the Duchenne community for the past 15 years. She is the advocacy director for the Carmel-based Duchenne Family Assistance Foundation, run through the Little Hercules Foundation. Cameron said Indiana is a much friendlier state for people with disabilities because of available resources.

The adventures are group activities led by volunteers A Kid Again employees and are designed to include the entire family. Each family is provided with parking, a meal, complimentary tickets, a dedicated A Kid Again volunteer and a gift for every child in the family younger than 20.

“They all look just the same in this environment, and these families have the opportunity to connect with one another and to know that they aren’t the only ones struggling,” Pappas said.

“I think Indiana was chosen because we have two incredible children’s hospitals right here in our backyard,” Pappas said. “Indiana is a very generous, small community at the end of the day, and there’s no shortage of families here who are going through life-threatening illnesses. It was just a great, natural fit to expand here.”

The organization serves children diagnosed with illnesses including cancer, cerebral palsy, muscular dystrophy and lesser known neurological diseases. A Kid Again’s mission is to foster hope, happiness and healing for seriously ill children and their families by creating a communal and interactive environment for families to experience adventures together.

“For A Kid Again, we want to help be the reason these kids continue to thrive and they continue to push through whatever their situation is,” Pappas said.

Carmel resident Jimmy Pierri serves on the A Kid Again advisory board for the Indiana Chapter. He is senior manager of digital customization at LIDS Sports Group in Zionsville and discovered A Kid Again through the company’s official partnership with Ohio State.

In 2016, LIDS Sports Group awarded A Kid Again the “Tip of the Hat Award” and donated $125,000 to the organization. In 2017, LIDS raised funds for the nonprofit in its Midwest stores through its “Just Do It” campaign.

Pierri said A Kid Again Adventures help fuel the recovery for children and their families.

“In the adventure, in the moment, you see the disease or whatever is ailing these kids, you see it kind of go away,” Pierri said. “It inspires them to get well.”

Pierri has attended several A Kid Again Adventures, including trips to Kings Island, and said the adventures cause a ripple effect of smiles, relief and joy for the children and their families.

“Seeing the families at an adventure, despite their circumstance, there’s just a sense of relief that you can see through their smiles,” Pierri said. 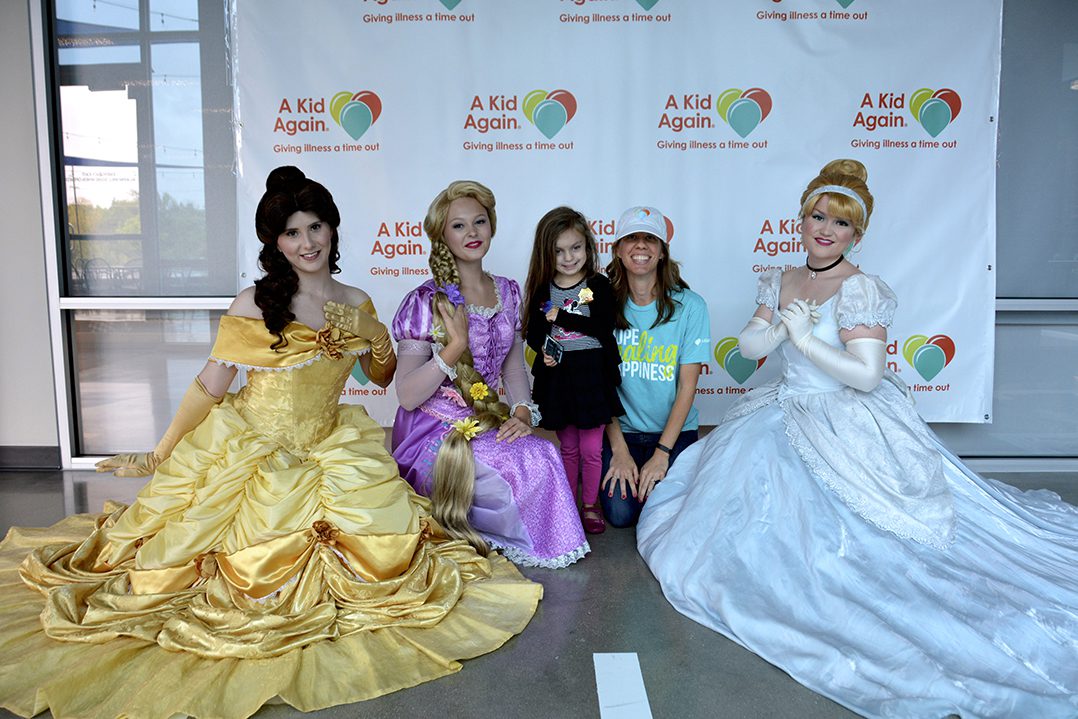 Ella Rose, 5, of Fishers pauses with Katie Pappas, A Kid Again executive director, and princesses at an A Kid Again adventure Sept. 8 at LIDS Sports Group in Zionsville. (Photo by Lisa Price)

There are several ways to become involved with A Kid Again.

ENROLL: To enroll in A Kid Again, a child must be younger than 20 and diagnosed by a medical physician as having a life-threatening illness. Qualified participants can fill out a form on the A Kid Again website to enroll. All adventures are provided free of charge to the children and their families.

VOLUNTEER: Volunteers are a crucial part of helping make the A Kid Again Adventures a success. To apply, visit akidagain.org/volunteer.

DONATE: A Kid Again is seeking local sponsors and peer-to-peer fundraising to help facilitate adventures. Donations may be made at kidagain.org/donation or text AKA to 41444.

Share. Twitter Facebook Pinterest LinkedIn Tumblr Email
Previous ArticleTeaching a green thumb: Local college professor puts students in the garden to give back to community
Next Article A township tax: Township approves $15 million bond split into three series, the first of which is $5.7 million
Follow us on Social Media