You are at:Home»Current in Carmel»Carmel Community»Survivor of 2 airplane crashes to speak at Brooke’s Place breakfast in Carmel

Austin Hatch is well aware of the math.

Hatch told one reporter that an MIT statistician placed the odds of surviving two plane crashes, where fatalities are involved each time, as one-in-11 quadrillion and 560 trillion.

Hatch figures one reason he survived those astronomical odds is to help others. He will share his message at Brooke’s Place Legacy of Hope breakfast, an annual fundraiser,  set from 7:30 to 9 a.m. Nov. 15 at the 502 East Event Centre in Carmel. The event coincides with National Children’s Grief Awareness Day. Indianapolis-based Brooke’s Place is committed to helping children overcome the grief of losing a loved one. 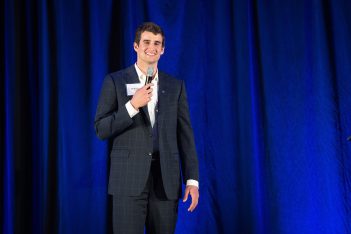 “I feel blessed to have a platform where I can hopefully inspire and encourage other people and provide some value for some people who may be going through a tough time on their own,” Hatch said. “We don’t always have control over the things that happen. I firmly believe we have complete control on how we respond.”

In 2003, Hatch’s mother, Julie, younger brother, Ian, and older sister, Lindsay, died in a plane crash near Fort Wayne. Hatch and his father, Dr. Stephen Hatch, survived. Eight years and nine days later, Hatch, then 16, who had played two seasons for Fort Wayne Canterbury High School and had committed to play basketball at the University of Michigan, lost his father and stepmother, Kim, in a second crash in Michigan. Dr. Hatch was the pilot in both crashes.

In the second crash, Hatch suffered brain trauma, fractured ribs and a broken collarbone. After being in a drug-induced coma for two months, he had to learn to walk and talk again.

Yet, he made it to Michigan and played in five games in the 2014-15, scoring one point. He remained with the basketball program as a student assistant.

“I got in some games when we were already up 20,” he said. “I had a shot to score a couple of times and I made a free throw. I obviously wish I could have played in crunch time when it mattered, but obviously my situation prevented that from happening.”

Hatch finished high school in Los Angeles, where he lived with his paternal uncle and aunt.

Hatch, 24, graduated from Michigan in April and works in the corporate office of Domino’s in Ann Arbor. He married former Michigan volleyball player Abby Cole in June.

“It was a dream come true,” Hatch said of the marriage.

Hatch said he seeks to provide a different way to think about things to his listeners when he shares his story.

“My hope is that the people take one or two things and use that as they encounter adversity in their lives,” Hatch said. “We have the opportunity to honor those we loved by how we respond. My message is about the story after the story. Everyone knows the story of the kid that survives two plane crashes and loses his entire immediate family in the process. I’m not diminishing how awful that is. I believe the real value is how we overcame that. I say we because I wasn’t the only one impacted by the loss. It was family, friends, teachers, coaches, thousands of people praying for me around the country that I’ll never meet. I believe all those people had a role in my recovery. We can’t overcome it alone.”

“I feel I’ll have the opportunity to see my family again one day,” he said. “I have more work to do on Earth. Evidently, He has bigger plans for me,”