You are at:Home»Obituaries»Obituary: David Chandler Parkes 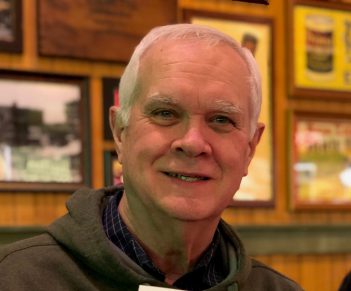 After high school, David attended Indiana Wesleyan University, where he received the master’s degree with emphasis on Pastoral Care, graduating with a 3.8 GPA.

He continued his education at Kernersville Wesleyan College, where he received the bachelor’s degree in Biblical Literature.

In 2018, Dave began working as a funeral coordinator and minister at Grace Church in Noblesville and created resources and processes that are now being used to coordinate his own funeral.

David adored his wife, Judy, with whom he celebrated 50 years of marriage in June of this year. Family gatherings with his children and grandchildren were among his most treasured memories. He never missed his kids’ or grandkids’ special programs, games, plays or musicals.

David was a gentle giant who spent his life caring for people. He never met a stranger and loved hearing others’ stories as much as he loved telling stories.

Dave had a disarming sense of humor and loved to laugh, tell stories and quote funny movies. But most every conversation with him eventually led back to the one thing he cared about most: His abiding faith in God. His life had been transformed by eternal love, and he wanted everyone he met to experience that unconditional love.

Always quick to offer help to anyone who had a need, Dave had an innate gift for comforting people during the darkest moments of their lives. He was captivating and compassionate toward anyone and everyone, always making room in his heart for more friends. He was accomplished, educated and had a vast amount of experience in ministry and funeral work, but he rarely spoke of his own accomplishments. He chose, instead, to shine a light on others.

In addition to his parents, David was preceded in death by his infant son, Edwin Chandler Parkes, who was born Oct. 19, 1970, and lived for only one week.