When Westfield High School administrators designated October for Kindness Month, WHS art club students decided on a project to spread inspirational and motivational messages to other students. That project involved painting inspirational quotes on bathroom stall doors near the auditorium.

The club originally planned to paint stall doors in several bathrooms, but it soon became obvious that bathroom stall doors weren’t the right material to paint on. 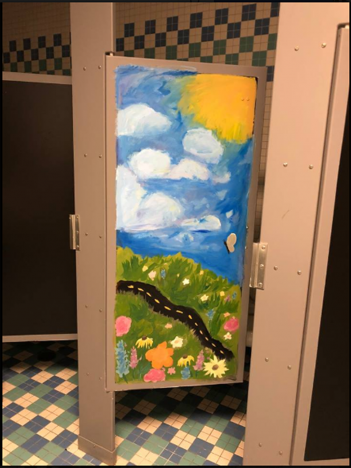 “I think it’s the nature of the plastic door. It’s made so it’s really hard for things to stick on it, like graffiti,” art club sponsor Lindsay Frey said.  “We were kind of hesitant to really sand the door and destroy that surface, so we lightly sanded the door, added a primer, painted the door black and then the art club worked in groups to come up with designs to promote kindness and positivity and motivation.”

Because of the doors’ material, the paint didn’t stick and came off easily. The students then decided to just paint the bathrooms near the auditorium because they are used frequently during lunch hours and weekend events

“We like to try and do things instead of just working on independent projects for the kids in the club,” Frey said. “They like to try to do more community and school-based projects.”

The art club’s next project is painting Carey Ridge Elementary School’s 10 class words on canvases to hang in the elementary.