A teenager tired of repeatedly checking the mailbox every day was the driving force behind a product that alerts homeowners to activity at the mailbox now being marketed by a Carmel family. 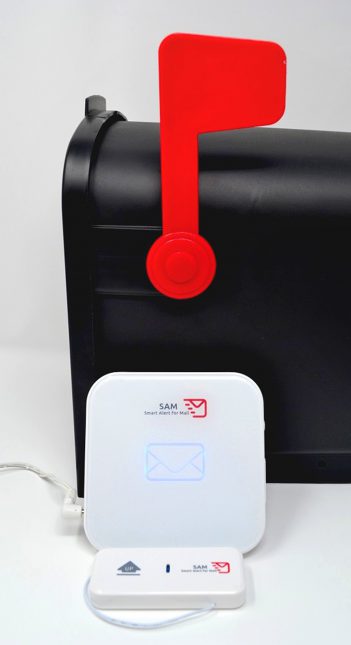 Smart Alert for Mail alerts users when a mailbox has been opened. (Submitted photo)

“Smart Alert for Mail, or SAM, was originated by my 16-year-old sister, Selam, who came up with it for a school project. She was 14 at the time. She was getting tired of having to run back and forth to the mailbox every day and was pushing the task on my brother, Sam,” said Alex Waclawik, product manager for SAM. “With the help of my inventor and entrepreneur dad, she made the very first prototype.”

After more than a year of hardware and software development, SAM (named after youngest brother, Sam) is ready to start shipping in December.

“We used SAM for a few months before deciding on making it into a product. We found out that although there were other mailbox alert systems on the market, none of them had cloud and smartphone integration for receiving alerts,” Alex Waclawik said. “That’s when we decided to pursue SAM as a product. We also did a lot of testing, especially for range, battery life and low-temperature performance.”

The development of SAM was partially aimed at reducing mail and package thefts.

“The original SAM prototype was just a simple receiver and transmitter, which made an audible alert in the home when mailbox activity occurred. Once we began developing the device, we realized the potential of not only mailbox notification, but also the ability to monitor potential package thefts,” Alex Waclawik said. “With that, we proceeded to integrate SAM with the internet and cloud computing. Users are able to receive mail notifications on their smartphone anywhere they have a cellular connection and can keep a log of the date and time of past mailbox activity for up to three months.”

Alex Waclawik, 18, has taken over as product manager, while dad, Bart, has stepped back to his “regular” job of running two other Carmel-based businesses. As for Selam, although she enjoyed the creativity of inventing a new product, Alex said she’s not as interested in the business side.

“My sister really likes science and invention aspects, and she helped with the design and look and feel of the device and also worked with my dad on the notification sounds selection that are included with SAM, but now she is busy with school. She’s a sophomore at Carmel High School and studying as she wants to go to college to work in the medical field,” he said.

SAM retails for $59 and is available at mailalert.us for pre-order. It will be available on Amazon in December. The app is free and can be downloaded from the App Store or Google Play Store. There are no subscription costs for smartphone notifications.