You are at:Home»Current in Carmel»Carmel Community»Family of stolen bulldog aims to assist others missing pets, fight for tougher sentences

For Christina Kiger, the sentence for the man who pleaded guilty to stealing her family’s bulldog falls short of justice.

But she understands that two years in a work release program and $4,280 in restitution is about as much as she could have hoped for in Indiana, a state with laws that that only consider the fair market value of an animal when it comes to theft. 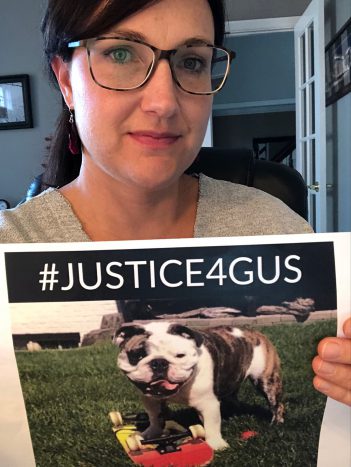 Christina Kiger displays a photo of Gus, who went missing from her Carmel home in October 2017. (Submitted photo)

“It’s treated as simply a dollar amount and not the loss of a family member,” said Kiger, who lives in Carmel with her husband and three daughters.

Gus, a three-year-old bulldog who knew how to skateboard, went missing from the Kiger family’s yard in October 2017. In April, police arrested Reid Albrecht, 22, who lives near the family, for the theft. He pleaded guilty in October but has remained quiet about what happened to Gus.

As part of the plea agreement, Albrecht is required to provide more information to police within 30 days about the incident and the dog’s whereabouts. For the Kiger family, the cleanup statement is the most important part of the deal, as it will provide answers to questions that have haunted them for more than a year.

“It gives us the knowledge behind what actually happened that day and the days after that,” Kiger said. “In addition, we will know if he sold him, if he’s still alive or the outcome of where Gus is.”

The Kigers know they will likely not get Gus back, but they plan to build his legacy by using their experience to help others going through similar situations. Kiger said she has already reached out to people she’s discovered online who are searching for missing pets to share her experience and provide tips and assistance.

She also plans to use the restitution money to support police K-9 units and give back to organizations that help locate lost or stolen pets.

The Gus is Missing Facebook page – created soon after the dog’s disappearance – has 3,500 followers, and with the story making national headlines Kiger wants to use her platform to make a difference.

“We have an opportunity, so we feel like our hearts are telling us we need to take that next step to do something,” she said.

Kiger also hopes to advocate for changes to Indiana law that would toughen the punishment for theft, abuse or neglect of animals. She said that if Gus, who was worth $3,000, had been a mutt, the theft would have likely been a misdemeanor because of the dog’s lesser monetary value and left her without much of a case.

“No dog breed is more important than another dog breed,” she said.

While the family still misses Gus, Kiger said the 13-month ordeal has made them stronger and connected them with supporters across the globe.