You are at:Home»Current in Carmel»Carmel Community»Carmel woman selected to visit Qatar in advance of nation hosting 2022 World Cup

Being a member of the Indiana Council on World Affairs provided Melissa Beuc with a special opportunity.

“Qatar was looking for grassroots ambassadors, so I was able to be selected as one of the ambassadors to go on this unique trip,” Beuc said. “We got to visit lots of different ministries to learn more about how the government works, the education, their vision for the future and the World Cup soccer that they are building the infrastructure for in 2022.”

The Carmel resident, who has her own marketing strategy practice company, visited Qatar for a week in October. Beuc was selected as one of 14 ambassadors by the World Affairs Council of America. 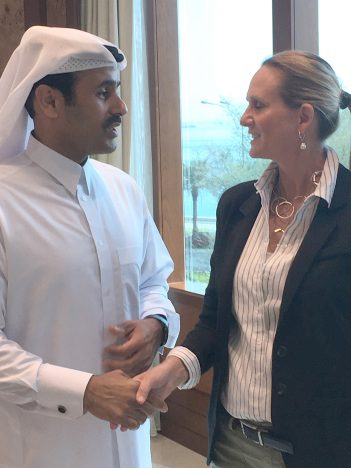 “We got to meet with a lot of top-level people within these organizations, such as the ministry of finance,” Beuc said. “They talked about how they are diversifying their economy.”

Beuc said the group met with the team organizing World Cup soccer and coordinating the construction. They also met an advisory council for the nation, which is a constitutional monarchy.

“They wanted an outreach program. One (reason) is to grow business and encourage people to consider Qatar for their business operations,” Beuc said. “They also want to promote World Cup soccer. They want people to come.”

All of the stadiums are in close proximity, and some will have a removable tier.

“They’re going to build seven stadiums, each one with a different, unique look to pay homage to a specific theme they have chosen,” Beuc said. “When they are done with some of the stadiums, they are going to take over the top-most level and donate that to some developing countries, so that they have stadiums. They have a warm and generous spirit.”

Beuc said the group was able to ask Qatar officials anything.

“They said, for example, ‘We knew we were getting a bad rap for the way we treated migrant workers who came in to do construction,’” Beuc said. “They’re sensitive to their reputation in the world. They’re taking steps to make sure that the worker community is taken care of. They’re small enough and have a small enough government that when they make a decision they can execute it and implement it throughout the country.”

A number of deaths have occurred during construction, often because of heat. In addition, there have been  numerous reports of long hours and poor working conditions, especially the first few years.