Guitar is a popular first choice for many who want to learn to play an instrument. Americana folk performer Kristin Rebecca learned to play guitar at age 13 and began taking voice lessons at 13.

“It was not something I expected to be,” Rebecca said. “I wanted to take up another instrument outside of studying voice. We went to a store in Minnesota where they sell Celtic harps. I saw it on display, plucked one of the strings and decided I wanted to learn to play it.” 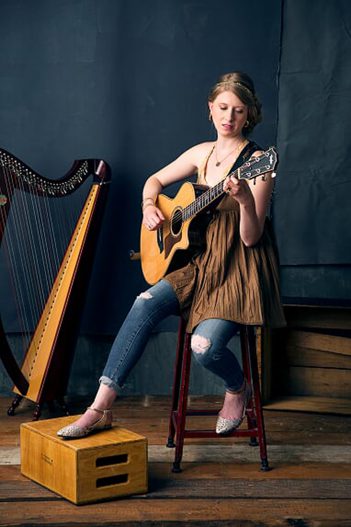 It took about two years for Rebecca to become comfortable with the technique involved in playing the Celtic harp. She now travels the U.S. playing guitar and harp and singing her own original songs.

“I like to describe my style as if Joan Baez and Ed Sheeran made a CD together,” Rebecca said. “I do a bit of traditional folk and a few covers people know, like ‘Country Road’ by John Denver, but a lot of my original work as well.”

“I’ll be playing both the harp and guitar,” Rebecca said. “I’ll be singing mostly original music off my newest album, ‘Tales, Trials, Truth.’ Also, because we’re going to be close to Christmas time, I’ll probably throw in my original Christmas song.”

Living in Maryland makes it difficult for Rebecca to choose venues in other states.

“I sometimes pick some stuff up from other artists that I know playing shows,” she said. “People pass big names back and forth. This one came up through other artists.”

Tickets are not required to attend the show but a $10 donation to Logan Street Sanctuary is suggested. For more, visit kristinrebecca.com.