You are at:Home»Current in Fishers»Fishers Cover Stories»A new hub: Group to build design center near Nickel Plate Trail and 106th Street in Fishers

A hub for entrepreneurship, design and creation soon will come to Fishers, thanks in part to a partnership between the City of Fishers and Hamilton Southeastern Schools. 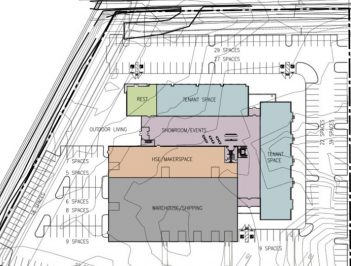 The 85,000-square-foot Hub and Spoke Design Center will include warehousing, a showroom and events space, tenant space, a makerspace and more.

The idea was sparked when Tucker attended the State of the Schools address in March and learned of a joint intitiative between the city and HSE schools to foster unique student education by partnering with local businesses.

“When he heard that, he had been working on a project with David Decker to create an opportunity for several business owners in the world of artisanry work and construction trades and wanted to create this place where entrepreneurs could teach young people all sorts of stuff,” Fadness said. “(HSE Supt. Allen) Bourff and I met with the Hub and Spoke folks, David and Travis, and some others and laid out our vision for the city and schools, and they laid out their vision for Hub and Spoke, and it seemed to make a whole lot of sense.”

Besides artisan and design entrepreneurs, Fadness hopes the makerspace will provide a unique educational opportunity for HSE students. Approximately 15,000 square feet of the Hub and Spoke Design Center will be designated to the makerspace area.

“Hopefully, we have a revolving door of students coming out and learning what the trades are like,” Fadness said. “Honestly, one of our goals is to get kids experiences in these different industries at a younger age to start inspiring curiosity, and frankly, start to find their purpose earlier in life.”

Decker said lack of skill in the trade industry is one of the drivers of the project.

“Some call it a crisis in our industry with our labor. There’s a lack of skill trade,” Decker said. “People currently skilled are getting older and reaching retirement age and not a whole lot of younger people are entering our trade to learn the skills. A big part of what we are trying to do is workforce development and entrepreneurship within the skill trades, which also then goes into helping kids find their purpose early and their passion early.”

Another goal of the Hub and Spoke Design Center is to help kids enter the workforce earlier. Decker said if someone attends college and doesn’t graduate, or the post-secondary education results in a large amount of debt, that student potentially may be further behind than a student who enters the workforce immediately after high school.

“There’s kind of been a stigma around design and construction,” Decker said. “It’s been preached for a long time, ‘Go to college,’ but a lot of kids go to college that haven’t graduated and have lots of debt.”

“We just want to do right by the kids or the adult, whoever it is,” he said. “If they decide they want to start a business, they’ve got this makerspace with all this machinery and tooling. They can do a lot of things they couldn’t do on their own because they don’t have the monetary investment to buy those things.”

Construction is scheduled to begin next spring with an estimated completion date for the end of 2019. 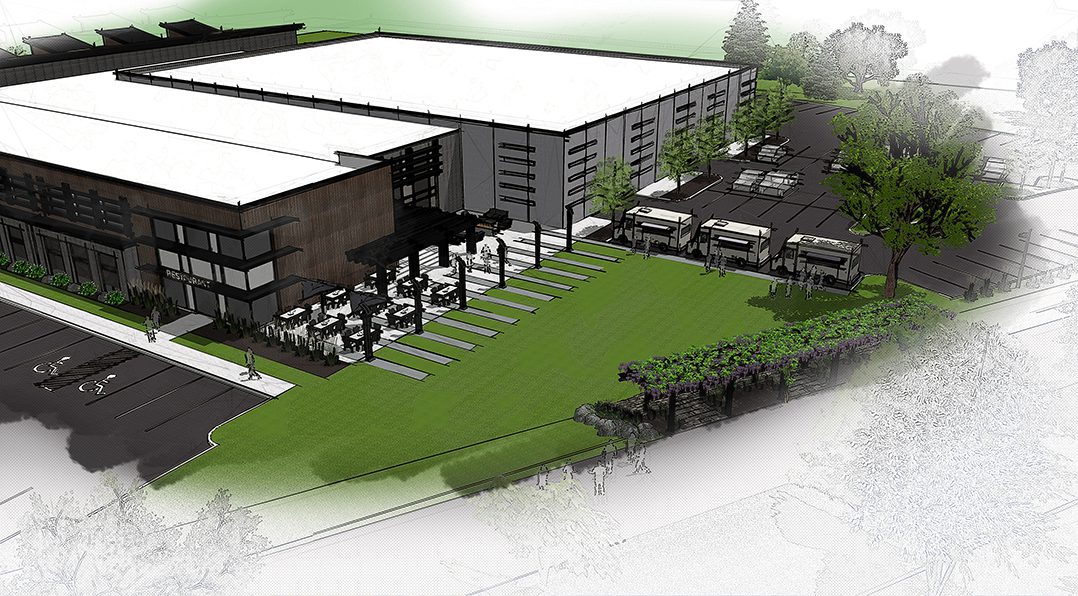 A rendering of what the Hub and Spoke Design Center may look like from a trail view.

“Ours is going to be geared around skill trades, plus mixing in some art and technology, so we really feel by bringing all that different expertise into one building, people will work together and rub shoulders,” Decker said. “There are going to be experts in there sharing ideas and inspiring each other. We truly think innovation is truly going to be amazing there (at the Hub and Spoke Design Center). There’s the makerspace in there, and that component is different than in the (Indiana Arts and Design Center).”

Decker said a unique aspect of the Hub and Spoke Design Center is its warehousing space.

“Everyone sees the need for (the project) and is fired up,” he said.