Eva Bublick is already hitting the Billboard charts and she hasn’t yet finished college.

The 2015 Carmel High School graduate’s song “America” with All Day Willis, whose real name is William MacKenna, peaked at No. 45 on Billboard’s Dance Club Songs chart for the week of Nov. 24. 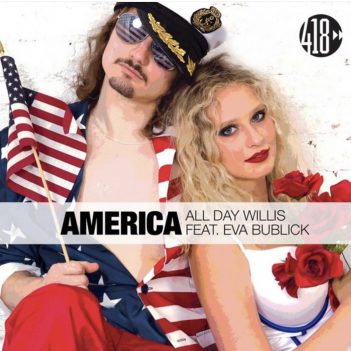 “It’s really cool,” Bublick said. “I’ve had people say, ‘Oh, I’ve heard your song,’ and I thought, that’s crazy, it really happened. All of sudden DJs were remixing my song since it was on dance label.”

Bublick is a senior acting major at Marymount Manhattan College.

“I’ve been going to open mics and clubs and singing since I’ve been in New York,” she said.

Bublick went to Premier Studios to record a demo for her mother. There, she met All Day Willis.

“He’s really good at the guitar and we had similar taste in music. We started talking and started making music,” Bublick said. “He’s very talented and a great producer and I was super lucky to work with him.”

Bublick said she and All Day Willis have made several songs in the last several months.

Bublick said a big group from the studio went to Woodstock, N.Y. during the summer.

“We went to a performance at Woodstock’s Lodge and we heard Joey Eppard play his song ‘In America’ with P-Funk,” Bublick said. “It was the night before Mountain Jam, which is a huge festival. George Clinton was playing with P-Fun the next night at Mountain Jam.”

Bublick said a friend from P-Funk introduced her to Eppard.

“He actually wrote the song after 9/11 and I heard it and really, really liked it,” Bublick said. “The song says in America we need a miracle and I was like, ‘Wow, that’s so relevant today.’ It’s transcended many, many years.”

Bublick said it was cool to make a song about America in such a politically charged time that isn’t really political at all.

“I really loved the message of the song,” Bublick said.

Eppard helped with the recording by playing guitar.

“It was fun collaborating with these really fun and seasoned artists,” she said.

Bublick is working on new project with guitarist Binky Griptite, an original manager of The Dap-Kings, who left in 2018. Griptite also was Amy Winehouse’s guitarist.

“With the 50th anniversary of Woodstock coming, we are talking about getting a band together and playing for that,” Bublick said. “It’s like working with a living legend.”

Bublick describes her musical taste as 1960s soul with a modern twist.

“Music like Janis Joplin, the Doors and Cher from Sonny,” she said.

She also has some modern influences like Cigarettes After Sex, Daughter, Demi Lovato and Portugal. The Man.

“The music industry is crazy. You never know what is coming next, but you just have to do what is in your heart and in your soul,” she said.

“One memory that stands out was the year after she was in a Summer Stock Stage production of the musical, “Hair,’” Peterson said. “She really embraced that production and would often sing or talk about that show. Her wardrobe even took on a certain hippie vibe. I’m not surprised that she’s being successful in a recording career. She’s always had a great singing voice. She was determined to follow her acting and singing career in New York.”

Bublick has appeared in small independent films, including “Hell Night: The Summoning.”