You are at:Home»Current in Carmel»Carmel Business Local»The National Bank of Indianapolis celebrates 25 years

With The National Bank of Indianapolis celebrating its 25th anniversary in December, bank officials wanted to give something back to the community.

The National Bank of Indianapolis has always been focused on partnering with charitable organizations in the Greater Indianapolis area, Senior Vice President and Chief Market Development Officer Ann Merkel said. 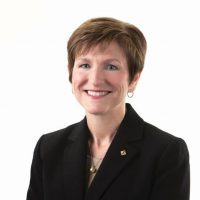 “We felt it would be very appropriate and part of our overall mission to make it possible for our employees to designate a $100 gift to the local nonprofit organization of their choice,” Merkel said. “So many of our employees are engaged in volunteering already that we felt it would be great for them to know they had a paid day they could use to either volunteer at a new organization or expand their service to their charity of choice. Both of those were very popular with our employees. We’ve had an overwhelming response.”

Merkel said many employees have formed groups to volunteer and many team projects have been completed.

“It’s been a great way to celebrate,” Merkel said.

Employees have had from August until the end of December to do the volunteer day and designate the charity of their choice. The response to the day of volunteering has been so positive that it might become something the bank offers on an annual basis, Merkel said.

The bank has a total number of 340 employees in the headquarters and 13 banking locations, including five in Carmel.

A group of 18 people from Indianapolis launched the community bank in December 1993. It is now the largest locally owned bank in the Indianapolis area and one of the 350 largest in the nation.

“The National Bank of Indianapolis was founded with the idea of providing a very high level of personalized service to our clients,” Merkel said. “We are committed to our local ownership because that really allows us the flexibility to deliver on our mission because we’re not answering to Wall Street. We are focused on serving our local clients as well as being able to return a very large percentage of our profits back to the community. On an annual basis, we provide direct financial support to over 250 nonprofit organizations here in greater Indianapolis.”

Merkel said all the growth during the last 25 years has been organic.

“We’ve not acquired any organization, any other banks, so our focus is to continue to grow our organization organically and to remain committed to the mission that has brought us from 18 employees and about $14 million in assets in 1993 to over 300 employees today and over $2 billion in assets,” Merkel said.