The Town of Zionsville is on a path of economic growth that it plans to continue in 2019, including a focus on filling positions at growing companies and linking businesses to resources. Town officials continue to work on connecting the Big 4 Trail and improving roads and facilities to support school and population growth.

The Big 4 Trail has been the talk of the town for several years, along with ongoing countywide plans to connect the trail.

According to Zionsville Parks Dept. Director Matt Dickey, trails have been the top priority in the last three cycles of the parks department five-year master plan.

The Boone County Trail Committee conducted a summit Nov. 13 to discuss the future expansion of the Big 4 Trail and its connection between Zionsville, Whitestown, Lebanon and Thorntown.

At the meeting, Cory Whitesell, director of planning at HWC Engineering, said a study showed trails ranked No. 2 among 18 community amenities as reasons to choose specific locations when buying property.

“People want to live near trails because the trails can be interesting and aesthetically pleasing,” Whitesell said. “They provide a way to connect community members and promote health and fitness.”

The Big Four Railroad was a historical railway that traveled through the midwest until 1930. Zionsville was the first to develop a trail along the rail corridor in the 1990s. Various sections have been completed, but movement toward the bigger goal of linking all sections has increased since 2016.

Zionsville officials are making progress on extending the trail south to Zionsville Road and north to 800 East. After reaching 800 East, there will be a half-mile remaining to connect with Whitestown.

“We are working to acquire land to expand the rail trails in all directions,” Dickey said. “There is 1 mile total (left) to get to 96th Street. We’ve already garnered some of those pieces through donation.”

Zionsville also plans to repave roadways in the new year. With a $2.25 million investment, 3.3 miles of Zionsville roads were resurfaced in 2018 and an additional 3.5 miles of roads will be worked on in the spring of 2019. 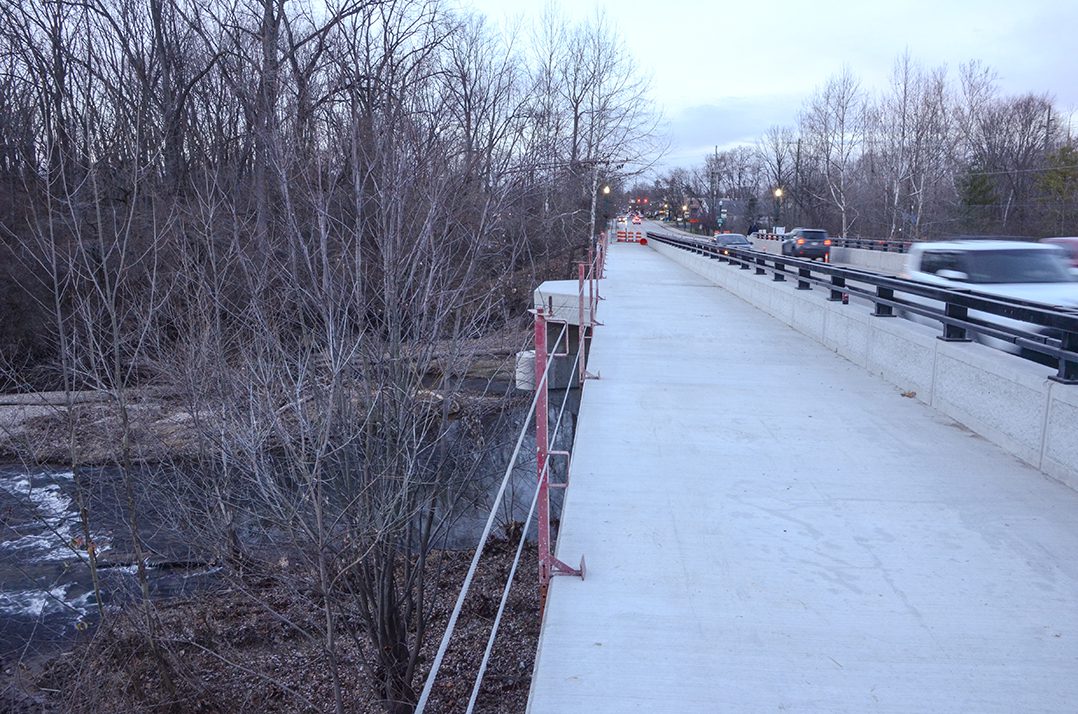 In 2019, improvement of Zionsville Road will continue south toward 96th Street. The town recently completed the Zionsville Road Bridge, which included the addition of two 10-foot pedestrian pathways on either side of the bridge.

With the loss of Zionsville resident and Boone County Deputy Jacob Pickett in March, a double murder-suicide in September and a shooting at Quail Run in October, Zionsville Police Dept. and the Boone County Sheriff’s Office experienced a trying year.

“Zionsville is diversifying rapidly,” Chief of Police Robert Knox said at the Nov. 28 Mayor’s Night In. “We are growing our police department and are increasing the size of our police force.”

According to the Boone County Economic Development Corp., 16 companies, including Royal Interpack Midwest and Rockwell Automation Inc. in Whitestown, chose to expand or locate in Boone County in 2018, with plans to hire more than 1,300 people and invest more than $279 million in the community during the next few years.

“We are pleased that the amount of new capital investment we brought to Boone County has increased by nearly 45 percent ($86 million) from last year,” Boone EDC Executive Director Molly Whitehead said.

According to Mayor Tim Haak, more than seven new businesses opened in Zionsville in 2018 and at least four expanded.

With job fairs, a new manufacturing alliance, wage and benefits surveys and more, Boone EDC aims to connect businesses with potential employees and help retain the employees they have.

“Creating a group like the Boone County Manufacturing Alliance, we hope to make connections with other manufacturing groups,” Whitehead said. “(The businesses) will be able to have a deeper understanding of what their neighbors are doing, which helps problem-solve.”

Construction will begin in early 2019 on the new Zion Nature Center, which will house the nature center and parks department headquarters. It will be north of the Zionsville High School Baseball and Softball Complex on 875 E. and will include access to the Big 4 Rail Trail, restrooms and additional storage for the parks department.

The Zionsville Plan Commission approved several new projects this year, including the expansion of Fire Dept. Station 92, development of the Holliday Farms community, building of a Zionsville Community Schools clinic and more.

The new ZCS facility will house its St. Vincent clinic for employees and a student services center, freeing up space at other ZCS facilities, which will be necessary to meet increasing enrollment rates. Construction is set to begin soon and the completion goal is summer 2019.