You are at:Home»Current in Geist»Geist Community»What’s next?: 2019 to be a busy year for Geist-area cities and towns

The new year will be a busy one for Geist-area towns and cities, with developments, subdivisions, a waterfront park and more planned to come.

Meyer Plastics will open in the spring of 2019 at the corner of 59th Street and Sunnyside Road. Mayor Steve Collier said the development is an example of an ideal public private/partnership between the City of Lawrence and Meyer Plastics.

Another major development launching in the summer is the Record Street project and the trades district.

“That essentially is the area just north of Pendleton Pike. We have Mission Mechanical and several other developments, both tech and light industrial, that are moving into that trades district,” Collier said. “The overall goal of it is to essentially get a district that will be designed to train people throughout central Indiana, not just Lawrence, to take today’s jobs.”

A partnership will be established between the City of Lawrence, the McKenzie Center and Lawrence Township schools to position future employees for new developments in that area,.

“Essentially, we will be training individuals to take high-paying jobs immediately after graduation,” Collier said. “This is not a trade school, it’s not a vocational school. This will be on-the-job training to be able to prepare them for jobs that are increasingly demanding.”

Construction on the city’s new police headquarters at 5140 Post Rd. is on schedule to be complete before the end of 2019. When the police department moves out of the government center building on 59th Street, Collier said the building will be renovated because one-third of it will be vacant. Utility office employees are expected to move into the building.

The new will usher in more growth in the Town of McCordsville.

“We will continue to work on the Town Center Master Plan in 2019 as well,” Galbraith stated in an email to Current. “We expect Geist Woods Estates to build-out and (be) complete in 2019.  Woodhaven and Villages will continue to be active, with each having approximately 100 remaining lots.” 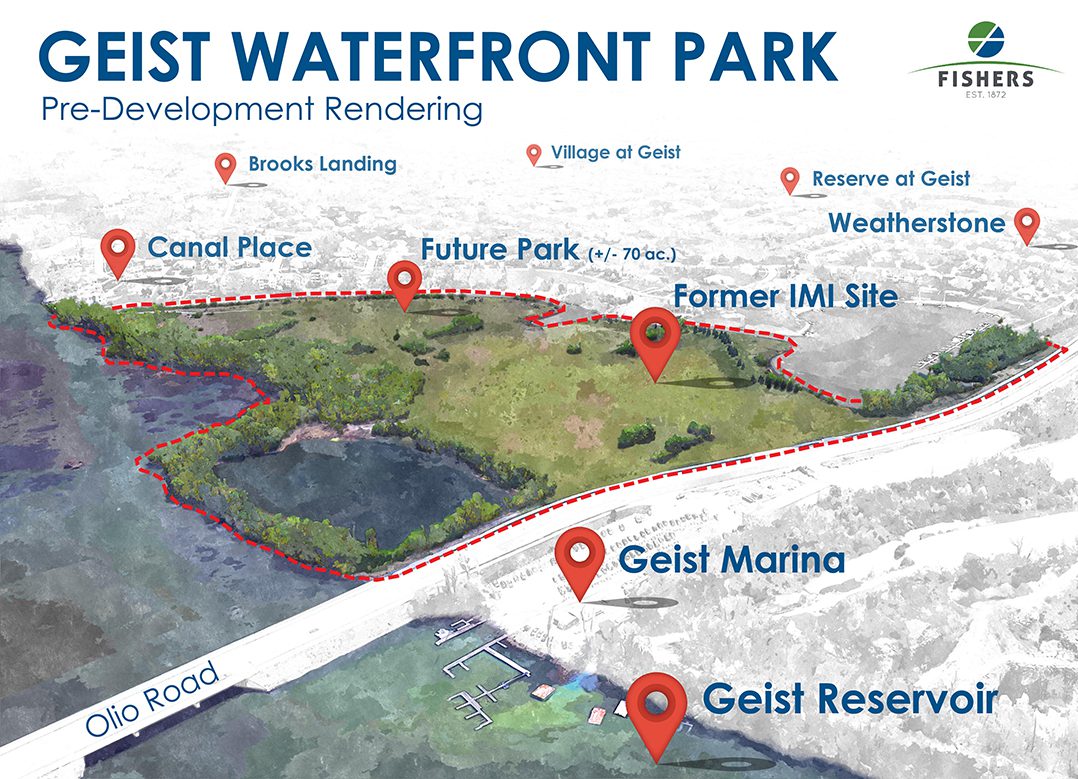 The City of Fishers will continue to develop plans for the Geist Waterfront Park in 2019. (Submitted image)

Fishers Mayor Scott Fadness said the AgriPark, an urban farm with crop production and immersive learning opportunities at 113th Street and Florida Road, is expected to be further developed in 2019. More announcements are anticipated regarding the Geist Waterfront Park development on Geist Reservoir at 111th Street and Olio Road.

“This year there were a lot of announcements about ideas like the Geist Waterfront Park, the AgriPark, further discussion on State Road 37, all these things were announced,” Fadness said. “Next year, we hope to be really in the middle of all of it.  It’s going to be a really busy year.”

The towns of Fortville and Greenfield recently received a Stellar Communities designation from the state of Indiana. The designation allocates funding in certain areas such as transportation and housing to be split within the region. One of the Town of Fortville’s plans is to use the funds to renovate Main Street. The renovation includes the installing more lighting, crosswalks and landscapes. Funds also will go to build a trail from Fortville Pike and Garden Street to the Mt. Vernon School District complex. The Main Street corridor project will begin in 2019, with the trail project set to begin in 2020.