When director Rocky Walls set out to make the documentary “Finding Hygge,” his first hurdle was to define the term “hygge.”

Seems the Danish word connoting happiness means something different to everybody.

“One of the fun challenges for this film is that hygge doesn’t have a very good English translation and it means different things to different people,” said Walls, co-founder of Fishers-based 12 Star Media. “It’s not a specific thing you can do or buy or manufacture.” 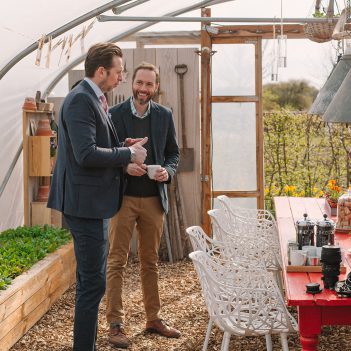 A Fishers resident, Walls and 12 Stars Media co-founder Zach Downs, also of Fishers, made the 90-minute documentary to celebrate the 10-year anniversary of their video production company. They chose the topic of hygge (pronounced hoo-guh) after visiting Copenhagen, Denmark three years ago.

Walls and Downs, who are co-executive producers, announced the project in April 2017. The film made its world premiere in March 2018 at the Sonoma International Film Festival in Sonoma, Calif. It was played at festivals throughout 2018 and was released on Vimeo On Demand in the U.S. and Canada in November 2018.

Locally, “Finding Hygge” will be shown Jan. 26 from 1 to 4 p.m. at the Hamilton East Public Library, 5 Municipal Dr., Fishers. The filmmakers will discuss the project following the screening. Light refreshments will be served and guests can enter a drawing for a hygge basket — which again begs the question: What is hygge?

Broadly defined, hygge is a state of happiness, comfort, coziness, joy, contentment in the moment. Narrowly defined, there is no English language parallel. But generally defined, it’s finding happiness in whatever makes you happy – typically in simple pleasures, such as spending time with friends, food, quiet time, etc.

“It’s a mentality shift,” Walls said. “It’s a paradox, though, because while it takes effort to get into the right mindset, at the same time it requires no effort at all. Most people have it, and once we know what to look for, we see it in ourselves. The problem is that we cover it up and cloud it with other things that don’t matter and don’t make us happy.”

Walls and Downs discovered the concept of hygge, which has spawned international interest in recent years, upon their visit to Denmark. They decided exploring the topic in film would be the ideal way to commemorate the 10th anniversary of 12 Stars Media, a full-service video production company that provides strategy, pre-production, production, editing, 2-D and 3-D animation and color-grading services to corporations and nonprofits.

“We noticed major cultural differences between Denmark and the United States,” Walls said. “The pace of life appeared much slower and more relaxed. How Danes spent their time together was a marked difference from Americans.”

“Finding Hygge,” shot on a $250,000 production budget, was filmed in Denmark, England, Canada and the U.S. It will be available on DVD and Blu-ray early this year. The Jan. 26 library event is free and open to the public. Registration isn’t required.

“It’s no coincidence that hygge has exploded in popularity amidst growing division and distrust in the world,” Walls said. “People are looking for ways to be happier, but the Danish word and its definition are more complicated than it seems. For those who seek happiness, we hope our exploratory documentary helps each individual viewer discover their own true meaning of hygge and how to find it for themselves.”

For more on the documentary, visit findinghyggefilm.com.