You are at:Home»Current in Geist»Geist Community»Aktion Club forms in Lawrence, gives individuals with disabilities more opportunities

Dave Humes helped start the Aktion Club in the Geist and Fishers area through Kiwanis. When he moved his business to Lawrence, he wanted the Lawrence Kiwanis Club to offer those opportunities as well.

An Aktion Club is a branch of the Kiwanis Club and is the only service club for individuals with disabilities. 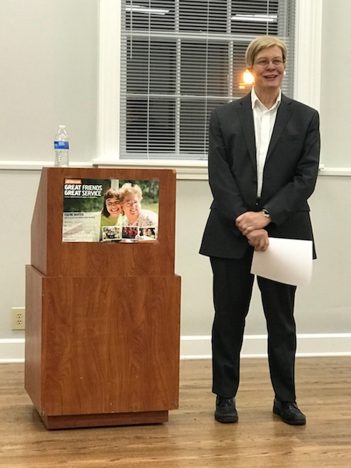 “I had gotten really excited about working with the young adults in the Geist/Fishers area. I saw how rewarding that could be, so I volunteered to start one in Lawrence,” Humes said.

The Aktion Club is for individuals 18 or older. Humes said in addition to providing an avenue for service, the club allows members to interact with others as well.

“They often feel displaced after they graduate from high school becasue a lot of their friends go off to college and they feel a little isolated,” Humes said.

The Sterrett Center on Otis Avenue offered its facility to the Lawrence Aktion Club for its meetings. The next meeting is 6:30 p.m. Feb. 14 at the Sterrett Center, 8950 Otis Ave., Lawrence.

“It was really an enthusiastic group. They got very excited about it,” Humes said.

Some of the events the group discussed included a prom, a Halloween event and an all-you-can-eat-pizza night at Jockamo Upper Crust Pizza, among other activities.

“There’s a social component. It’s not just a service club,” Humes said. “They will have to pick a charity they will donate to and develop fundraising activities. The only requirement is it be somewhere in the Lawrence area.”

The paperwork to charter the Lawrence Aktion Club has been submitted, and the Lawrence Kiwanis Club will pay for the charter and the beginning membership fees. When it reaches its second year, the Kiwanis Club also will pay the annual dues, but the third year it will be up to the members. Annual dues are $8.

“If they can’t afford the $8 a year, we will certainly pay that for them as well,” Humes said. “We wanted them to feel like they had a financial investment in their own club.”

If someone is interested in joining the Lawrence Aktion Club, email Humes at davehumes@comcast.net.