You are at:Home»Current in Zionsville»Zionsville Cover Stories»Growth on the horizon: ZCS could construct sixth elementary school by 2022

A growing population in Boone County has meant an increased number of students in the Zionsville Community Schools system. That growth could result in the construction of a sixth elementary school.

At a January school board meeting, ZCS Supt. Scott Robison suggested a single redistricting and expansion by the winter/spring of 2022 to meet growing enrollment. It was noted Union Elementary and Boone Meadow Elementary will exceed capacity in the near future.

“This, of course, depends upon the many things that must occur en route to such a school opening. Our demographic study is from a provider that has done so well for us in the past 20 years,” Robison said. “We are confident in their prediction of just over 200 net enrollment increase each year for the coming decade. As per redistricting, we believe that it is best for students to transition them as few times as possible during their grade spans of school experience.”

Robison said meetings were conducted with approximately 550 parents at the five elementary campuses in the spring of 2018 on the possibility of redistricting. ZCS has not done redistricting in several years, Robison said.

“Parents expressed gratitude for our stance that one round of redistricting would be best, if we were able to succeed in getting the new elementary facility online in the time frame we’re recommending,” he said. “Redistricting is always a difficult subject for a school community.”

The enrollment change from 2017 to 2018 saw an increase of 27 students in pre-K, 109 students in kindergarten through fourth grade, seven students in fifth through eighth grade and 65 students in ninth through 12th grade.

The numbers are a reflection of community growth. The ZCS district has accounted for more than 70 percent of Boone County’s population growth so far this decade.

A July 2018 report showed roughly 70 percent of all single-family development in recent years has occurred in the Boone Meadow and Union Elementary districts. ZCS will implement the staffing strategy that has worked for the district during the last several decades to help maintain desired class sizes at each level.

“This practice will include recommending the hiring of additional staff as financial resources and space limitations allow,” Robison said. “We are not strangers to the word growth in ZCS, as student growth is the crux of our mission. However, enrollment growth is the highest on our radar that it can get because of our ongoing monitoring of facilities capacities. We know we must certainly build new school space.”

Fifth-grade humanities teacher Candace Hons has up to 29 students in her Zionsville Middle School classes and provides collaborative work spaces with alternative seating. A first-year ZMS teacher, Hons previously taught at Eagle Elementary, where her class numbers were in the mid-20s.

“It’s nice to work for a school district who sees where we are and where we are headed,” she said. “I have 30 desks in a collaborative space setting. I believe in flexible seating, so they have other options. Some like their individual space and some like a more collaborative setting.”

As for Zionsville Community High School, Robison said an expansion is likely to be recommended to the school board sometime this winter or spring 2020 and would raise enrollment capacity at ZCHS to a little more than 3,000 students.

“We do not see the high school being able to make it to 2026 without an expansion that we are predicted to be best implemented for the 2022-2023 timeframe,” he said. “The discussion about whether or not to do yet another expansion or to consider the one versus two high schools question again could wait until the 2026 time frame. An important consideration for this study and planning we have been doing is to recommend phasing that gives future school boards the opportunity to consider variables (funding, enrollment growth rate, etc.) in play when they are the decision makers without having a variety of options overly foreclosed upon by what we do with the possible 2022-2023 expansions.” 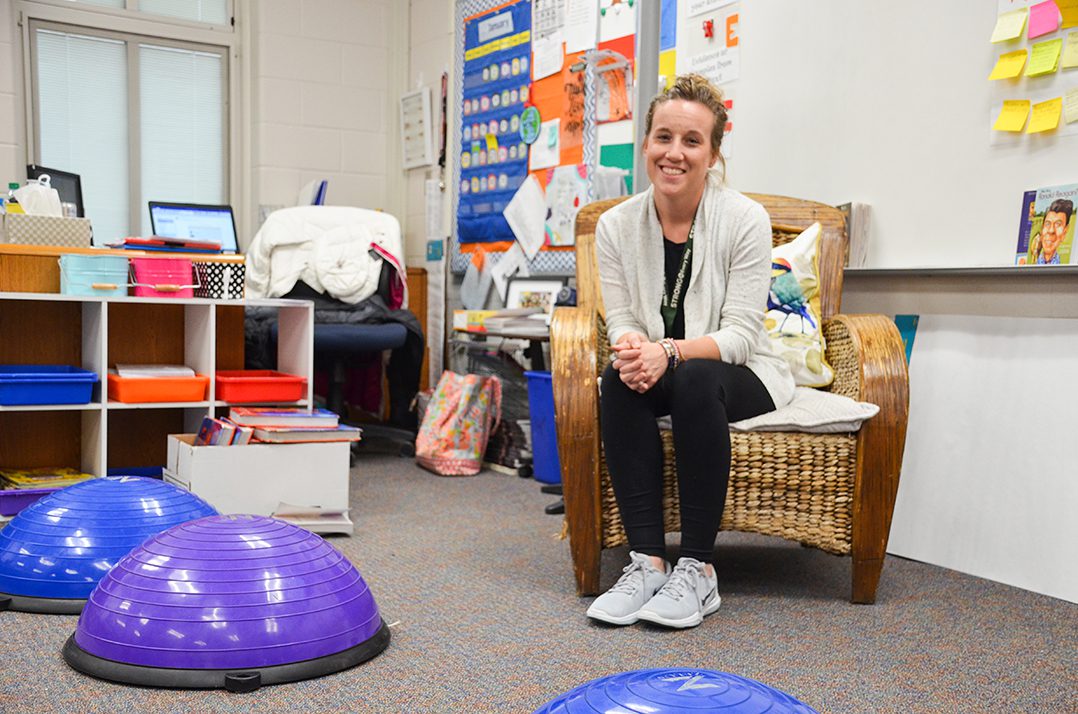 Fifth-grade humanities teacher Candace Hons sits at the head of her Zionsville Middle School classroom. Hons has 26 to 29 students in her classes and provides collaborative work spaces with alternative seating. (Photo by Sara Baldwin Schatz)