You are at:Home»Current in Carmel»Carmel Community»Carmel mom determined to beat cancer for daughter

Michel Perusse knows what it’s like to be motherless at an early age. She doesn’t want that fate for her own teenage daughter. 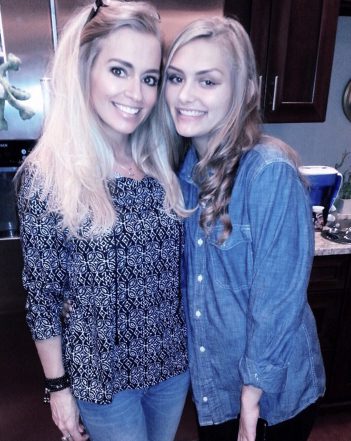 The 42-year-old Carmel resident learned she had an inoperable brain stem tumor in March 2015. For most of the four years, the resulting migraines have been constant.

“It’s like having a knife in your head 24/7, and I feel like someone is twisting it,” she said. ”I have seizures and bouts of vertigo. I suffer from horrible brain aphasia and several TIAs (mini-strokes). Through four years, I went through all those things on a regular basis.”

Then, in October 2018, she learned the brain stem glioma is malignant. The average survival rate for that form of brain cancer with normal treatment is 15 to 18 months.

Perusse, who isn’t able to work full time because of the condition, is seeking to raise funds through a GoFundMe page that a friend started to have immunotherapy treatment at a clinic in Mexico, Germany and Belgium.

“I have to fight to be there for my daughter, Zoë,” said Perusse, whose mother died suddenly when she was 9. “I don’t think anyone should lose their parent at such a young age. I don’t want this to be her fate. She won’t have anyone to turn to. She has friends, but she’s 15. These years are critical in me helping guide her. She is my reason for living.”

Zoë, a Carmel High School sophomore, said she is proud of her mother’s attitude.

“She’s always stayed positive, even on the worst days,” said Zoë, whose father is not involved in her life. “I want to take (the pain) all away and I know I can’t. Even when she’s all in pain, she makes sure I’m happy. It breaks my heart that I can’t do anything to help her. I love her so much and it would break me to lose her. I can’t go through that.”

Perusse said the non-invasive treatment involves a dendritic cell vaccine that is cultured by using her own blood to boost her immune system to eliminate/stabilize the tumor.

After four weeks to get the tumor stable, the vaccine is administrated four more times six to eight weeks apart, so the travel time is costly, compounded by the lack of income.

“Clinics have patients with my diagnosis still alive eight years later, and I am in direct contact with many who are doing incredibly well with multiple stable scans,” Perusse said. “When it works, it works exceptionally well.”

FDA restricts its use in the U.S. because it still considers it experimental, but Perusse said she is on the wait list for trials at Duke University and the Neuro-Oncology Center at UCLA.

“The longer the wait, the less I will be a candidate for it,” she said. “I feel like the clock is ticking unless a miracle from God occurs.”

“My mindset is, I’m not going to let this kill me,” she said. “I do believe the power of faith is real. If I get this treatment, I can potentially live for many more years.”