You are at:Home»Current in Zionsville»Zionsville Community»Lawson to serve as interim town manager through 2019

The Whitestown Town Council, by a unanimous vote, appointed Dept. of Public Works Director Jason Lawson as interim town manager. He will serve until after the November 2020 election, when the council will select a permanent town manager. 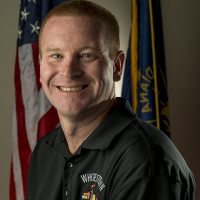 “Jason has always served as the second-in-command, so to speak, during Dax’s absence when Dax was on vacation or traveling,” said Tanya Sumner, director of public relationships for the Town of Whitestown. “Jason has worked for the Town of Whitestown for the last 11 years, where he is the director of our Dept. of Public Works. He has always been highly involved in the growth of the town and worked closely with developers alongside Dax during our booming growth phase, so he is a logical choice to slide right in to the interim town manager role.”

Sumner said although it is up to the newly elected council to decide the permanent replacement, she believes Lawson would be an ideal choice.

“Even in the short time he’s been in this new role, Jason has already done a great job of showing the town staff that he’s a natural leader and rallying us together to work toward having another great, prosperous year,” Sumner said.

Lawson lives in Brownsburg, where he has resided since he was hired in Whitestown 11 years ago. He has continued to live there because his children attended Brownsburg schools at the time of his hiring. Residency is not required for the town manager position. Norton was a Zionsville resident.

“We believe that Whitestown’s development will continue seamlessly under Jason’s leadership. It’s been a seamless transition already, since Jason and other department heads already worked very closely with Dax on our economic development projects and other initiatives,” Sumner said. “Jason is already up to speed and has jumped right into the role of town manager with no hiccups or hesitation.

“Our goal is that 2019 will be another terrific year for our vibrant and growing community.”