Senior Christian William, who has cerebral palsy, enrolled a Lawrence Central her sophomore year, arriving in a manual wheelchair she had used since second grade. Someone had to push the wheelchair wherever she went.

Her junior year, her father found an electric wheelchair at a garage sale, and Williams was able to use that. However, she returned to school her senior year in the manual wheelchair because the batteries failed in the electric one and its seatbelt was shredded.

Lawrence Central teacher Deb Dufek launched a GoFundMe to raise money for a battery charger for the electric chair so Williams could continue using it. When teacher Andy McClain heard about the effort, he contacted one of his former students, Grant Klinedinst, a Zionsville resident, who works as a rehab product specialist at Quantum Rehab.

“I saw the schoolwide email about the wheelchair and thought of Grant. He was a former baseball player of mine and (wheelchairs are) his expertise nowadays, so I reached out,” McClain said. “He showed a tremendous act of servant leadership and took the bull by the horns here.”

“I asked, ‘Can I please just come see her’ to see more of the situation,” Klinedinst said. “I felt like there was more that can be done, and when I saw her and what she was in, I was grateful for everybody what they did here to help her out, but our company is looking to really drive more power into kids to make them more independent (through powered wheelchairs), so I saw this as an opportunity that she could benefit from.”

Klinedinst asked Williams if she would be interested in participating in a case study so that  Quantum Rehab could use her story to educate clinicians across the nation. She agreed.

After the GoFundMe was established to pay for new batteries or a charger for her old electric wheelchair, Williams wound up in a new powered wheelchair from Quantum Rehab. The chair normally costs $20,000 — a cost that was waived because of her participation in the case study.

“It was the perfect storm for us,” Klinedinst said. “The company was willing to let her have a chair and document her experience.”

Williams began using the chair around Thanksgiving in 2018. She only uses it in school because there is no vehicle to transport the chair home. She uses her manual wheelchair from second grade at home.

“I just like (the power wheelchair) because I can do more when I usually couldn’t do it in my old wheelchair,” Williams said.

Williams often experienced back pain with her old wheelchair, but she is pain free in the  Quantum Rehab chair.

Williams especially likes the eye-level feature on the Quantum Rehab chair, which allows her to raise up to see the food in the lunchroom, meet people at eye level or see herself in the bathroom mirror.

Klinedinst said although the Quantum Rehab chair is a better fit for her right now, the ultimate goal is to get Williams a chair custom-made for her body. 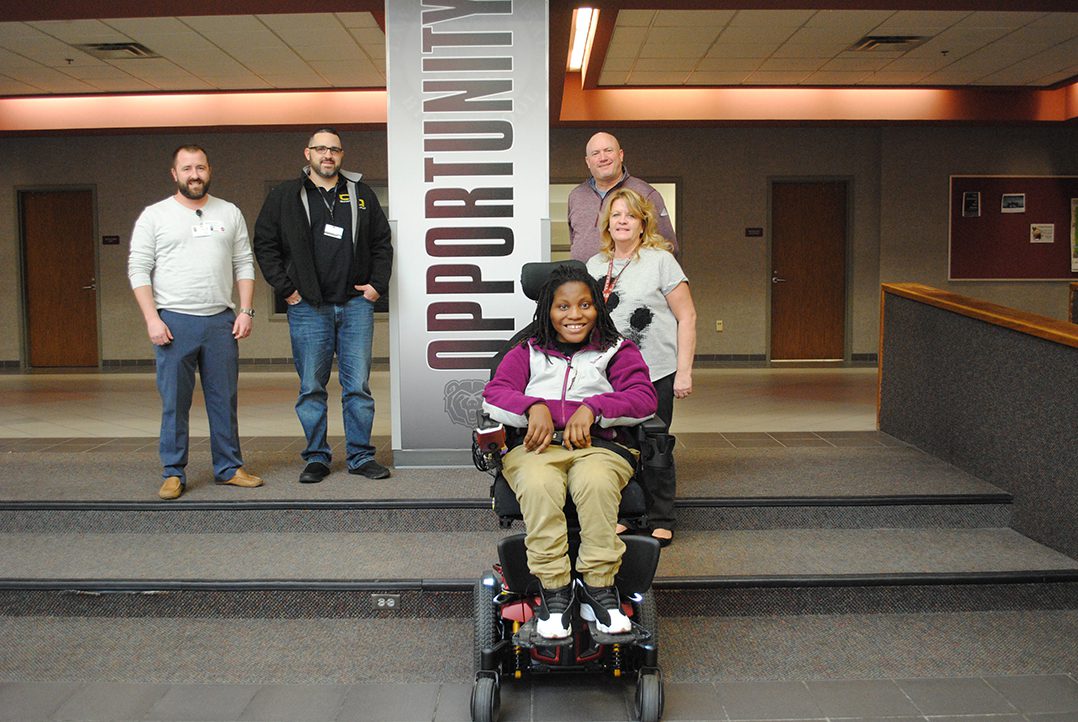 From left, J.B. Radabaugh, Grant Klinedinst, Andy McClain and Deb Dufek helped Christian Williams, center, be a part of a case study where she was placed in a power wheelchair without having to pay its $20,000 price tag.

Quantum Rehab clinical education manager J.B. Radabaugh, Westfield, is working on the presentation for Christian Williams’ case study. He’s planning on using Williams as a keynote during his presentation, which will be ready in the spring.

“The goal is really to help therapists and physicians and caregivers to get past the barriers of mobility,” Radabaugh said. “A lot of times, people think with a power chair, they’re so heavy they’ll never be able to use it, or they don’t have the mental or physical capacity to, but it’s allowing individuals significant social growth and cognition by having the ability to do what they want to do when they want to do it, which is making them more independent.”