You are at:Home»Current in Fishers»Fishers Community»Day to oppose Fadness in Fishers mayoral race

Fishers resident and Save the Nickel Plate railroad activist Logan Day filed as a Republican candidate for mayor on Feb. 8, the last day to file for the May primary elections.

Day formed an exploratory committee in January and determined he had enough support and campaign funds to challenge incumbent Republican Scott Fadness. 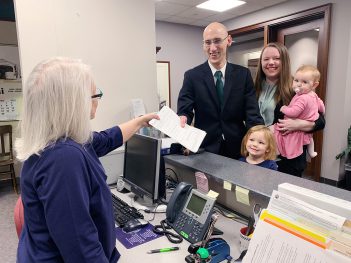 Fishers resident Logan Day files as a Republican candidate in the Fishers mayoral race with his daughters, Adeline and Isabelle, and wife, Kathleen, Feb. 8. (Submitted photo)

“It is my greatest hope to serve the residents of Fishers as a conduit of their needs and desires directly in the administration,” Day stated. “I’m so excited to continue sharing my vision and work with citizens to build a future for Fishers together.”

If elected, Day will call for more transparency and suitable spending. His platform also includes more communication and clarity about the city’s contracting process with taxpayer money.

“Being open and listening with the people you’re representing should be implemented at every level,” Day stated. “I want to hear directly from the people about their concerns and perspective on the direction of their city. These meetings will continue after I am elected to keep me grounded in what matters most — the people.”

To accomplish that mission, Day said he plans to be at The Original Pancake House, 8395 E. 116th St., from 7:30 to 10 a.m. every Wednesday. Day said he hopes voters will come and meet with him on a regular basis.

After he filed, Day also created a video announcing his candidacy in American Sign Language for the deaf community.