You are at:Home»Current in Zionsville»Zionsville Cover Stories»Staying in touch: Zionsville resident a Riley Champion, keeps up with doctors who saved his life

Zionsville Community High School freshman Aiden Hunter does just that with Yuknis. Even before he was nominated by Yuknis and selected as a 2019 Riley Champion, Hunter and his family participated in several fundraisers and events for critical care research at Riley Hospital for Children.

Yuknis, a Riley pediatric critical care physician, nominated Hunter partially because of his continued involvement with the hospital after he recovered from a seroius illness. Hunter was a Riley Hospital for Children patient in  March 2016 when he contracted influenza and bacterial pneumonia.

“The one-two punch of pneumonia he had on top of his influenza sort of sent his body into inflammatory overload, would be the way I would describe it,” said Yuknis, who treated Hunter. “His immune system was so revved up fighting his infections and reacted so strongly it started causing all sorts of collateral damage in his body.”

As a result, Hunter’s body began to shut down and multiple organs began to fail. He spent three weeks in the ICU.

“He overcame an incredible illnes. He was very, very sick when he came to the hospital and had a remarkable recovery,” Yuknis said on why he nominated Hunter to be a Riley Champion. “He recovered really without long-term effects from something lots and lots of people don’t get better from. Then, on top of that, he was always back or around when we were doing ICU-specific events. Between where he came from and how good of a kid he is, how good his family is and how gracious they have been with his time, from a selfish standpoint, we really love seeing kids who get better (come see us) because we don’t get a chance to see our patients always when they get better.”

As a 2019 Riley Champion, Hunter has met with the other champions and shared his story of recovery. The champions were introduced at the November 2018 Riley Children’s Foundation Luncheon, where they launched the year-long champions ambassadorships.

In addition to fundraising for the ICU, Hunter also helps boost the morale of the health team at IU North.

“It is easier to be able to help when you know that you’re helping them get and raise money for (research) and you can help more kids,” Hunter said.

Hunter’s mom, Carly Anderson, said it’s important that her family give back to Riley.

“I’m glad we still get to communicate (with Riley) because (they) were with us at probably what’s going to be the worst point in our lives, and to be able to share the good days with (them) and not just the horror we went through, it’s a blessing to get to have that opportunity and also to give back,” Anderson said. “There’s kids that don’t get to leave (the ICU), and parents that don’t get to have those experiences with their kids after the fact, and I think you guys (at Riley), with everything you went through, you deserve to get to be part of the rest of his story and not just the rough parts.” 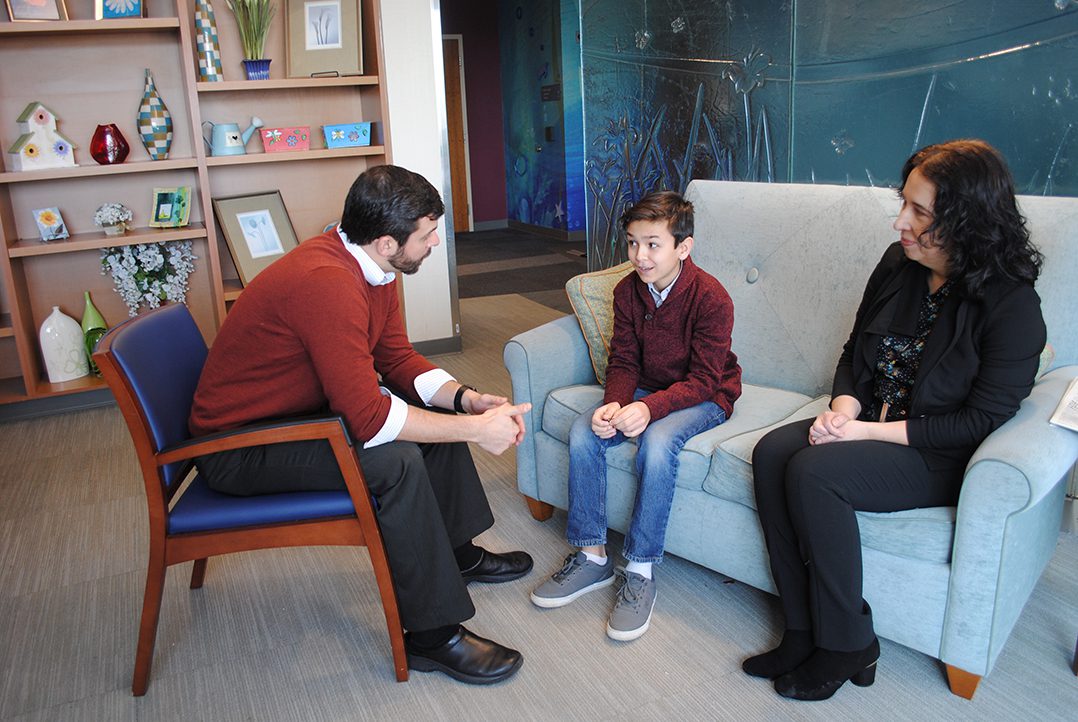 Dr. Matt Yuknis, left, and Dr. Mara Nitu speak with Aiden Hunter, center, about his time as a 2019 Riley Champion.

Hunter’s experience in the ICU

Doctors put Aiden Hunter in a medically-induced coma when he fell extremely ill due to influenza and a bacterial pneumonia. He doesn’t remember much of his three-week stay at the hospital, but his mom, Carly Anderson, recalls it well.

“When he came out of it, we asked what does he remember, and he said he remembered being at all the different hospitals, the one in the woods, cabin and castle, and I said those were the books he was listening to in the coma,” Anderson said. “I thought that was kind of wild.”

“Every time it would start to get low, we put ACDC on and it would come up,” Anderson said.