You are at:Home»Current in Carmel»Carmel Community»Recently retired firefighter urges others to seek PTSD help

Ken Brant isn’t shy about why he is retiring from the Carmel Fire Department after 22 years.

The 56-year-old Westfield resident has been dealing with post-traumatic stress disorder since a run in May 2015 trying to rescue a baby.

Brant, who retired Feb. 11, said the runs add up through the years. 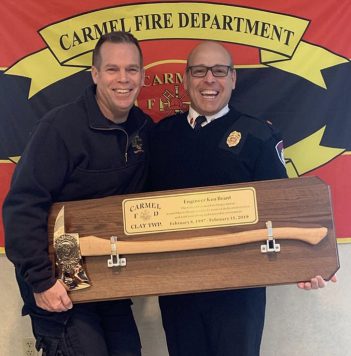 “(Stabbings) aren’t that prevalent in Carmel, but hangings are,” Brant said. “Suicides and bad car wrecks. We went on a run where a guy fell off his roof into an old stairwell. It just wears your brain down.”

Brant said he compared the emotions to blocks stacking up through the years.

“This baby run knocked all those blocks over,” Brant said.

Brant performed chest compressions on the baby girl from the time he walked into the apartment until she arrived at the emergency room.

“We got her pulse back, but at the emergency room, they said she was going to be brain dead,” Brant said. “The father was screaming for us to save his daughter. It was respiratory arrest. I’ve become a big advocate of telling guys to get help through the EAP (Employee Assistance Program) that Carmel or any fire department provides.”

Brant said without counseling, the stress builds up and sufferers start snapping at spouses, kids or pets.

“Physically, I’m tired of getting injured because I’m athletic and ride my road bike all the time,” Brant said. “Mentally, it was hard for me to see people suffering. I had some childhood trauma from my father dying when I was 7 years old.”

Brant said he would be fine during the runs, but would suffer anxiety attacks afterward.

“I’d be cutting a yard, and I’m crying in the backyard like a little baby,” Brant said.

“I still have issues, but it’s taken the edge off of what I used to go through,” Brant said.

CFD Chief David Haboush praised Brant’s willingness to seek help and encourage others to do the same.

“Ken was brave enough to ask for help and I am so proud of his openness while working through his struggles,” Haboush said. “Ken has even mentored other Carmel firefighters regarding the benefits of seeking assistance through the CFD Peer Support Program as well as working with a counselor through the EAP program.”

Haboush noted how Brant, who was off duty, helped save a life while attending Carmel High School’s basketball game at Pike two years ago.

“That was the first time I’ve talked to a cardiac arrest patient (after performing chest compressions). They’ve never woken up before,” Brant

Brant served as engineer and driver-operator of Engine 46.

“Ken possesses a servant’s heart,” Haboush said. “He genuinely cares about and for those he has assisted over the last 22 years.”

Haboush shared Brant’s drive to become a firefighter, finally making it on his 13th attempt. But after his first attempt with Carmel Fire Dept., Brant said it took 1 /12 years for the process. At first, CFD informed applicants it was going to hire two firefighters. It then was announced 18 more would be hired because of the construction of Station 45.

“I figured that was my best chance,” Brant said. “I’m not a professional test-taker. I’m just a grinder. I knew it was a better chance at life.”

Brant, a 1980 Warren Central High School graduate, had previously worked 16 1/2 years at the Dept. of Education in Indianapolis as a printing press supervisor.

The same day he retired, Brant became a grandfather when his daughter, Stephanie Hall, gave birth to a girl. Brant and his wife, Theresa, married in 2007 and moved to Westfield shortly thereafter.