Duane Gauger is not only a double-organ donor, he remains on the national donor register site and is a multiple Transplant Games of America gold medalist.

Gauger, a Fishers resident, donated his first organ — a kidney — in 2009. He gave it to his brother, Gary, who was diabetic and struggling with dialysis. Gauger was a match for the 0-positive blood type Gary required to receive a transplanted organ.

“On June 10 (2009), we did the transplant,” Gauger said. “Eight hours later, I was walking into his room trying to get him out of bed, and a day later, he was up walking around and felt like a new man.”

Gauger was released just a few days after his surgery and returned to work less than a week a week later. 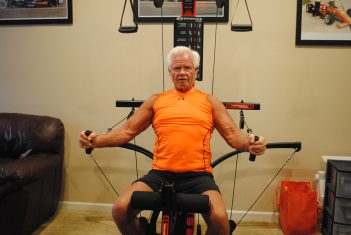 Duane Gauger works out in his brother’s Zionsville home. (Photos by Anna Skinner)

In 2011, Gauger got the opportunity to donate bone marrow through the national register for organ donors.

“I was the reasonable match for a man who had leukemia and was dying and had to have a bone marrow transplant,” Gauger said. “I agreed to it and went in 2011, and that man is still alive today.”

Gauger said the kidney transplant was easy compared to the pain he experienced from the bone marrow transplant.

“That was brutal, painful. They go into your hip and drill a hole in the hip and use a syringe to suck the marrow out,” Gauger said. “The kidney was easy compared to that one.”

But Gauger does more than donate organs and tissue to help others survive. He also competes in the Transplant Games of America in track and field and racquetball. He’s won dozens of medals in several events. He’s attended three of the games and plans to make a trip to the World Games in Newcastle, England, in June.

After his kidney donation, Gauger began work with the Kidney Foundation by visiting schools and encouraging kids to sign up as organ donors. That involvement led him to the Transplant Games of America.

Typically, Gauger is limited in which events he can participate in because he’s a donor and not a recipient. However, he has the opportunity to participate in more events at the World Games. He plans to compete in golf, racquetball, cycling, ballroom dancing (if he can find a partner), team volleyball, 13 track and field events, a 5K race and swim the 50- and 100-yard freestyles.

“They limit living donors to what they can do because they say we have an advantage over recipients,” Gauger said. (Recipients are) on medication, I’m not. But if I’m running against a guy who received a kidney, I’ve only got one kidney. When I go to World Games in June, I can do anything I want.”

Gauger trains at Planet Fitness in Fishers five times a week. When he’s not at the gym, he rides horses and walks or runs 4 or 5 miles in Holland Park in Fishers. He plays volleyball with a team of men on Monday nights.

“You can see me all hours of the night and day, in bright orange shorts and white hair, running,” he said.

Gauger still visits schools to educate students on organ donation. He stresses the importance of being a donor and reminds people they can donate organs while they’re still alive.

Gauger said when a donor dies, their body can be used to save or help 75 people.

“It is quite an honor to watch Duane at the Games.  He embraces everything that the games are about,” she said. “It’s not unusual for others around the country to ask about, ‘That guy from Indiana that has a ton of medals around his neck.’ What I appreciate most about Duane is that he lives and breathes what the Games are all about every day of his life, not just at the Games. Duane is a true testament to the selfless act of being a living donor.

“He has spent every day since sharing his story and showing the world that living donors can continue to have not only a very healthy and successful life, but perhaps even a more fulfilling one after being a living donor.” 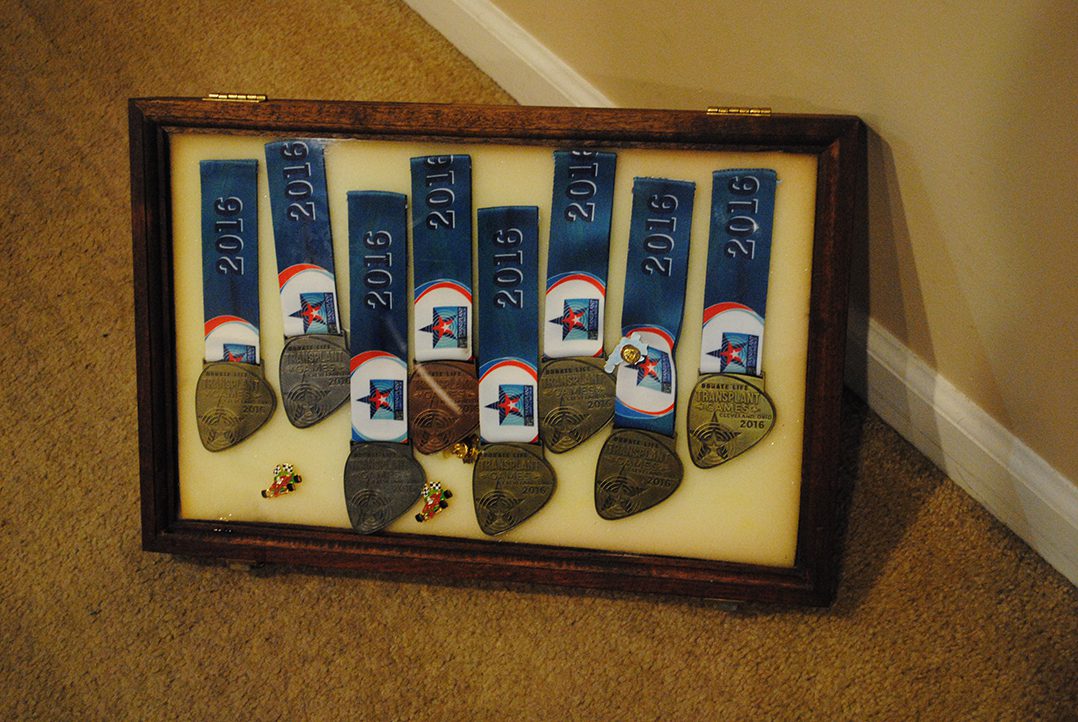 2014: The games took place in Houston. Gauger won two gold medals and one silver medal. “I didn’t know what the Games were about, otherwise I would have entered everything I could,” he said. “Those were my first Games, and I just keep adding events they let me do.”